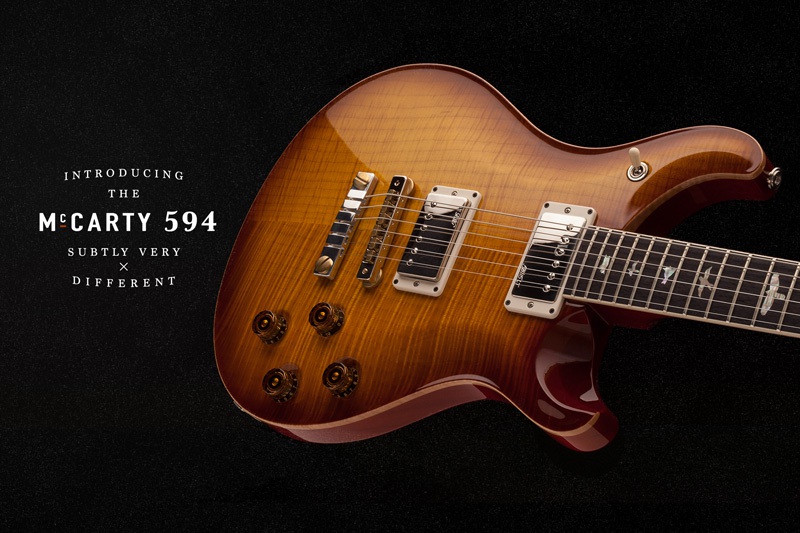 The PRS McCarty 594 is a vintage-inspired instrument that is at once incredibly familiar and effortlessly playable. Whether you are looking for rich, authentic, vintage humbucking tones or nuanced, sweet singlecoil sounds, the McCarty 594 can seamlessly master both sonic territories thanks to the 58/15 LT pickups and push/pull coil taps on the tone controls. The electronics layout, a few key specifications, and PRS craftsmanship combine in the McCarty 594 to create an instrument that plays in tune, is intonated the entire length of the neck, and feels like a guitar that you’ve been playing forever.

“The 594 is the best new guitar I've played in years. It has a vintage heart and soul but without the technical limitations that usually come along with an old instrument. What good is an old guitar if you can't get all that feel out of the upper frets, or the intonation is off? To hear that old PAF sound but be able to articulate the notes in a way that only modern manufacturing could allow is so exciting.” - John Mayer

A few key specifications that contribute to the McCarty 594’s tone and feel are:

- 2 volume and 2 tone controls positioned so players can roll off both volume knobs at the same time.

- The added versatility of push/pull coil taps for each pickup for more tonal options.

A new Pattern Vintage neck carve, which shares the same width measurements as PRS’s Pattern neck but is slightly thicker front to back and features an asymmetrical carve with a little less meat on the treble side and a little more meat on the bass side of the neck.

Tweaked Phase III tuners that have an added set screw that pulls the tuner’s shaft, gear, and worm together (but take the tuner button out of play) to promote tone transfer from the string directly into the guitar itself with as little energy as possible begin detracted.

"It's engineered beautifully and really lives up to the idea of getting the best attributes of an old instrument, I love the two volume/two tone layout, while still keeping the overall feel of a PRS. The pickups sound great and really have the vibe of old PAF's that aren't wound too hot," said Jimmy Herring of Widespread Panic

The McCarty family of instruments from PRS is named after Paul’s longtime friend and mentor, Ted McCarty, who was president of Gibson during the “golden era” of guitar making. Ted McCarty left an enduring legacy that serves as an inspiration to guitar makers and musicians worldwide. The McCarty 594 pays homage to this legendary man and traditional vintage tones.

Guests attending PRS Guitars’ “Experience PRS 2016” open house event on June 3 and 4 can look forward to checking out these instruments in person.