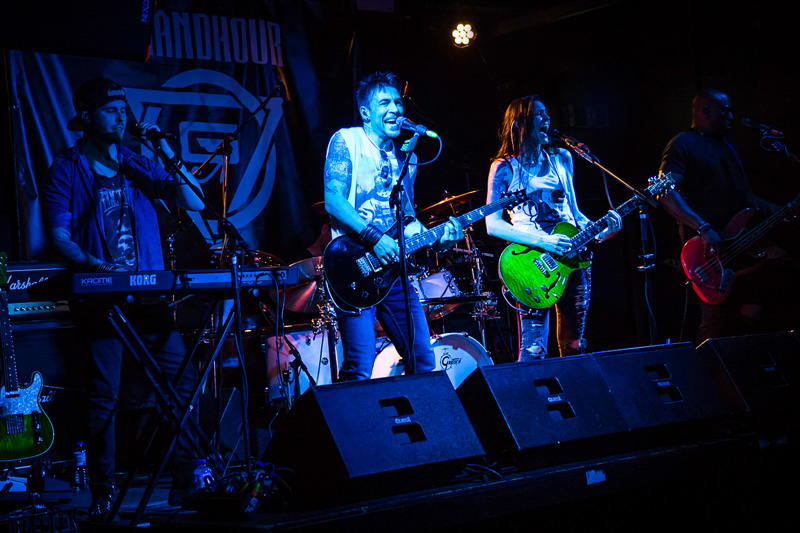 The album has been classified as “authentic modern rock” and it is its authenticity that is key. With emotive lyrics and vocals, in-your-face rock guitars, massive drums, throbbing bass, and soaring solos, Grandhour's strong melodies and catchy chorus hooks will be stuck in your head for days! This is an album of many layers and deep mixes that will take a number of listens to fully appreciate - and that’s part of the journey - every song has a message and makes you want to hear it again and again. To those in the know, the quality of the album is no surprise: the project has been almost 10 years in the making and anticipated widely. After spending over 7 years building their own professional recording studio and starting their own record label ‘Rock Hawk Records’, band members Nicole Hawkins & Jason Hawkins spent over 2 years recording and producing the Grandhour album. With mixing shared by LA industry heavyweight Paul David Hager (Goo Goo Dolls, Hooberstank, Miley Cyrus, American Hi Fi) and Jason Hawkins and mastering by the legendary Stephen Marcussen (Audio Slave, Foo Fighters, Black Sabbath, U2) in LA, the tag “the next big Aussie rock act” is on the money. Grandhour features Nicole Hawkins (dubbed “the new ‘queen’ of Australian Rock”) on lead vocals & guitar, Jason Hawkins (Big Radio, Jimmi Christo, Taxiride) lead guitar/vocals, New York born Jerome Smith (Keith Richards, Divinyls) on bass, Mark Hawkins on drums, and Chris Lugton (KillShott, Guest guitarist with Sodom) on keys & guitars. Empowering & thought provoking, Grandhour have something to say, and you’ll want to hear it - up loud! Below, we caught up with PRS artists Nicole and Jason to learn more about their musical styles, gear choices, and inspirations. 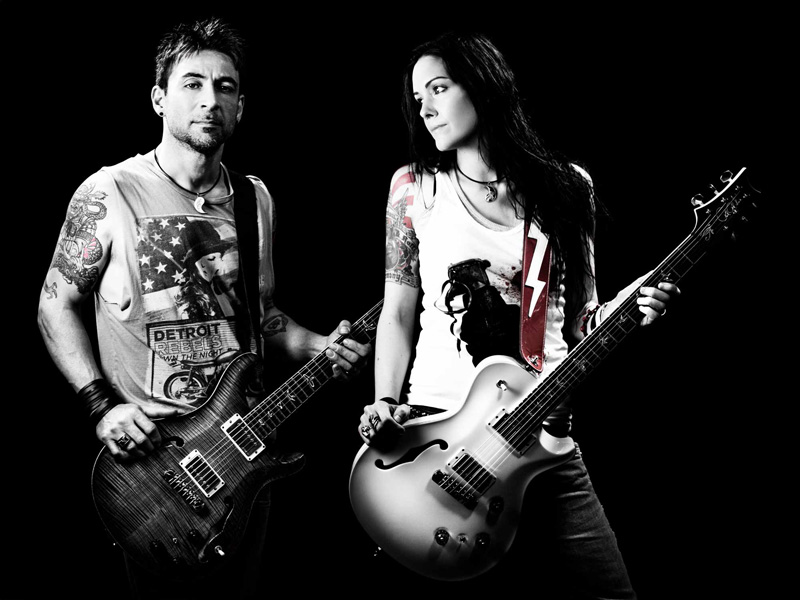 PRS: Who were some of your biggest musical influences? JASON: Iron Maiden, AC/DC, Van Halen, Steve Lukather, Brian May NICOLE: Queen, Hendrix, Carol King, U2, Led Zeppelin, INXS, Jeff Buckley PRS: How would you describe yourselves stylistically? Nicole’s songwriting style comes from a storytelling folk background, whereas Jason’s guitar influence is very much taken from classic hard rock. Grandhour’s music is usually described as Melodic Hard Rock. PRS: Jason, what attracted you to the Hollowbody II and Custom 22? Jason: My Custom 22’s are tonally the most versatile guitars I’ve ever used. They can produce pure classic rock tones of any variety, plus amazing modern tones. Their intonation and feel is second to none. They are my workhorses for both studio and live, but at the same time are beautiful pieces of art which I love to look at as much as I love to play them. The Hollowbody II is the guitar I pick up when I need to be inspired and am looking for something extra special. There is a uniqueness about its depth of tone so I often reach for it when writing guitar solos. PRS: Nicole, what attracted you to the P245? Nicole: The P245 is an amazing guitar because it allows me to get an acoustic guitar sound where I need it, or blend it into my electric sound - or go into full blown hard rock awesomeness all with the flick of my wrist! It is definitely the one guitar I cannot live without and would be the one guitar I would save in a fire if I had to choose one! 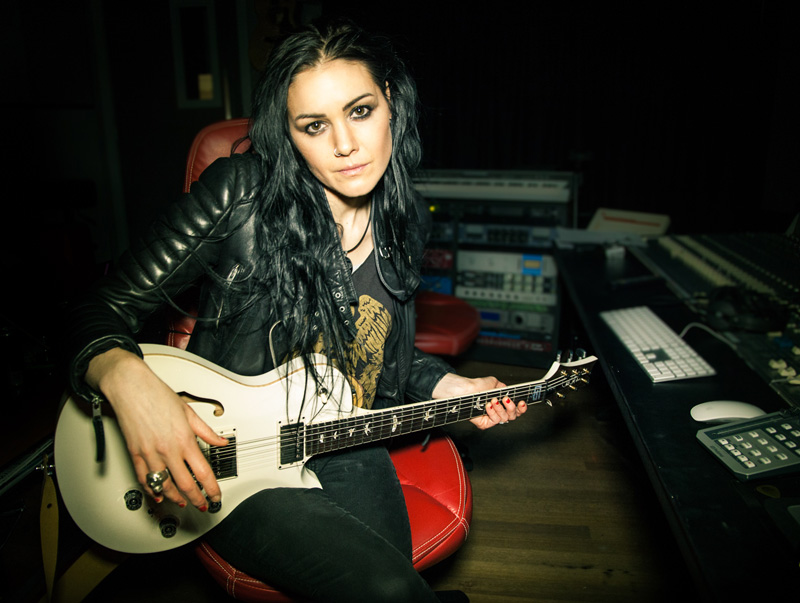 PRS: What do you practice - exercises, new tunes, hard tunes, etc.? JASON: I practice a mixture of technical exercises and soloing over all sorts of tracks. I try to spend time writing riffs and solos for new songs we are working on. I also practice our set list including my solos to make sure I feel sharp and confident for our shows. NICOLE: I do vocal exercises every day and usually practice playing guitar and singing a mixture of songs from our set and new songs we’re working on. If the mood strikes and I feel inspired, I will do some songwriting as well. PRS: Describe your creative process when writing and recording the material on the debut album Bombs and Bullets? NICOLE: When I’m writing, I like solitude, so I lock myself away and let the emotions flow through me. Generally speaking, the main lyrical content (of what the song is trying to say) and majority of the melody and chords will all come through me all at once. Some songs come together really quickly, others take a bit of honing and lyrical refinement to complete and can take weeks to finish. Once I finish a song, Jason and I workshop it further for any alternate chords and vocal harmonies. The songs that ended up on the album are a mix of songs I had written over a long period of time. Some were newer, some older, but for us it was about taking the listener on a journey with enough musical variety to keep the album interesting, while still having the right things to say. For me, the lyrical message in a song is very important. JASON: We short-listed around 30 of Nicole’s songs and she and I honed them for arrangement and parts while we were finishing the building of our studio. Then we demoed 20 of them in pre-production with the band. From our demos we selected 11 songs for the album. The recording process in its entirety, including mixing, took about 2 years of intensive daily work. We worked hard on the production and tonal quality, making sure the instrumental and guitar parts always enhanced the mood of the lyrics and songs. 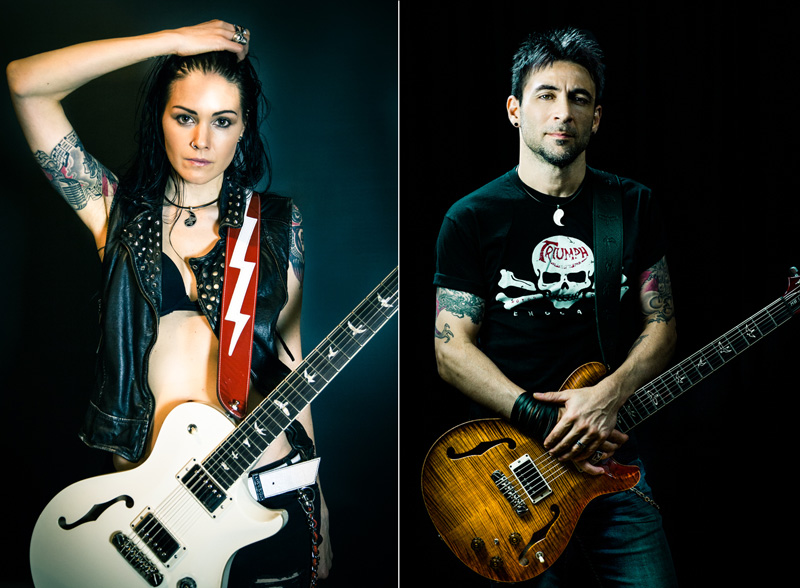 PRS: When you aren’t writing music or touring, what do you like to do during your free time? There isn’t time for much else other than music in our life between writing, recording, rehearsing and playing, but when we do have some free time we like to spend it with our close friends and family. JASON: I like to clear my head with a ride on my Ducati motorcycle. I also play squash or racket ball every week to try and keep in shape. I also won’t say no to the occasional trip to the snow for a day or two of snowboarding in winter! NICOLE: When the sun comes out I like to get out on my longboard or bike for a cruise! I collect vintage and new school skateboard decks (for their stylistic artwork) and have them hanging in my office. I’m a photographer, graphic designer and artist and I love to paint or get creative with some form of art in my free time.