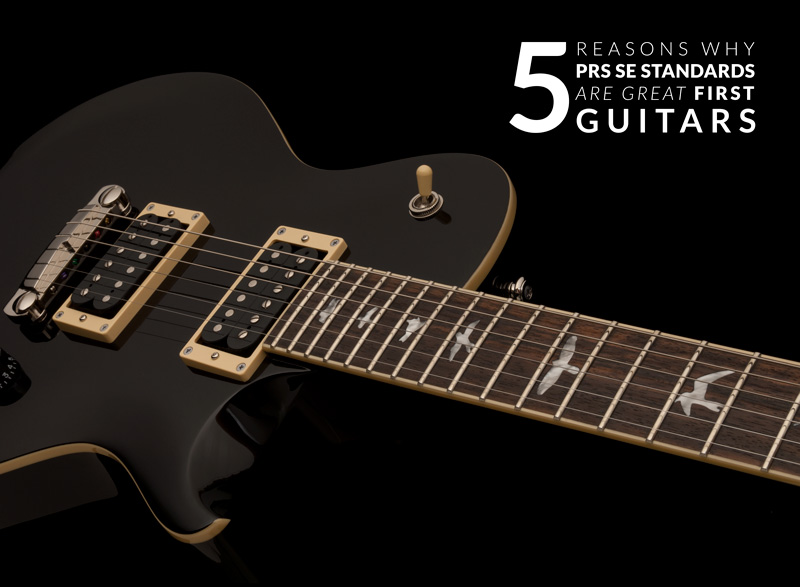 Recently we announced a new line of SE guitars called the “SE Standards.” We released four models in total: the SE Standard 22, SE Standard 24, SE Standard 245, and the SE Santana Standard. The release of these models brings to market the most affordable PRS guitar to date — $499. However, our only concern wasn’t the price; we wanted a quality, great-feeling, and great-sounding instrument. Here’s why we believe the SE Standards are great for first-time guitarists (or seasoned musicians).

1. PRS Design
Proprietary is a word we use a lot here at PRS. Proprietary designs are what make a PRS a PRS. Paul and our team spend a lot of time inventing (and re-inventing) pickups, bridges, and other materials to make our guitars the best they can be. Even though our SE parts are built by a partner manufacturer, the design of our quality parts are created by PRS and Paul himself.

2. USA Inspection
We choose the manufacturers of our SE instruments very wisely and trust them to build at the high level of quality our customers expect. Even so, every SE guitar sold in the US first comes to our Maryland factory for a strict quality inspection and set up. European-sold SE guitars are set up and inspected by PRS Europe and other SE guitars sold to the world are set up and inspected by our trusted network of PRS distributers. Your SE Standard will be given the attention to detail it deserves before you play your first note.

3. Tone and Playability
Because of our strict quality standards, you can expect the SE Standards to play and sound great right out of the box. Intonation, action, and tuning stability are important! Whether you are learning to play or playing a few gigs a week, you don’t want to fight with your guitar! During the research and development of these models, we set the bar high for the tone and playability we expected, and we believe we hit the mark.

4. Affordability
The SE Standards are affordable, just $499. More hardworking musicians can afford a PRS without breaking the bank.

5. No Need To Upgrade
When new guitarists are learning to play, they will typically start with a sub-par instrument. If the SE Standard is your first choice, you won’t need to upgrade to “real” guitar - you have one! And you’ll be more satisfied with your tone.

Check out this video to see an overview of the SE Standard models!