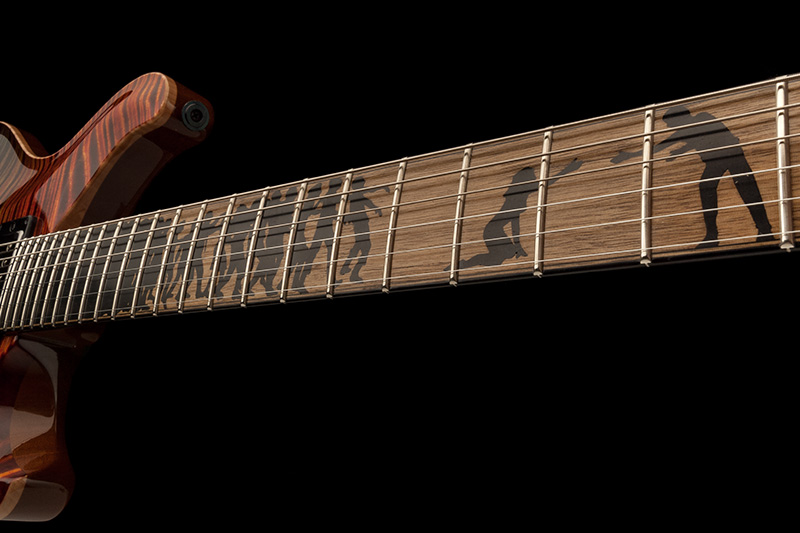 Some of the most unique guitar building and experimentation takes place in our Private Stock department. When customers and dealers come up with ideas, our Private Stock folks get inventive to make it happen. Connecticut based dealer, Brian's Guitars approached us with an idea for a zombie-themed guitar, we brought it to life.

We believe the story of our first "Walking Zombie" guitar would be best told in the form of a Q&A with Brian's Guitars main man, check it out below!

Zombie inlay is coming for you. This one is going to @briansguitars. pic.twitter.com/2Ecszd0bKv

PRS: Well, right off the bat, the most striking thing about this guitar is the inlay, how did you land on zombies?

Brian: The zombie theme started with the first zombie-fade finish guitars. It was a finish color that the PS team developed, we asked them to alter it a little bit and the mix of earthy tones fading in to greenish/purple gave us a strong zombie vibe. This inlay takes the theme a step further!

PRS: Explain the development process, how did you work with our Private Stock department to bring this inlay idea to life (no pun intended)?

Brian: Always a bunch of comedians down there at PRS! Once we saw the original Birds Of A Feather fretboards we started to bounce ideas off the Private Stock department about doing a similar style but with zombies. It worked out nicely to have the zombies emerging from the solid black ebony. We went back and forth with the PS team on some design ideas, but that never takes long, they always nail it right away. We wanted to keep the bird theme on the headstock. We had all sorts of ideas...eagle holding a skull...eagle shooting a bow and arrow at the moon...eagle driving a monster truck...Paul's face with the body of an eagle. But, we landed on a simple vulture on a branch :) 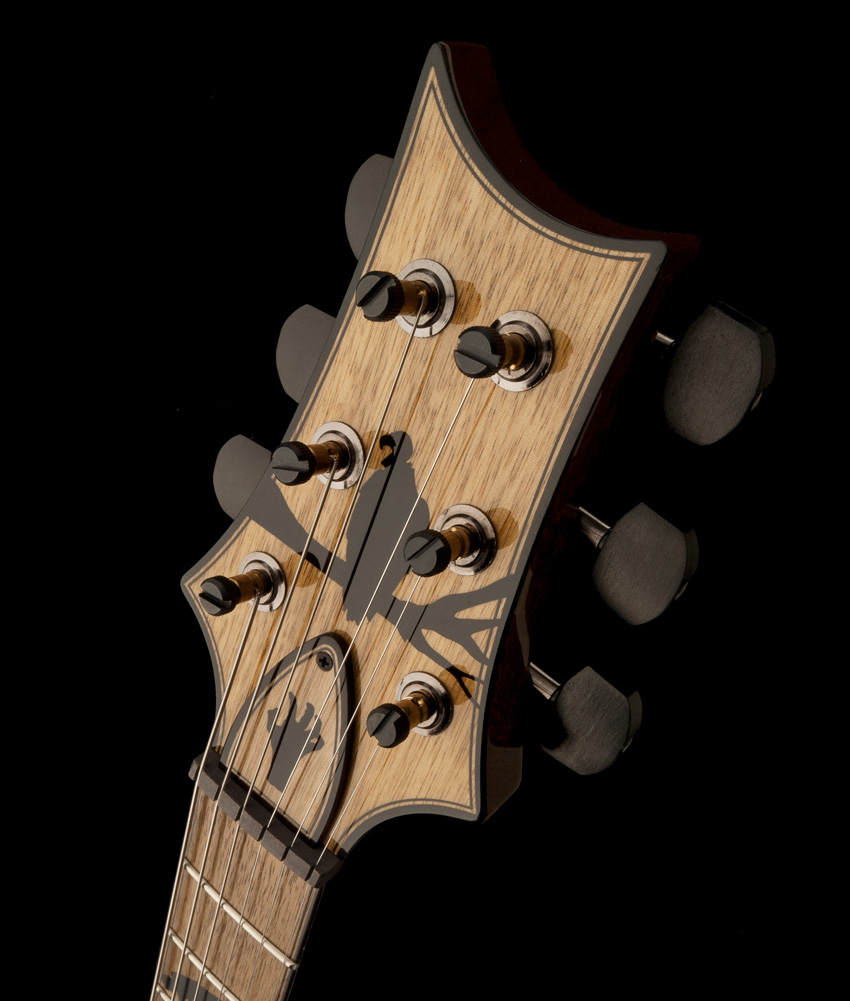 PRS: Which camp do you fall into, fast zombies or slow zombies?

Brian: I think we can all agree that fast zombies would be way worse. Imagine trying to run away from Usain Bolt zombie...or swim away from Michael Phelps zombie...no way. Total nightmare.

Brian: I have some friends who are much bigger horror movie fans than I am. They tell me the right answer is the original Dawn Of The Dead. I thought the fast zombies in 28 Days Later were pretty terrifying. For me, the best zombie moments in TV and film are from The Simpsons Treehouse of Horror III. Two scenes to prove that: The first is when Homer shoots zombie Flanders with a shotgun and Bart yells 'Dad you killed zombie Flanders!' Homer replies with 'He was a zombie?' The second is when the zombies come for Homers brain...the zombies then tap on his head, realize there is nothing in there and move on to the next victim. Best TV show of all time.

PRS: When developing the stain color, conveniently named "Zombie Fade" did you know what colors you wanted to be a part of the fade, what inspired it?

Brian: I answered some of this above. The color was actually already somewhat developed, we just asked the Private Stock team to alter it a bit to fit the zombie theme. The first zombie Fade guitars made did not include any of the bright blue/purple colors. We thought the orange/green/gray vibe had more of a zombie feel...the blues and purples took it in to a whole different dimension. 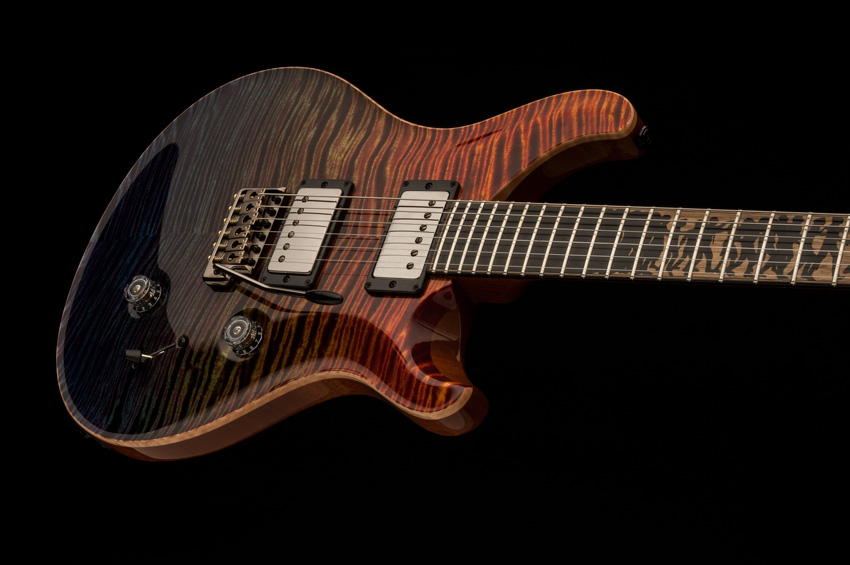 PRS: What canned food could you eat for a year during a Zombie apocalypse?

Brian: Ugh..I don't even know. Spaghettios? I'd probably end up with Twinkies. Those never go bad, right? Maybe I'd just let the zombies get me.

PRS: When choosing the model type, why did you lean towards the Custom 24?

Brian: We thought a Custom 24 would be the best idea for the first from this run. It's the classic PRS staple. We have some others on order that we got a little crazier with:
- Seven String Custom in Frostbite Glow with Ebony zombies and curly maple background stained light charcoal
- McCarty Singlecut in Zombie Heart finish with Ebony zombies and Pink Ivory wood background
- McCarty Stoptail in Laguna Dragons Breath finish with Curly Maple Zombies stained green with Ebony backround

PRS: What would be your #1 weapon choice in a fight against zombies?

Brian: Shrink Ray, then giant boots to step on the mini zombies. Didn't think that would be my answer, did you?

PRS: Tell us about the wood and pickup choices you made.

Brian: Every time we go to the Private Stock Vault we do our best to pick the best of the best woods in that room. Everything is great in there, but you can really cherry pick the room if you take the time. We picked the best quilt and curly maple tops we could find. We mainly stuck to Mahogany necks and bodies on these to keep the actual tone and feel of the guitar a little more 'normal' than the looks! On this first one, we went with the \m/ humbuckers because we figure the folks interested in these guitars will be interested in a bit of a hotter tone.

PRS: Anything else people should know about your first Custom 24 Walking Zombie guitar?

Brian: This first Walking Zombie guitar is very special to us here at Brian's Guitars. We put a lot of time into picking the woods, specs, and working on the design with the Private Stock team. The Walking Zombie is everything we love about what we do. This guitar was displayed at our table at the PRS Experience 2016 event. People would walk by and say 'there's the zombie!' and things of that nature...it was really cool to see people from all over the world loving the guitar and knowing about the guitar. We love to go a little off the wall and a little out of the ordinary on the looks and design, while still making sure to pick the absolute best tonewoods and specifications to make it a great playing and sounding guitar. Being a PRS dealer is a lot of fun that way, the Private Stock department will work with us on these ideas. If you don't get a little weird with it, what fun is it??

Full specifications for the Private Stock Custom 24 Walking Zombie available in our gallery.