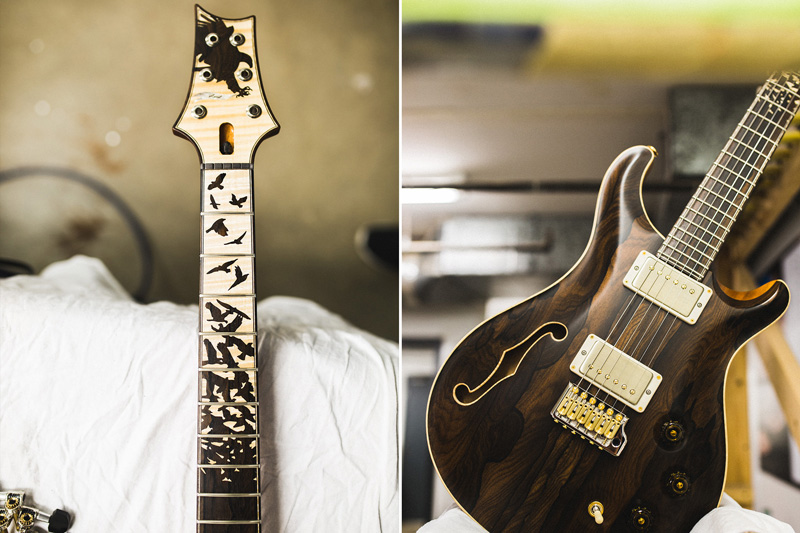 2016 is a special year because it celebrates the 20th Anniversary of our custom shop, affectionally known as Private Stock. For this anniversary year, Private Stock is bringing back the “Guitar Of The Month” program - a new experimental guitar design will be released in small numbers each month of 2016! Learn more about the April Guitar Of The Month below!

We call the April Guitar Of The Month, the “DGT Birds of a Feather Semi-Hollow.”

DGT BIRDS OF A FEATHER SEMI-HOLLOW

The April Guitar Of The Month pulls inspiration from a number of unique PRS designs and joins them together in one elegant package. While many of the electronics specifications come from our popular DGT (David Grissom Trem) model, the aesthetics of this instrument are taken to new heights with exotic wood pairings. 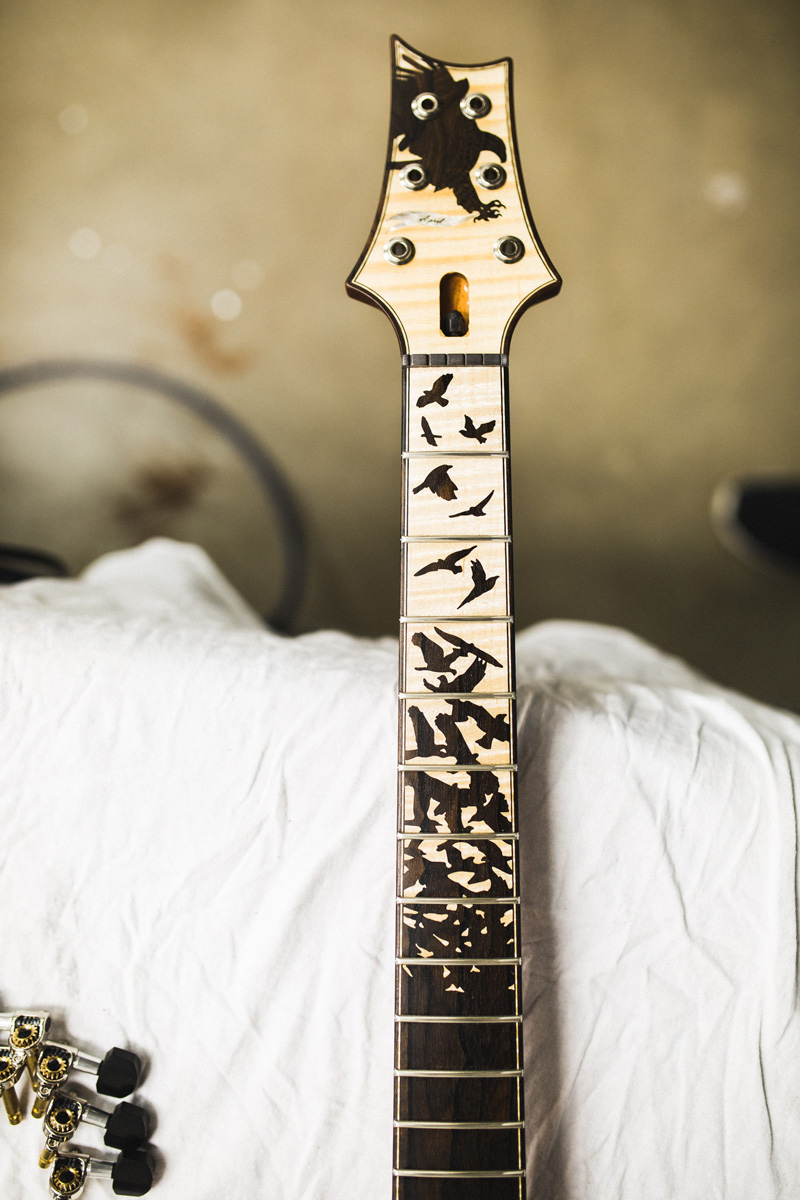 The neck of the April Guitar of the Month features the PRS “Birds of a Feather” inlay made from Ziricote and curly maple wood. The idea for the “Birds of a Feather” inlay was originally developed through the PRS Private Stock Acoustic shop where it rose in popularity. The process to create the fingerboard takes extraordinary attention to detail and we partnered with local inlay specialists, Pearl Works, to develop and bring the design to life.

Pearl Works president Bill Seymour was heavily involved in the process, “Daniel Panza, one of our designers, worked closely with Paul Miles in the PRS Private Stock department to create the modified Birds of a Feather inlay. At Pearl Works a large portion of our work uses shell as the primary inlay material. The subtle beauty of wood into wood inlay on this project makes Birds of a Feather one of our favorite and more unusual collaborations with PRS.”

More wooden inlay continues at the top of the neck, where the headstock is adorned with a large Private Stock eagle and a Mother of Pearl “April” engraved banner. 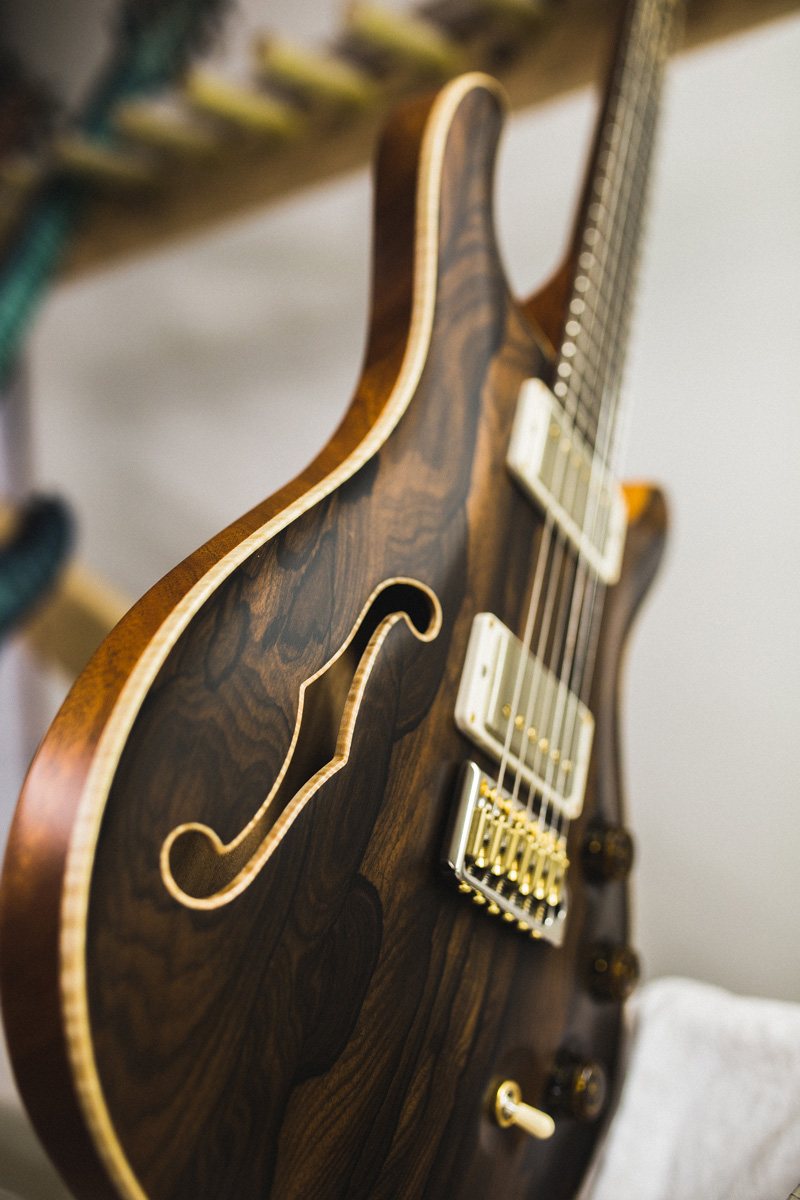 The top of the guitar is made of Ziricote and sprayed with a natural satin nitro finish. A curly maple binding contrasts beautifully around the body and f-hole, and was meticulously hand-crafted by members of the Private Stock team. The back of the body is made of African Ribbon Mahogany and uses matching backplates from the same cut of tree! 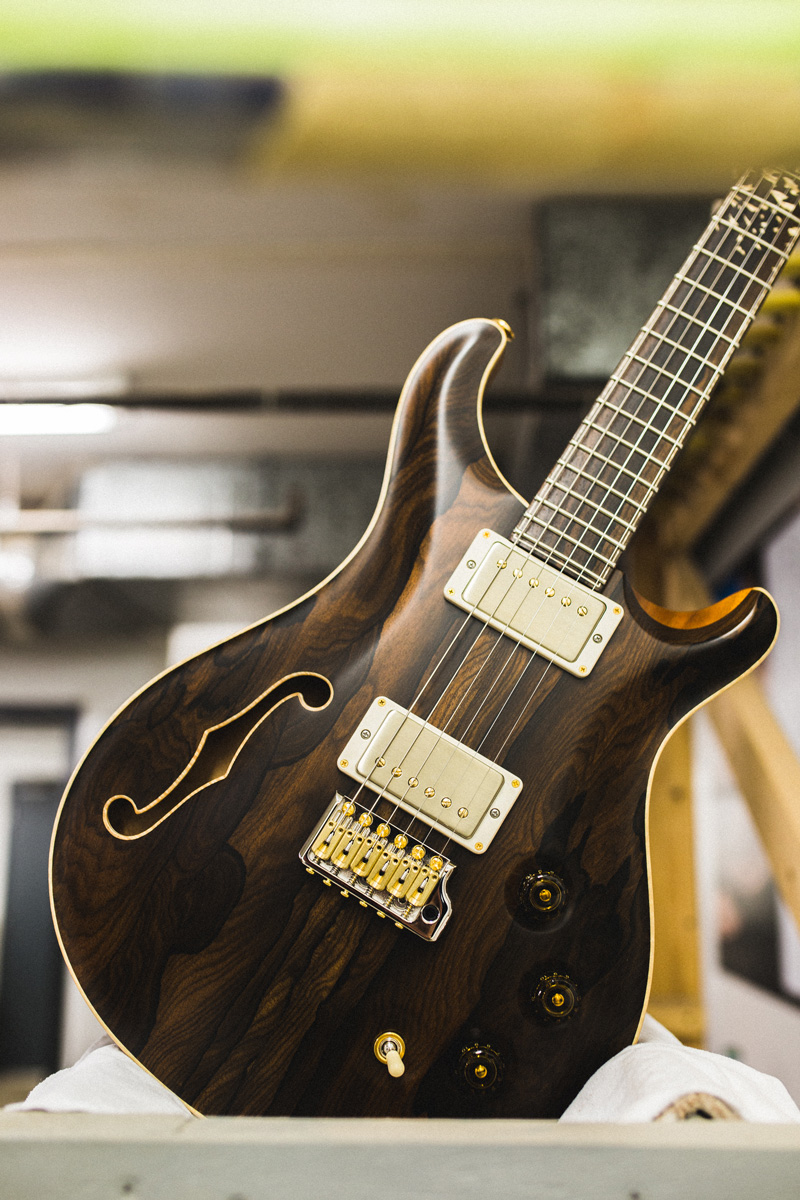 As previously mentioned, the electronics specifications are taken from our popular DGT platform. The April Guitar of the Month utilizes a dual humbucker layout controlled by a simple yet elegant 3-way toggle pickup selector. Two volume and one tone pot are wired so that the tone control acts as a push/pull to coil-split the DGT treble and bass pickups for versatile single-coil tones. 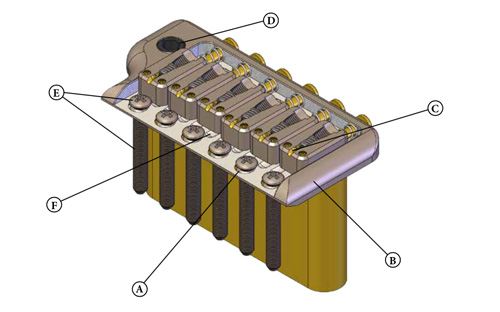 A special guitar deserves high-quality materials and hardware. The DGT Birds of a Feather Semi-Hollow utilizes Paul Reed Smith’s latest Gen III Tremolo design with Locking Saddles. As always, the bridge is machined brass, a metal that rings beautifully. The block, intonation screws, height-adjustment screws, and the string slots on the saddles are all left un-plated for increased sustain and fidelity of tone.

Here’s a closer look at the details:

A. The mounting screw holes are countersunk from underneath, creating a knife-edge set-up that ensures the bridge will return to pitch after use.

B. The bridge’s sidewalls create a pocket that keeps the six individually adjustable saddles from moving sideways, thereby eliminating another traditional cause of tuning instability.

C. The saddles feature a compound radius so that the string breaks across the saddle at the optimum angle for contact and vibration transfer through the bridge. The Private Stock Gen III Trem also features locking saddles. These saddles hold the ball ends in place preventing any movement in the block and further ensuring the guitar returns to pitch after use.

D. The tremolo arm is unthreaded and features a small set screw that allows the player to customize the feel of the arm and find a comfortable playing position.

The Gen III Tremolo functions in all the same ways as PRS’s patented tremolo always has, but includes notable design updates that further support the fidelity of the guitar’s tone and maximize sustain.

E. The mounting screws have been redesigned with larger thread and a larger custom head. This added mass creates more contact from the screw to the bridge and the guitar’s body, resulting in greater sustain.
F. Grooves have been added to the bridge plate. The grooves are radiused to match the radius of the height adjustment screws, again so there is more contact and a better fit.

Fear not when using this tremolo fiercely, the April Guitar of The Month also uses PRS Phase III locking tuners with beautiful ebony buttons - you can play hard and stay in tune.

The April Guitar of the Month will be built in a limited quantity of only 20 worldwide. Dealers and availability can be found at the bottom of this page.

Below, check out some behind-the-scenes photos of the DGT Birds of a Feather Semi-Hollows being built. 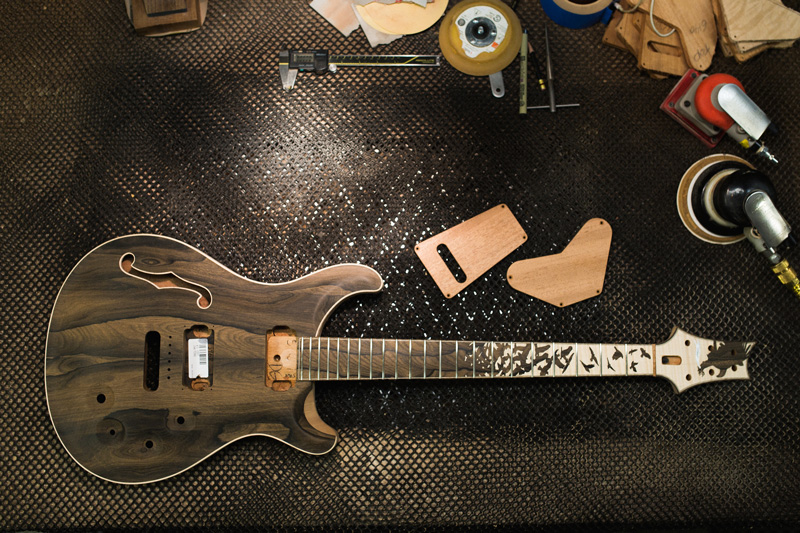 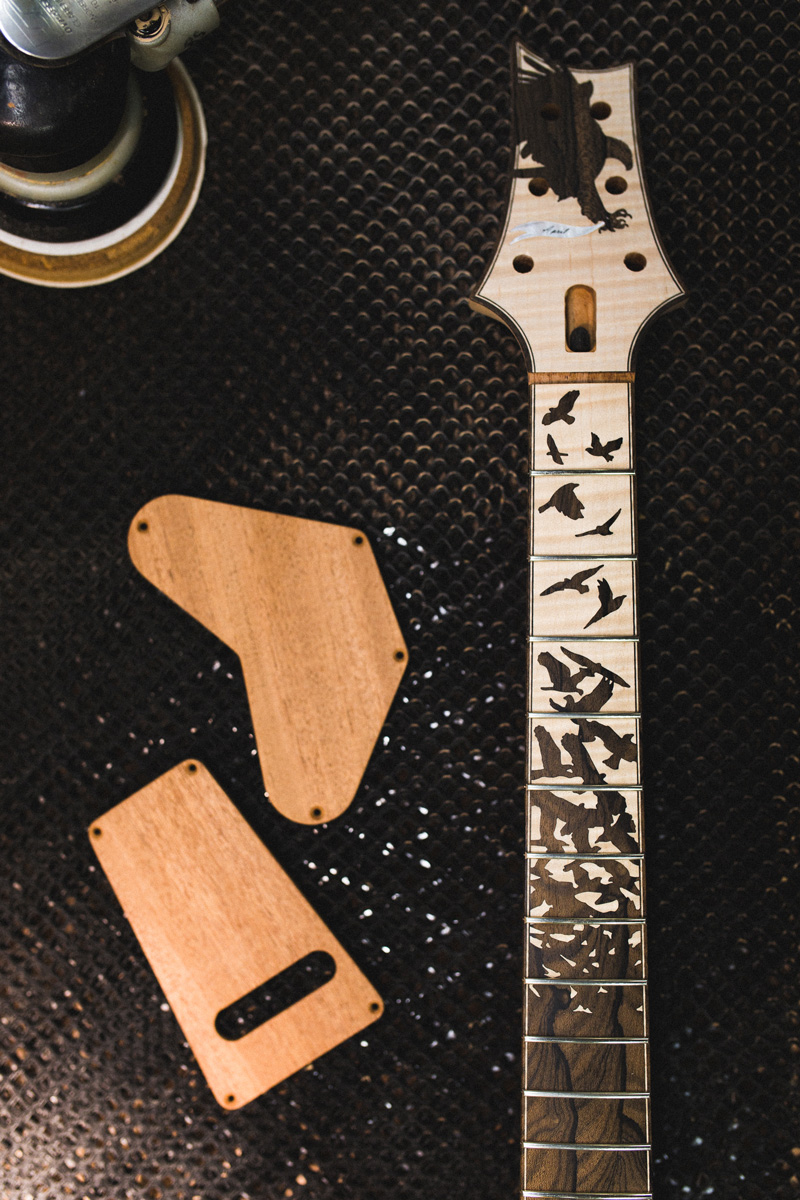 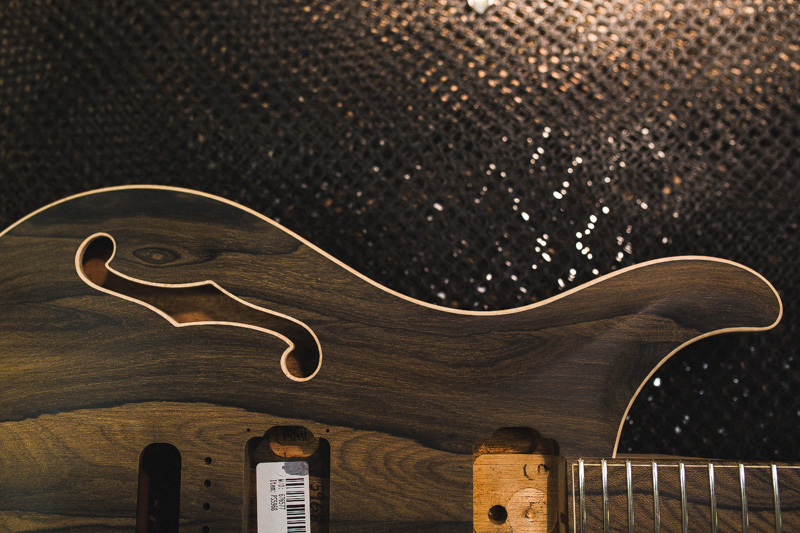 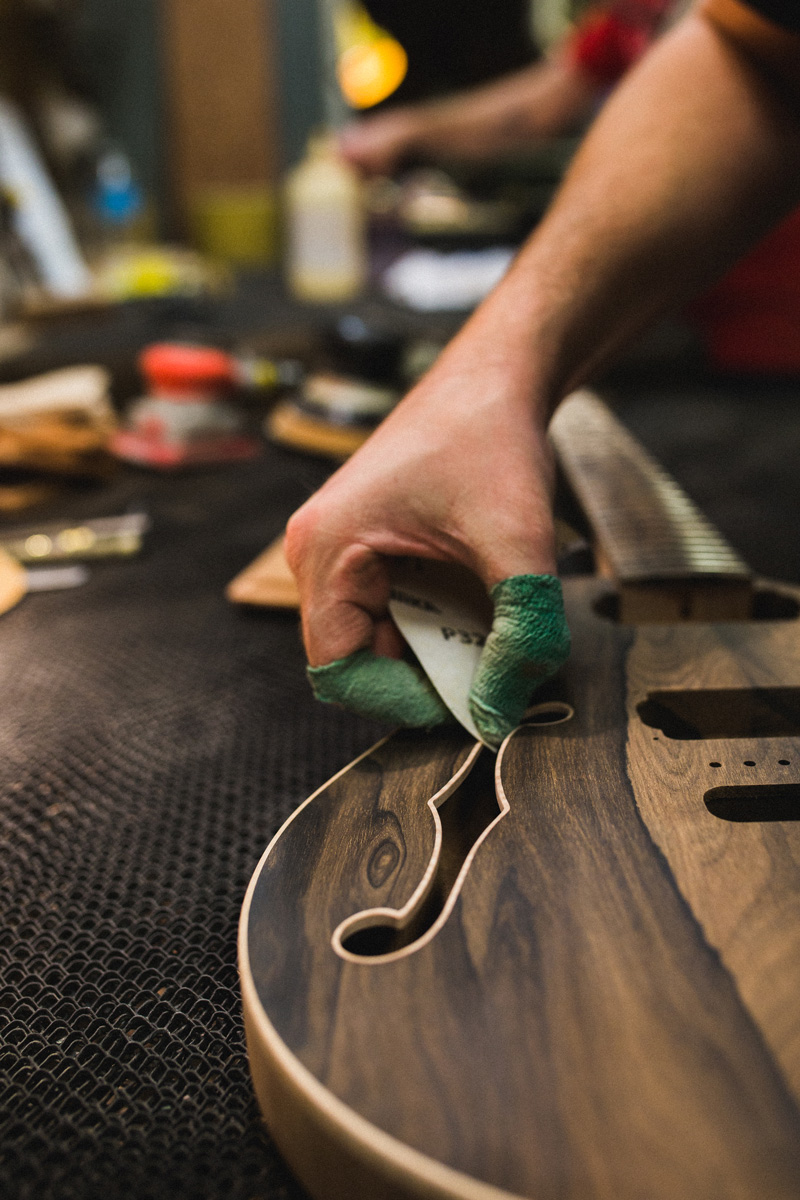 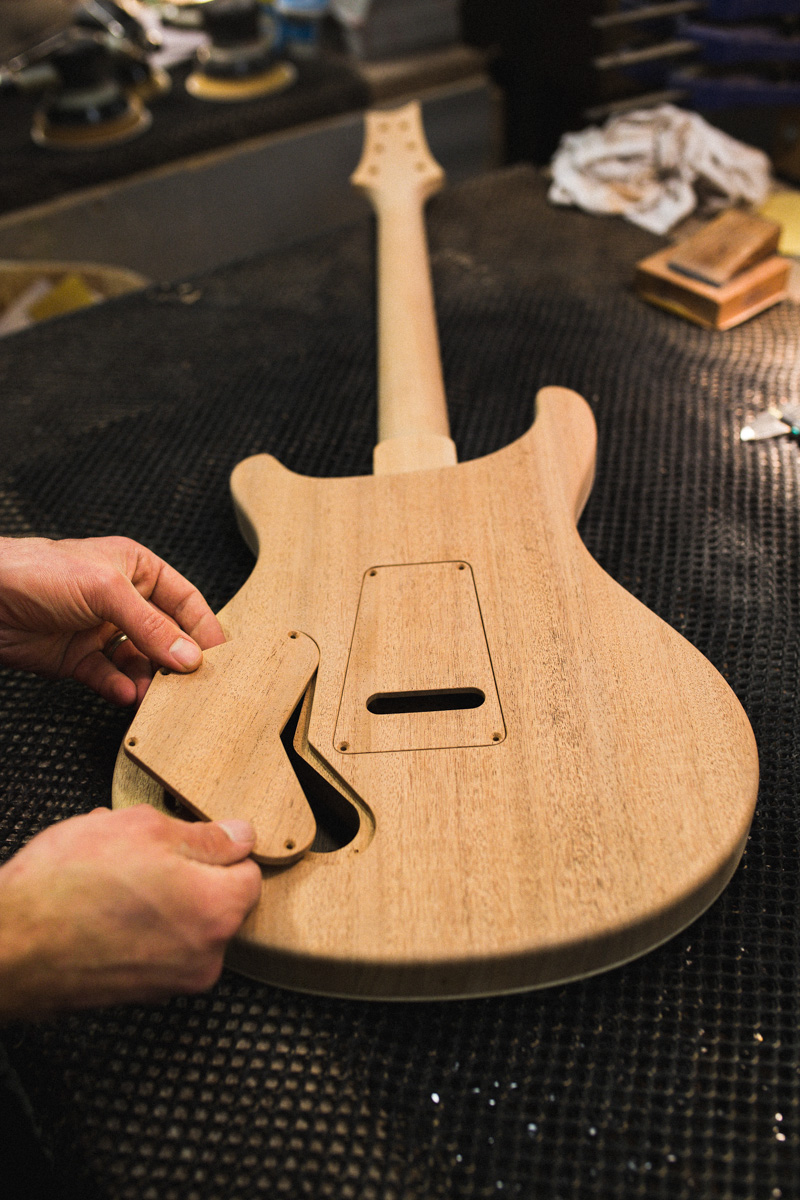 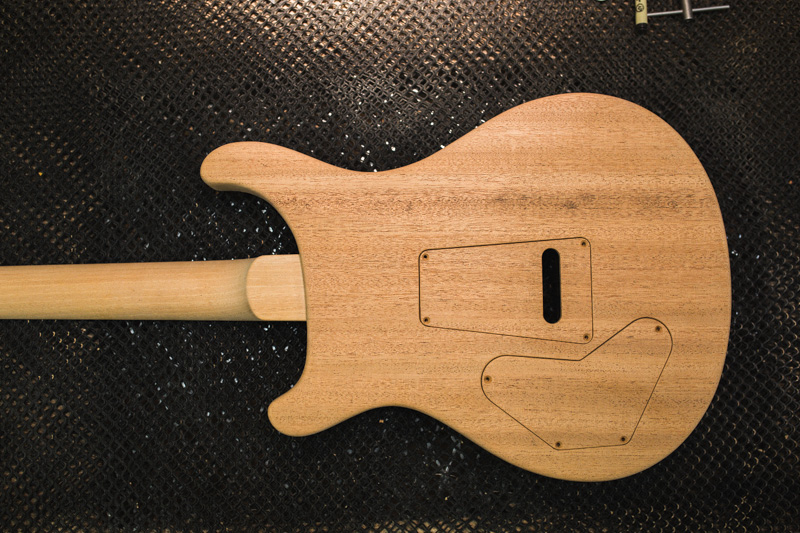 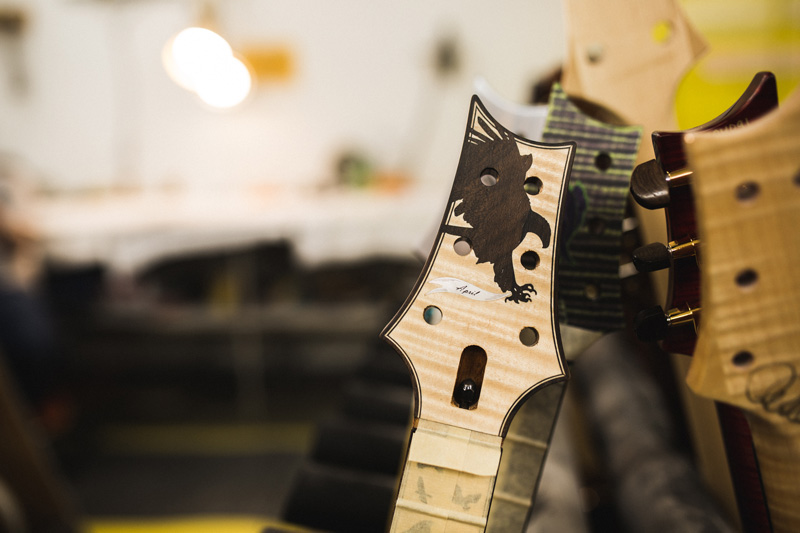