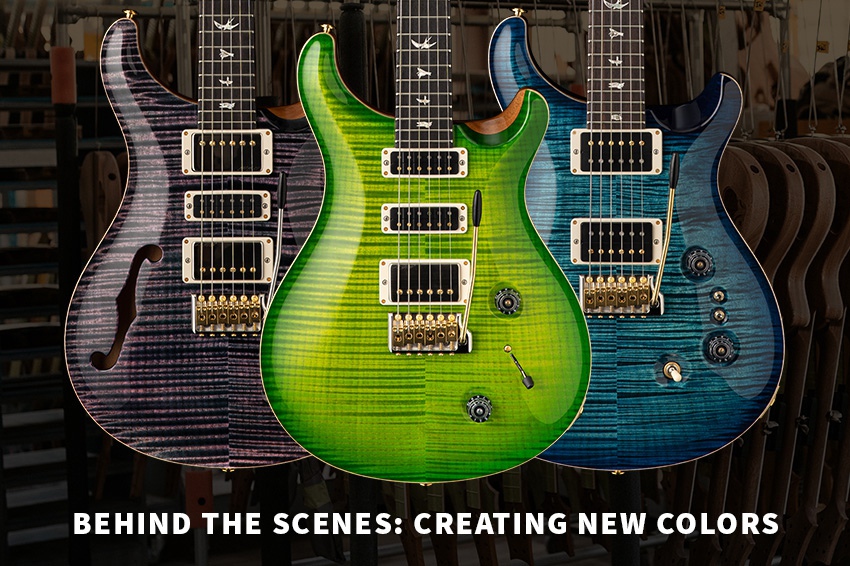 At PRS, the process of creating new colors is collaborative, a bit time consuming, and a ton of fun.

When a guitarist sees a PRS color for the first time, our goal is ‘aesthetic arrest’ - a finish that takes your breath away. For 2021, we added three new finishes to our lineup: Cobalt Blue, Purple Iris, and a classic favorite, Eriza Verde. To help tell the story of how we bring new color offerings to the world, we interviewed two key employees who are heavily involved in the process.

At PRS, how do we add a new color to our lineup - what is the process like?

Jim: Each year I ask for a series of new colors to review. Our finish team members are the experts so I like them to have the creative control of what is brought to the meeting.

In that meeting we have key team members from both our finish department and production department. We’re all looking for the same thing, aesthetic arrest when we first see the color. It always starts with samples on maple blocks, if we find consensus on a particular color we then run it on sample guitars. We don’t always know if the color will translate well from a sample block of wood to a full instrument. We’ll run the color on both 10-top maple and non-ten maple - “10-top” is a PRS grading system for the depth and amount of figuring on our maple top guitars.

Once we see the sample guitars - if we still have that ‘aesthetic arrest,’ we know we’re on to something. I’ll keep the samples in my office and I like to show them around to employees & dealers [back when we could travel] to get more feedback.

^ Jim Cullen inside his office at PRS - a place where he keeps a number of in-process color samples and solicits feedback.

Matt: From a research, development, and production standpoint, we need to strive for consistency in color. Figured maple comes in different hues, ranging from shades of darker yellow to lighter white. We test colors on both dark pieces of maple and light pieces of maple, different shades of a color will show up depending on how light or dark the top is. Eriza Verde for instance… if the hue of the wood is more yellow, the color will be a little more yellow and lime. If it’s a whiter piece of maple, it tends to lean a bit more blue.

We also have two UV booths which we use to replicate large amounts of direct sunlight on the guitars. We run the booth at high power to see how it holds up, it essentially replicates 5 years of direct sunlight. We’re able to see if the color will fade over time. When we’re developing the color, we also need to make sure it’s production friendly, meaning the color will be consistent, repeatable, and won’t take too long to create. Some of our colors are really involved from a production standpoint. At the end of the process, we want the maple top to really pop.

How did you land on Cobalt Blue, Purple Iris, and Eriza Verde for 2021?

Jim: With Cobalt Blue, blue guitars seem to sell well here at PRS. It’s also tied to our company’s history - blue was one of the original three colors Paul Reed Smith brought to the public at our first NAMM show in 1985. Cobalt Blue is just an extension of that - it was developed by one of our finish team members, Jordan, and he knocked it out of the park.

We asked Jordan (photo below), our Basecoat Quality Control team member about developing Cobalt Blue, “I stayed late after work and taught myself to stain. With Cobalt Blue my goal was a blend between a dark blue and light blue. The base of Cobalt Blue is actually Faded Whale Blue, a popular color here at PRS. I worked on it last summer when they were taking new color submissions for review and the team really liked it.”

Jim: For Purple Iris, we knew our older color Violet had run its course and we wanted a new purple. John, one of our stainers, brought Purple Iris to the table and it had that aesthetic arrest we were looking for.

Give us the full ‘Eriza Verde’ story.

Jim: Eriza Verde already has a history at PRS, many years ago, I think it was around 2011, I saw a color sample in the corner of Matt’s office. Matt told me it was just something he was messing around with. I insisted he run the color on a full guitar.

Matt: That color sample came to life because I wanted to create something almost obnoxiously bright, like a highlighter. I didn’t think anything would come of it, then Jim essentially dared me to run it on a sample guitar.

Jim: When the guitar showed up in a quality meeting PRS President Jamie Mann (then VP of Operations), saw it and bet us two cases of beer that we wouldn’t sell 100 of that color. Little did he know I had already sold 200.

Matt: For the first three months of its release in 2011, I think it was the most popular selling color. Now it’s back for 2021 - and that reminds me that I think Jamie still owes us that beer.

^ Matt Eriza holding "Eriza Verde" inside the finish hall. This guitar, an S2 Custom 24, is available in Eriza Verde for the first time in 2021.

Jim: When it came time to name the color “Eriza Verde”, I knew we wanted to honor Matt for creating it (like we had previously with Blue Matteo). So, we included ‘Eriza’ - Matt’s last name. What most people don’t know is that ‘Eriza Verde’ (verde meaning Green in Spanish) is actually a play on words for a nickname we gave Matt. After work, when we would go out for drinks, Matt would always seem to vanish without a ‘proper’ goodbye. We started calling him Eriza Derci which is a play on arrivederci, Italian for “see you later.” So arrivederci > Eriza Derci > Eriza Verde. It’s a bit of stretch, but we love the name.