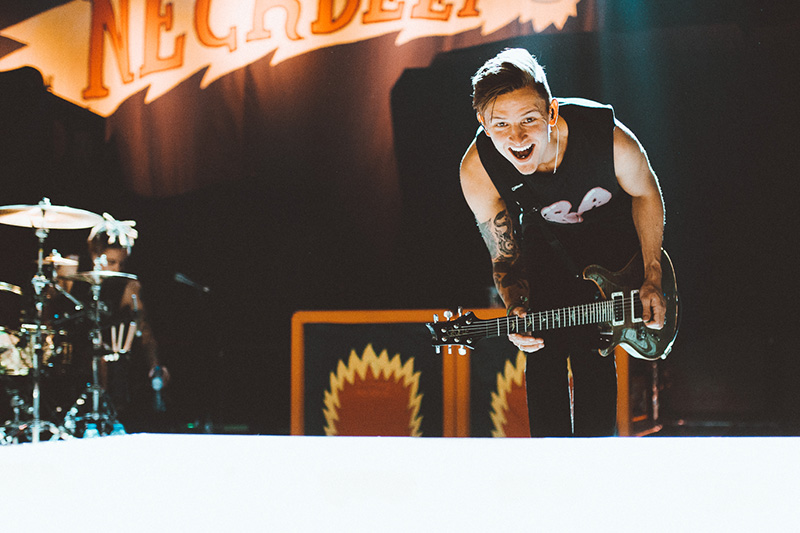 The Vans Warped Tour presented by Journeys is the nation's largest traveling music festival and has been connecting fans with their favorite bands since 1995! For the musicians on the tour, Warped is one of the most aggressive touring schedules one can experience, typically spanning 41 cities in 50 days. We took the time to chat with a few artists playing PRS on this year's tour, and learn about their favorite parts of Warped, the gear they're using, and more!

How many Warped Tours have you played? What are you most excited for this year?

Miguel Cardona: This is my very first one! El primero! I'm most excited for the east coast part of the tour, this tour has been a dream of mine for a very long time, so seeing all of my friends faces in familiar warped tour venues is gonna be really emotional for me.

Pat Dimitri: This is my third Warped Tour in 4 years - which is especially odd because I studied very different kinds of music in college and never went to Warped as a teenager. I'm excited to be supporting two artists on main stage this year (Andy Black and Watsky) and all the fun and challenges associated with playing for VASTLY different acts.

Mason Gainer: This year will be my second Warped and I'm most excited for the catering! I'm also really excited to meet new bands and make new friends.

Sam Bowden: This is technically my first ever Warped tour. Last year we did play one show in Indiana so I got a taste for it, but this is the first full experience. I'm excited for the whole thing to be honest. I've never done Warped and always wanted to, so every day is something new for me.

What’s the most challenging thing about playing on the Warped Tour?

Miguel Cardona: It's day 2 so the hardest part of Warped is how long the catering line is. The food is amazing though thanks to the crew.

Pat Dimitri: The elements can be brutal, it can be 115 degrees in AZ one day and pouring rain in Tampa the next day and you still have to get to the stage and play a show.. and your only sanctuary is usually a crowded bus.

Mason Gainer: I think the most challenging thing about Warped Tour is getting people to watch your set when there are so many other amazing bands playing around the same time.

Sam Bowden: The heat by far. One day we played New Mexico and the altitude was crazy high and the temp was around 46 degrees (Celsius). 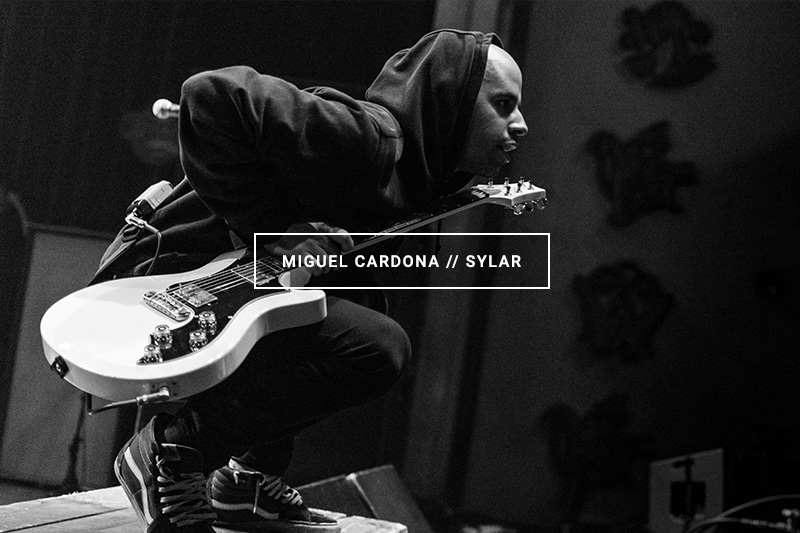 What do you like to do with your free time while on the road?

Miguel Cardona: I play a lot of 2k17 and a lot of Madden.

Pat Dimitri: Sleep!! Just kidding.. kind of. On Warped especially, people are generally exhausted so naps for me at least are essential. Other than that I like to check out friends bands, read books, go to the BBQ's and generally socialize and meet other people in the music industry.

Mason Gainer: Any free time I get while on the road I like to spend writing / recording music.

Sam Bowden: In free time I try keep fit by working out or running usually. So far on this tour we've been playing football (soccer not hand ball) most nights which has been super fun. Found a bunch of people that are into it so we have a little meet up each night. 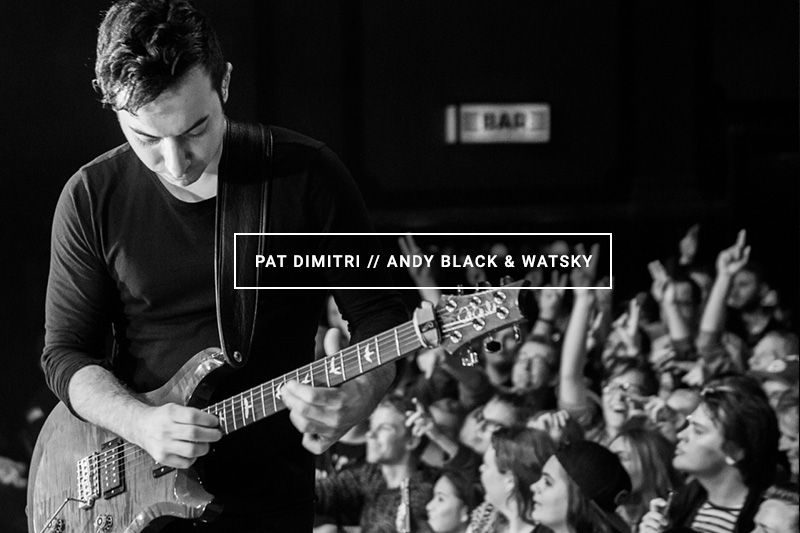 Do you have any pre-show rituals or warm-up techniques?

Miguel Cardona: Shots of Jamison with my band and then the classic Ray Lewis hype up.

Pat Dimitri: I warm up for about 30 minutes before every set - I do have some specific exercises that I like to do but overall it's just important that I have my hands on the instrument that day. Other than that, whomever I'm playing for might say a few words and have us all put our hands in.

Mason Gainer: Before shows I just like to play guitar for at least 30 minutes before going on stage.

Sam Bowden: I try play a few warm up scales that tend to help with just getting movement started. If I haven't played all day it's good to run through some stuff 30 min before the set. 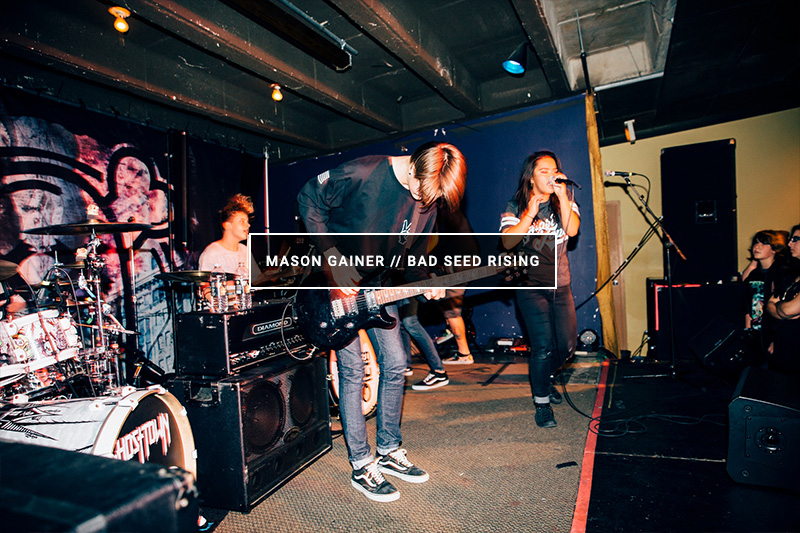 What PRS gear are you playing this year, why do you like using PRS on tour?

Miguel Cardona: I am playing the S2 Singlecut and the Mira. I like using PRS cuz they're tight...duh

Pat Dimitri: My main guitar on this tour is a S2 Custom 22 backed up by an S2 Mira.. Practically speaking, the PRS' look good, are light, have great humbucking and single coil tones and better action than I've gotten on any other guitar.. so because of their ease of playability and versatility I've almost never used a non PRS guitar in 5 years of professional touring.

Mason Gainer: I only play through a PRS Archon on tour. I usually play a custom 24, but this tour I brought out my Vela for the first time and I'm loving it.

Sam Bowden: I'm playing 2 PRS guitars all summer. I have a Custom 24 in grey/black that has been my weapon of choice for a while. However the start of this tour I got a custom-made Custom 24. I had the luxury of choosing all specifications with it so I went ahead and got it in baby pink. Had “ND” for Neck Deep punched in on the 12 fret in pink as well. I love playing these guitars, I've been through so many since I started playing guitar and nothing has ever felt quite like a PRS. They're just really well made guitars that sound great, hold tuning great and tour great. 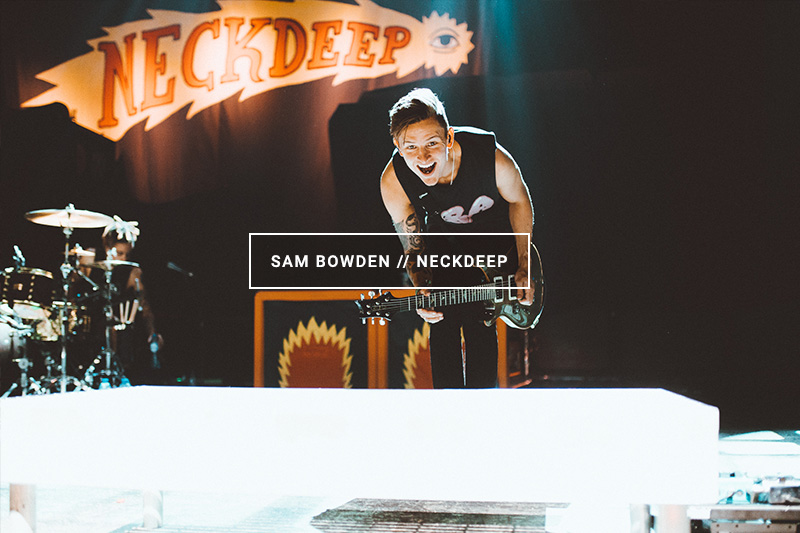 What advice do you have for guitarists just starting out?

Pat Dimitri: I guess... be patient! If you practice diligently and intelligently you'll get to where you want to go, but nobody gets where they want to go as fast as they want, so you have to be willing to be frustrated. At the end of the day, everybody is terrible when they first pick up an instrument - even those who are more naturally gifted than others (and I certainly was NOT naturally gifted). So as long as you don't put the instrument down, you put yourself in a position to succeed.

Mason Gainer: If you're just starting to play guitar my only advice would be to practice every chance you get, learn every single one of your favorite songs, write your own songs, and just have fun with it. That's what I think music is all about.

Sam Bowden: Don't pass on learning some theory. When it comes to writing songs, knowing a decent amount of scales or theory behind extended chords etc will go a long way. I never went too deep into it, but that's something I regret and advise. Also don't be afraid to write music. Even if it's your first go and you hate it and think it sucks, keep going. You only get better the more you put into it.