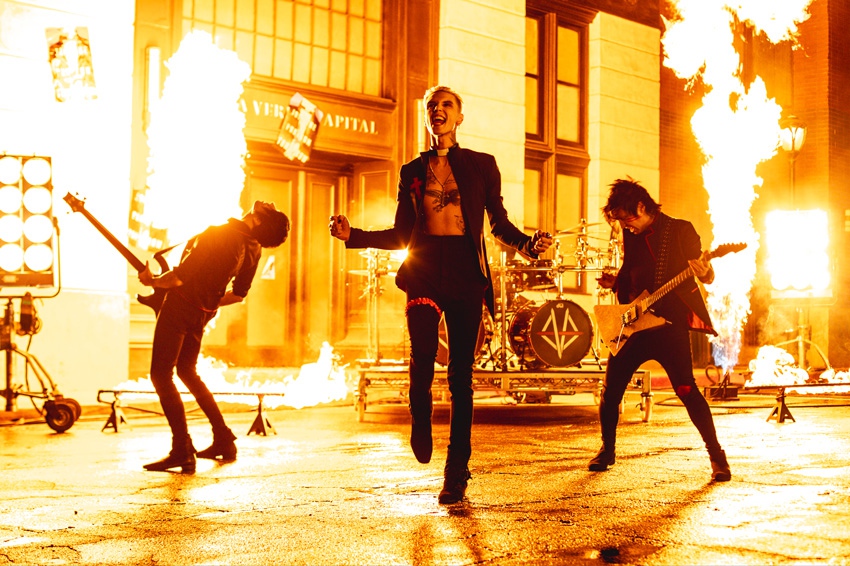 Black Veil Brides have just dropped a new video for “Scarlet Cross,” the first single from their forthcoming album The Phantom Tomorrow. This will be the band’s sixth original studio album and the first with their new bassist, long-time PRS endorsee Lonny Eagleton. Check out the music video below to see Lonny holding down the low end with his trusty SE Kingfisher bass.

You can also check out Lonny’s personal YouTube channel for gear reviews, artist interviews, song playthroughs and more. We recently caught up with Lonny and he filled us in on his band and his basses.

PRS: It has already been a year since you officially joined Black Veil Brides as their new bassist. What have been your favorite experiences with the band so far?

LE: Yes, time files! I’m very fortunate to have joined a band with such an impressive resume of work behind them, yet who are still hungry as ever to prove their worth and share their vision. Over the past 12 months we have released quite a bit of new music, performed a sold out concert in Mexico City, pulled off a successful livestream broadcast, appeared on magazine covers, and have just released the first single “Scarlet Cross” from our forthcoming album The Phantom Tomorrow.

PRS: You have been very faithful to the SE Kingfisher, what are the features that make you prefer it over the Kestrel?

LE: Both the Kingfisher and Kestrel are fantastic instruments, I currently own 3 Kingfishers and 1 Kestrel. With Black Veil Brides I tend to favor the former because I feel they lend better to a rounded warmer bass sound, great for drop tunings and heavy riffs, which are a staple in this band. The Kestrel, on the other hand, comes in handy if I’m playing slap, or anything melodic. My role with Black Veil Brides though is to lay down the foundation with a solid bass tone that hits you in the chest. Our two guitarists in the band (Jake Pitts and Jinxx) often play dual harmonized leads, so I try my best to not step on their toes. The Kingfisher does a great job of keeping things full without crowding their space in the sonic spectrum.

PRS: Speaking of the Kingfisher, we sent you one with a custom satin black finish. Has that been your primary bass for writing and recording with Black Veil Brides?

LE: It has. I really do love that bass. And yes, in fact you guys have been kind enough to provide me with two custom paint jobs so far, one in satin black and the other in gloss black. While working with Black Veil Brides we tend to rotate between Drop C# and Drop C tunings, so I keep one in each. The satin black Kingfisher can be seen in the band’s new music video for “Scarlet Cross,” while the gloss black can be seen in my playthrough video of the same song on my personal YouTube channel.

PRS: The video for Black Veil Brides latest single “Scarlet Cross” just surpassed a million views in its first week. Are we going to get to preview any additional new tracks before The Phantom Tomorrow drops?

LE: Yeah the song has received a great response so far from our fans and from the metal community. It’s amazing to see all the covers on YouTube, fans getting the lyrics tattooed, replicating our face paint designs, etc. We’re all so appreciative and excited with the first push from this upcoming album. Presently we’re working on finishing up the rest of the songs, to be released next year. I image there will be one or two more singles issued before the full album drops.

PRS: Looking forward towards the future, Black Veil Brides have got some dates lined up throughout Australia & Europe in the second half of 2021. Are there plans to tour North America if venue restrictions have lifted?

LE: Our original plan for 2020 was to tour the entire year all over the globe. Once the coronavirus pandemic lifts we plan to carry through with those plans. Like most every band these days, we’re ready to get back on that tour bus the moment we receive the green light, but given the state of the world right now it’s difficult to say when that can happen. In the meantime we’re very excited to be working in the studio and making music videos, but believe me when I tell you we’re all itching to get out and play some live shows in front of an audience. Fingers crossed that can happen sooner rather than later!