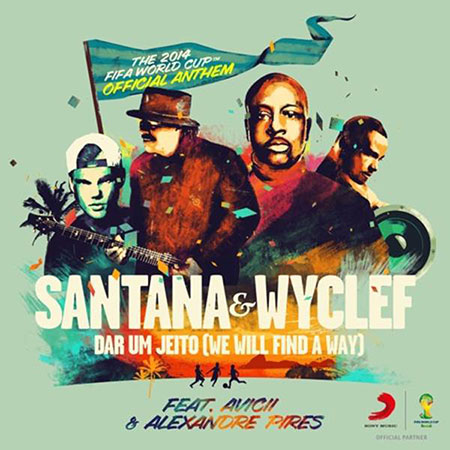 On July 13th, the FIFA World Cup 2014 will conclude, ending a month of football extravaganza featuring the best teams from around the globe. Prior to the final match between Germany and Argentina, the closing ceremony will take place at the legendary Maracana Stadium in Rio de Janeiro. Earlier this year, FIFA and Sony Music Entertainment announced the Official Anthem of the 2014 FIFA World CupTM in Brazil entitled “Dar um Jeito (We Will Find A Way),” featuring a global superstar line-up including music legends Carlos Santana, Wyclef, Avicii and Alexandre Pires. The Anthem was released late April and was produced by 2-time Grammy-nominated Ash Pournouri (PRMD Music), Carl Falk, Rami Yacoub and Wyclef Jean and recorded at PRMD Studios in Stockholm. “Dar um Jeito (We Will Find A Way)” will be performed at the 2014 FIFA World CupTM Closing Ceremony on July 13 at the legendary Maracana Stadium in Rio de Janeiro. “Dar um Jeito (We Will Find A Way)” is the brainchild of Arnon Woolfson and Pournouri who began work on the track with Wyclef, Yacoub and Falk earlier this year. Pournouri says, “In Portuguese Dar Um Jeito means to find a way around obstacles and impossibilities. With this track, we wanted to send a message of optimism and opportunity with the music and the words.” Once the track idea was created, Santana, Pires and Avicii each added their own sound to the recording. An international cast of some of the greatest musicians in the world went into the recording; continues Pournouri, “We wanted to create the biggest track in the world for the biggest event in the world.” Carlos Santana says of the project, “It is an honor to take part in the 2014 FIFA World Cup and have “Dar um Jeito (We Will Find A Way”) selected as the Anthem. Along with my brothers, Wyclef, Avicii and Alexandre Pires, we look forward to performing the song in Rio de Janeiro in July and sharing this message of light and hope on the FIFA World Cup stage.” PRS Guitars would like to congratulate Carlos Santana on yet another great accomplishment and are honored to have him represent our guitars at the World Cup closing ceremony.