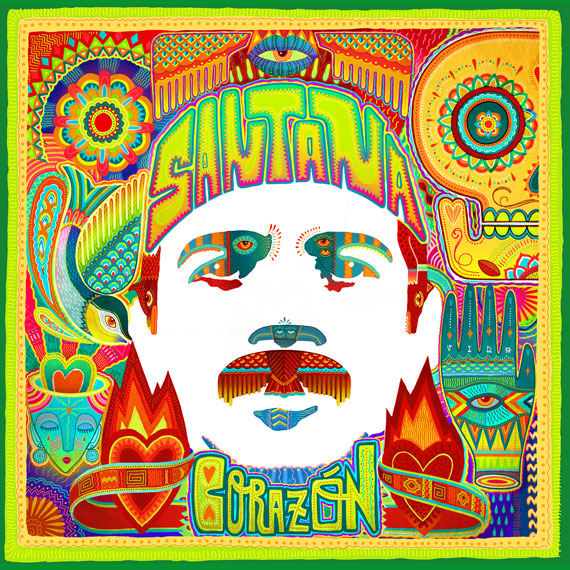 Guitar legend Carlos Santana is going back to his roots and allowing fans to have a peek at his “Corazón” (“Heart”). The Mexican-born icon will be releasing his first, ever, Latin music album on May 6, the star announced Thursday via Facebook. In the post, Santana also unveiled the cover art for the upcoming record, which will feature collaborations with some of the biggest Latino stars in the world. Last week, Santana’s team published the official cover art for “Corazón.” According to the artist’s website, the concept and design is by Madrid-based art collective Boa Mistura. The 66-year-old legend achieved mainstream success with his Grammy-winning album “Supernatural” in 1999. The record featured several successful collaborations, including “Smooth” with Rob Thomas and “Maria Maria” with Product G&B. “Corazón” promises to also be a collaborative hit. The album, produced by Lester Mendez, already counts with the participation of Juanes, Romeo Santos, Pitbull, Gloria Estefan, Diego Torres, Miguel, Lila Downs, ChocQuibTown, Fabulosos Cadillacs, Ziggy Marley, Niña Pastori, Samuel Rosa of Skank, Cindy Blackman Santana, Soledad, Wayne Shorter and more according to a statement on the artist's website. "All the artists, men and women, who have taken part bring their own light, their talent, their spirit, they want to work with me... I've surrounded myself with artists who see the invisible and do the impossible," Santana told Efe late last year. On Monday, he also announced the first dates of the “Corazón Tour,” to begin in Atlantic City on June 13th. “La Flaca” by Jarabe de Palo, sung by Colombian rockstar Juanes, is the first single off the upcoming album.
*Original Article courtesy of Huffington Post. “Carlos Santana Unveils His 'Corazon' Album Cover, Collaborations.” Huffington Post. 3 March 2014.