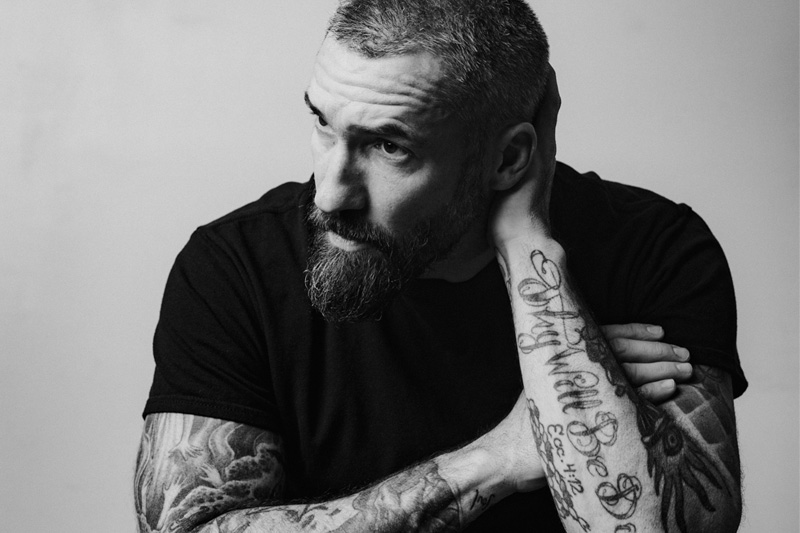 After two-plus decades, twenty-something albums, and thousands of shows, Clint Lowery does something he’s never actually done in his storied career as co-founder, guitarist, vocalist, and songwriter of GRAMMY® Award-nominated platinum juggernaut Sevendust and a host of other projects. On January 31st, the musician delivers his full-length solo debut, God Bless The Renegades [Rise Records]. The ten-track album hinges on his signature airtight riffing, eloquent songcraft, soulful vocals, cinematic soundscapes, and boundary-breaking spirit as it introduces a sharp style of his own.

“In the past ten years, there were a few times where I wanted to do a solo record and there were other projects even in a similar realm,” he says. “In my career, I always hoped to eventually have the connection of fans singing the words I wrote back to me as I sang with them. I felt like I owed it to myself. Where I am creatively, it was something I needed to do. The Sevendust guys were super supportive, and it’s made me enjoy our band even more. Still, I desperately needed to prove myself and see if I could do it. Putting this under my name was a big decision. There’s an empowerment to it; I’m glad I did, because it’s me.”

Listen to the title track, "God Bless The Renegades" below:

Throughout 2019, Lowery pieced together ideas for God Bless The Renegades. Opening up the sonic palette, he drew on a wide range of influences, spanning perennial favorites such as Nine Inch Nails and Queens of the Stone Age as well as Tears For Fears, Peter Gabriel, The Police, and The Stranger Things Soundtrack. Enlisting the talents of producer Michael “Elvis” Baskette [Slash, Alter Bridge] behind the board, he spent three weeks at Studio Barbarosa in Florida. Lowery personally handled vocals and guitars with Wolfgang Van Halen contributing drums and bass. At the same time, “Elvis” incorporated analog synths, keyboards, and organ, adding yet another dimension to the sound.

“Elvis was aware of this other side I hoped to explore,” Lowery goes on. “He’s a mastermind sonically. He challenged me on a lot of vocals and pulled the rock record out of me. It had to represent me as an individual and express what I liked as a musician. I’m still the kid who listens to the nuances and ambient vibes of songs. We brought in this ear candy. The objective was to show people who I am as an artist.”

The first single “Kings” does so. An echo of stark vocals gives way to a seesawing guitar groove punctuated by a pummeling stomp and synth swells. Verses build toward the hard-hitting hook, “Dying at the bottom, but we live like kings,” before a hummable wah-drenched lead.

“It’s the most basic form of where I wanted to go creatively,” he goes on. “There’s a message to the chorus. I’ve lived this intense life. There’s been a lot of decadence, but I’ve survived it. I don’t regret anything. I’m glad I survived. ‘Kings’ sums up the vibe of the record.”

Watch the music video for "Kings" below:

The follow-up “Alive” pairs a danceable beat with heavy distortion as it offers another candid confession and a wise warning. “Back in the day, Sevendust was a very toxic landscape,” he admits. “The song says, ‘Be careful if you come out here and do this tour. If you live this life on the road, you’ll be lucky to get out of here alive’.”

The opener and title track steamrolls forward on a thick guitar chug as the chorus pays homage to Renegades everywhere.

“I get caught up in social media just like everyone else,” he elaborates. “Like a moth to a flame, we all get sucked into the narcissistic culture of looking at each other’s lives and judging them. I was annoyed by it. I love when people step out of it and think for themselves. God bless anyone who can do something on their own. The theme carries through a lot of the lyrics on the record.”

Elsewhere, neon synths course through a trudging beat on “Here” as the emotional and entrancing “She’s Free” assures his daughter, “She’s free to do whatever she wants, but I’ll be there right behind her forever.” Everything culminates on “Do We Fear God.” Bright instrumentation leads into an enlightened and engaging chant.

“It’s the most positive song I’ve ever done,” he smiles. “I do believe in a higher power. It’s about the intent to become a better person and have a relationship with God—whatever your god is.”

As a whole, the album represents the apex of an unbelievable journey for Lowery. As one of the architects of the turn-of-the-century’s hard rock revolution, he stands out as a prolific powerhouse whose discography includes albums by Sevendust as well as Dark New Day, Call Me No One, and Hello Demons Meet Skeletons. Not to mention, everyone from Korn to Seether has sought him out on tour as a guitarist. He also remains an accomplished songwriter with credits for Godsmack, Stryper, and many others.

Now, Lowery allows listeners to get to know him like never before on God Bless The Renegades.

“I’d love for people to walk away surprised,” he leaves off. “Maybe they think, ‘Oh man, I didn’t realize he was capable of that’. I hope they recognize a style, and I establish a sound under my name. Just like every other record, I also hope they escape into the music, love the energy of it, and get out of their heads. This record might even be a tool for positivity. If you can see someone who has lost every single thing in his life, play this, write, and be able to do it, it could be an inspiration. I want everyone to know I’m grateful just to do this record.” – Rick Florino, October 2019

Listen to the album here.