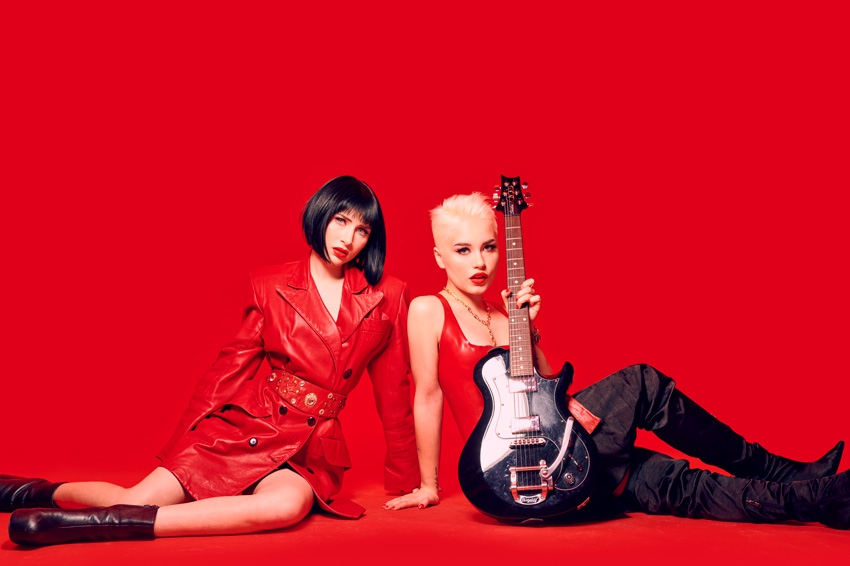 Toronto based PRS artists, The Command Sisters, have just released the second single from their forthcoming debut EP with Universal Music Canada. The band, comprised of multi-instrumentalist sisters Sarah and Charlotte Command is gaining traction in the U.S. as well as Canada. While both sisters are talented songwriters and guitarists, it is Sarah who is most often seen holding down the duo’s electric guitar duties.

Their newest video and single "I Like It" drops today (July 15th), give it a listen below:

Q&A WITH THE COMMAND SISTERS

PRS: As of today, the first two singles from your much-anticipated EP have been released, “I Can Do What I Want To” & “I Like It”. When can we expect to hear the EP in its entirety?

Charlotte: It’s been so incredible releasing our first singles, “I Like It” and “I Can Do What I Want To”! They are an excellent first taste of what’s to come. We cannot announce exactly when the rest of the EP will be out just yet, but people can follow our socials for updates!

PRS: You took matters into your own hands when it came time to shoot the video for "I Can Do What I Want To" - filming the entire thing with an iPhone during quarantine. That is impressive, how long did that process take from start to finish? Can you tell us a little about this?

Charlotte: Filming the video for "I Can Do What I Want To" was a unique challenge and experience for us, as it was something we had never done before. In total, it really didn’t take THAT long to film, which was surprising! We spent one day doing a bunch of different shots, sent it to our team to get their opinion, and then spent one more day playing with our ring light and other effects on our phones. We had to use our limited resources and environment in our tiny condo to come up with something cool, verses having a huge camera crew and everything. We even used red sunglasses to make our camera look all “red”, haha. Surprise.. our label LOVED the video!! We were so happy with how it turned out, since we didn’t know what to expect going into it.

PRS: We often see you tearing it up on your customized SE Custom 24 with the swirl graphics. What inspired The Command Sister’s trademark red, black & white aesthetic?

Sarah: This is truly our dream guitar. When designing this guitar, we wanted it to scream “Command Sisters” from across the room at a concert venue. The red in our color scheme represents passion, desire, and boldness. The black and white represents my sister and I, since we are very much yin and yang.

PRS: The Command Sisters have a very eclectic sound, how do you approach songwriting as a guitarist?

Charlotte: Being a guitarist is SO, SO important as a songwriter, and I truly believe that I wouldn’t be where I am as a writer today without my background in guitar. The guitar transcends so many genres and different sounds, and there’s just so much you can do with it from a writing perspective. Being a guitarist helps me get a good strong base when I’m starting a song, OR, if I’m starting on piano, moving it to guitar afterwards always gives me a fresh new sound. My favorite thing is trying a song on different instruments to see where it best fits, and see what instrument can embellish the sound. There’s just so much you can create with a guitar.

PRS: You’ve been actively involved with the Women’s International Music Network for several years. In 2017, you were presented with a “surprise” She Rocks Next Generation Award. What an honor!! Tell us a little bit about that night and what that award means to you.

Sarah: I’ll never forget that my first guitar teacher told me that “women don’t play lead guitar.” That day on I became very passionate about promoting female musicians and spreading awareness about sexism in the music industry. Receiving an award the same night as some of my female idols (Shirley Manson of Garbage, Chaka Kahn, Lita Ford) was the biggest honor. I have worked and volunteered with The Women’s International Music Network for a few years now. The Founder (Laura B Whitmore) has opened so many doors for women in music. I’m forever grateful that I was one of them. I hope that my award inspired one young girl in the audience to continue playing guitar or pursuing music, no matter what discouragement she may encounter along her journey.

PRS: Have you faced any challenges or barriers being women in the music industry?

Charlotte: We have definitely faced challenges as women in the industry, and we’ve had to find ways to face them and come back stronger. For Sarah, simply being a female guitarist who solos is interesting, since it seems to be a pretty male dominated world. People often criticize and scrutinize your “image” and your looks more when you are a woman, and your age as well. We once had a guy tell us once you’re 25 you can’t sing pop music anymore, lol, which is very untrue. Our tough experiences are what makes us so passionate about speaking out against sexism in the industry, though, and advocating for girls and women in music.

PRS: What are you most looking forward to after the lockdowns when live music comes back?

Charlotte: After lockdown is over, I’m definitely most looking forwards to playing shows again!! And getting to watch my friends perform at all my fave venues in Toronto, like the Horseshoe Tavern. Oh, and TRAVELLING. I miss travelling SO much and want to go to Disneyland after all this is over, LOL.