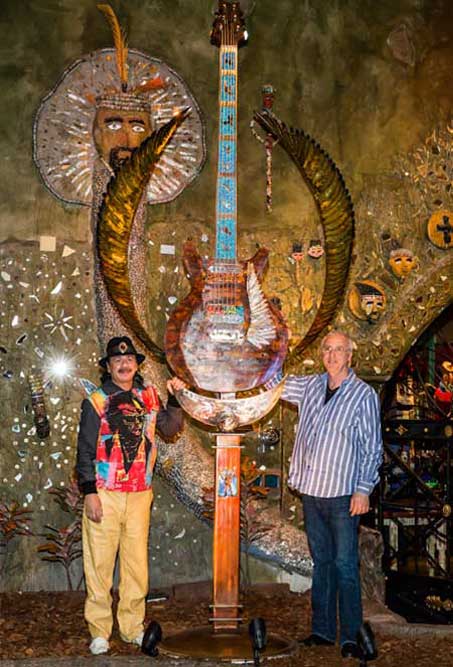 A 13-foot steel, glass, and bronze sculpture of a PRS Santana signature guitar was unveiled in front of the House of Blues Las Vegas in Mandalay Bay Resort & Casino this week in honor of the House of Blues first resident and long-time PRS artist, Carlos Santana. The statue was created by premiere American artist and innovator Dale Evers. According to the Evers, the immense sculpture, which is entitled “Wings of Legend,” represents the tens of millions of guitars that have become an intrinsic part of American pop-culture and pays homage to the artistry of Santana and his relationship with PRS guitars. “The sculpture truly embodies the magnificence that is Carlos Santana,” says Evers. “It is an understatement to say I am honored and greatly appreciative for this grand moment in my life.” Evers’s unmistakable signature is characterized by his masterful fusing of glass, bronze, and steel into creative realities. His numerous commissions have led to permanent installations throughout the US and Mexico. The unveiling ceremony included presentations by House of Blues CEO Ron Bension, Artist Dale Evers, Guitar legend Carlos Santana, and PRS Guitars working founder Paul Reed Smith. As part of the presentation, Paul Reed Smith donated six PRS SE guitars in Carlos’ name, to the International House of Blues Foundation (www.ihobf.org) in support of their Action for the Arts music program (www.actionforthearts.org) which supports youth music and arts programs. For more than forty years and as many albums later, Carlos Santana has sold more than 90 million records and reached more than 100 million fans at concerts worldwide. To date, Santana has won ten Grammy® Awards, including a record-tying nine for a single project, 1999’s Supernatural (including Album of the Year and Record of the Year for “Smooth”). In 1998, the group was ushered into the Rock and Roll Hall of Fame, whose web page induction notes state, “Guitarist Carlos Santana is one of rock’s true virtuosos and guiding lights.”
← Back To Blog