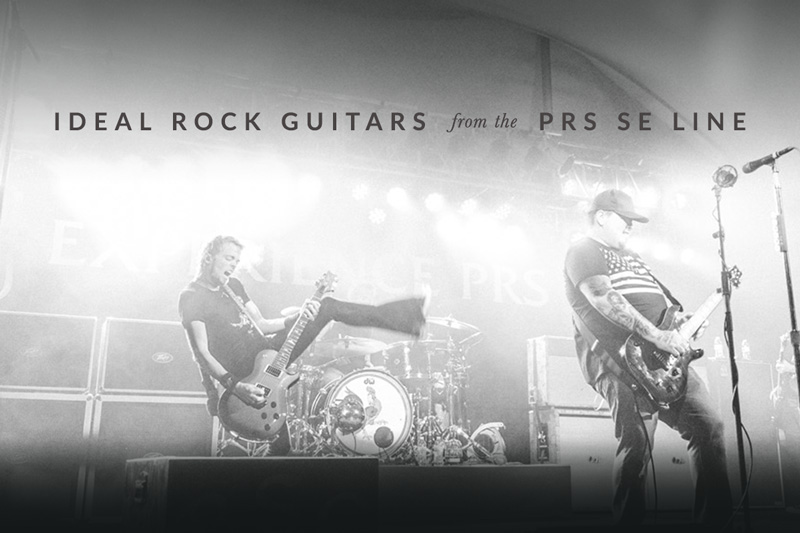 In this blog post, we hand the reins over to Bobby Kittleberger, the founder and editor of Guitar Chalk and a contributing editor at Guitar World. Below, Bobby puts his years of guitar-related experience and expertise to work to help you find the best PRS to unleash your rock. Check it out!

The first “serious” guitar I ever purchased was one of the PRS SE models, an old Santana design back when I was 15 years old, fresh off my learner’s permit.

At the time of writing this I’m 29. I still own and use that guitar.

Moreover, it sounds great. You can see it in action here.

All that I’ve done to keep it going is add a pair of Seymour Duncan pickups and do a little bit of rewiring. For the price, I never would have expected that guitar to last as long as it has, or to sound and play as good as it still does.

The value I got with that purchase can’t be overstated.

And that’s really all you can ask out of an economy line, or any group of cheap electric guitars. While you want the “cheap” price tag, you don’t really want a cheap instrument.

That’s where PRS has done such a great job with their SE line.

These guitars feel far more expensive than they are.

In this write-up, I want to highlight the PRS SE line and, more specifically, models that are most ideal for the rock and metal genres.

At the time of writing this, there are 20 total guitars in the SE production line (two are basses), so we’ll look at four that are uniquely fitted for the hard rockers among us.

The Versatility of PRS Guitars

It’s important to mention that PRS guitars are known for being stylistically versatile, capable of handling nearly any kind of music that accommodates an electric guitar.

The SE line is no exception. 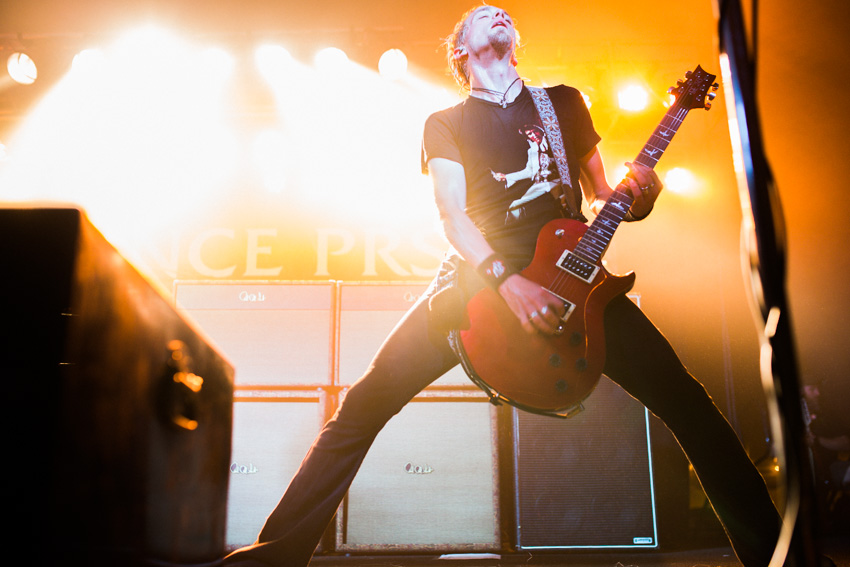 Thus, it stands to reason that any of these guitars could, and do, handle a wide variety of musical styles and subgenres, from the light blues of John Mayer all the way to the heavy metal riffing of Periphery’s Mark Holcomb (more on him later).

Still, we’re looking for “ideal fits” for rock, requiring that we be a little more specific about features and tone.

Just keep in mind, I’m making a distinction between “ideal” and “entirely capable.”

All the PRS guitars are entirely capable of handling the rock style, though some are more ideally equipped than others.

Let’s dig those out and take a closer look.

The 277 Baritone model is a continuation of PRS's baritone offerings.

The 277 is built to handle very low tunings and thicker strings with a longer neck, measuring 27.7 inches (thus the “277” name tag). The longer neck allows for each fret to be a little bit larger, which is more accommodating to the heavy detuning demanded of baritone players.. 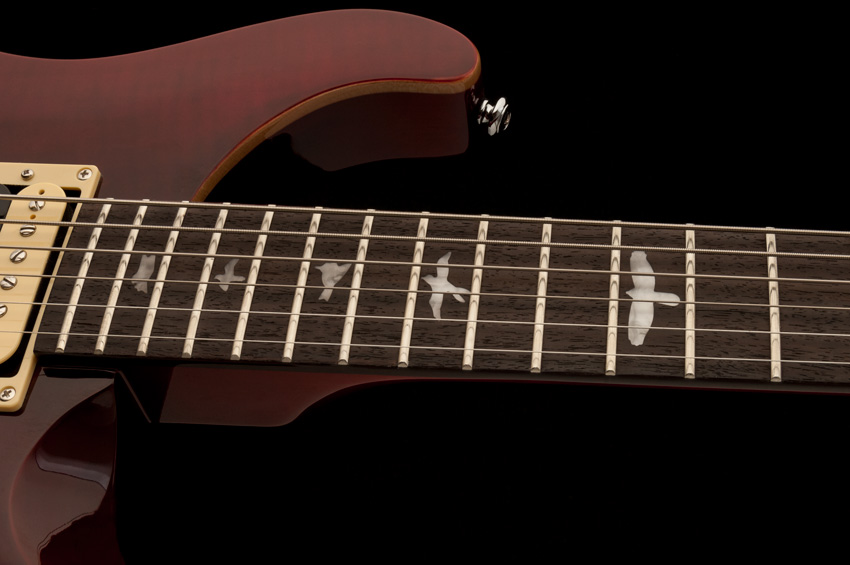 The bridge is a sleek string-thru design that feels completely solid and is ideal for anchoring the larger strings.

Your tonewood is a combination of a Maple top with a Mahogany back, giving you a nice tonal mixture of tight lows (which are great for chunky power riffs) and resonant high notes with plenty of sustain at both extremes.

This wood combination is popular among luthiers (and used in many PRS guitars) since it does such a good job of maintaining a nice balance of your EQ between both the lower and higher notes. 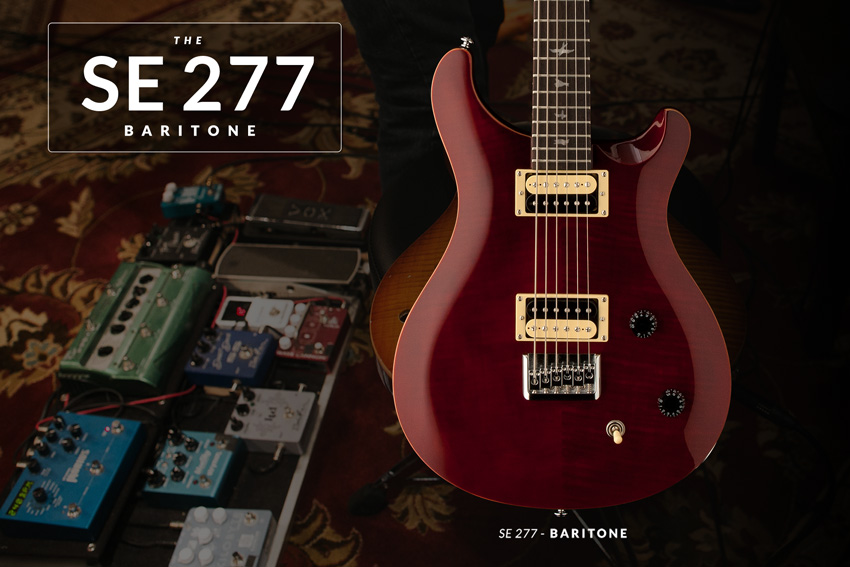 The resonance you get from the Maple and Mahogany mixture is pushed by a set of Tone Furnace Pickups, which are a fairly new offering from PRS that run a little hotter than the pickups traditionally used in PRS SE models.

This gives the 277 a nice growl and aggressive appeal, perfect for all flavors of rock, even lending itself to the heavier metal side of the fence, especially with the capability of lower tunings.

However, the 277’s strongest context is, predictably, heavily overdriven distortion coupled with low hanging power chords. Anyone who dabbles in that style will absolutely love the 277.

Body Carving and Other Stylistic Touches

While the SE’s don’t have the same distinct carved top that you get from the more expensive PRS models, the 277 does have a noticeable contour to its perimeter.

The contour gives the top of the guitar some definition which pairs nicely with the easily recognized “bird” inlays on the Maple fretboard.

For anyone in the rock or metal disciplines, this is an absolute beast of a guitar, ideal for those styles in nearly every aspect. If you dabble in any kind of heavy music and want something that can better handle the lower tunings, the 277 makes a strong case.

The Mark Holcomb signature might be the best overall rock outfit in the entire SE lineup.

You get a slightly beveled Maple top and Mahogany back, echoing the tonewood arrangement of the 277 and, once again, providing plenty of sustain at both the low and high ends of your fretboard.

Coil-tapping is including via a push/pull tone knob to go along with a three-way pickup selector, rounding out an agreeable (if not expected) list of core features.

Where the Mark Holcomb signature really stands out is the pickup selection.

Holcomb’s signature Seymour Duncan pickups, “Alpha” for at the neck and “Omega” at the bridge, are both included in this model.

These are the same pickups that PRS runs through Holcomb’s premium signature model, which was only available for a brief ordering window of a few months back in 2015. 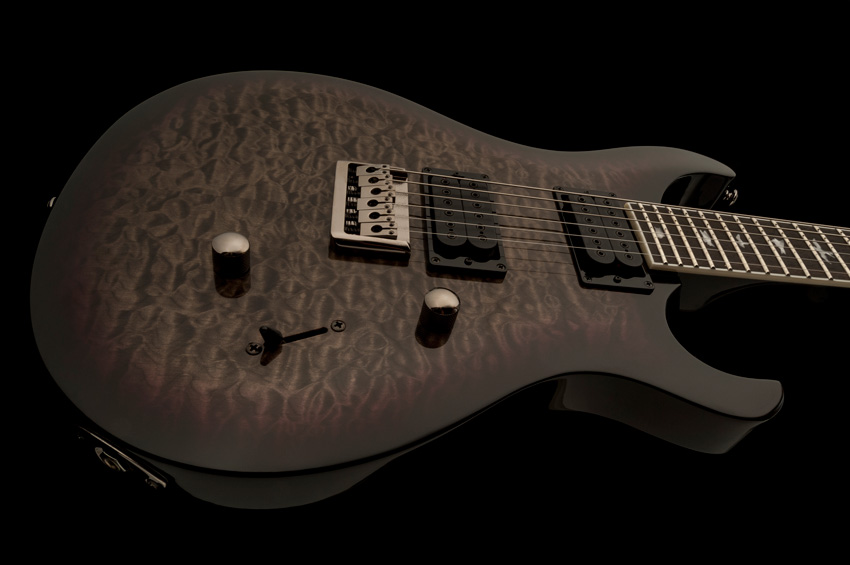 ^ A closer look at the the Seymour Duncan Alpha and Omega pickups.

Including these pickups is a huge plus for buyers in the rock genre, for a couple of reasons:

First: You’re getting humbuckers from the single, most renowned and respected pickup designers in the country. Regardless of your stylistic leaning, this is a significant value indicator.

Second: Holcomb’s pickups are voiced for heavy rock and the aggressive style of Periphery’s guitar playing, which means you’ve got an SE model that is uniquely qualified to handle modern power riffs. 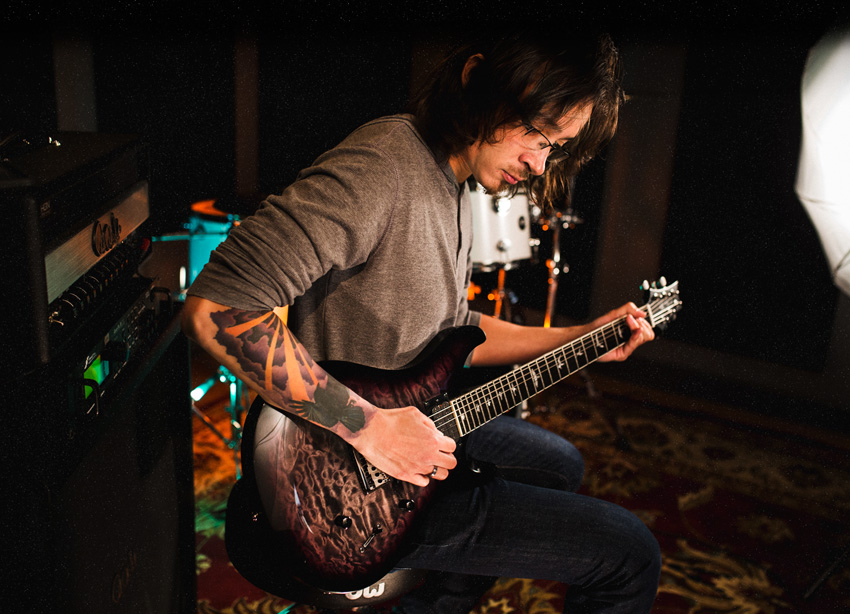 Overall, nothing about this guitar is gimmicky or “cheap.”

Though it’s a bit of a “niche interest” within the guitar playing community, there’s little that says “modern rock guitar” like a licensed Floyd Rose tremolo system.

Particularly for lead guitar players, and those who do a lot of heavy tremolo work, the “Floyd” version of the SE Custom 24 should be distinctly appealing. If trem bars aren’t your thing, there are a couple “Floyd perks” that might be worth considering.

Even those who would consider themselves rhythm players, will benefit.

Advantages of the Floyd Rose for Rhythm Players

First, the Floyd bridge just looks incredibly cool on a PRS guitar. If for nothing aside from rock aesthetic benefit, the Floyd Rose is a real showpiece. 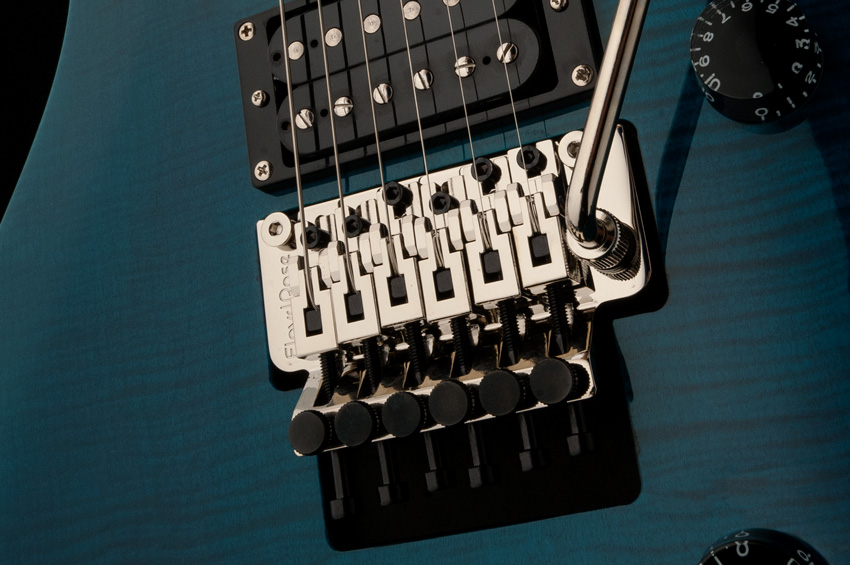 ^ A close up of the Floyd Rose bridge and tuners.

Second, the locking tuner portion of a Floyd Rose system means that your strings are almost impossible to knock out of tune. You’ll also be able to tune the guitar both from the headstock and from the bridge, via the circular fine-tuning knobs.

This allows you to tune as you normally would, lock it in place, then make small adjustments via the bridge. 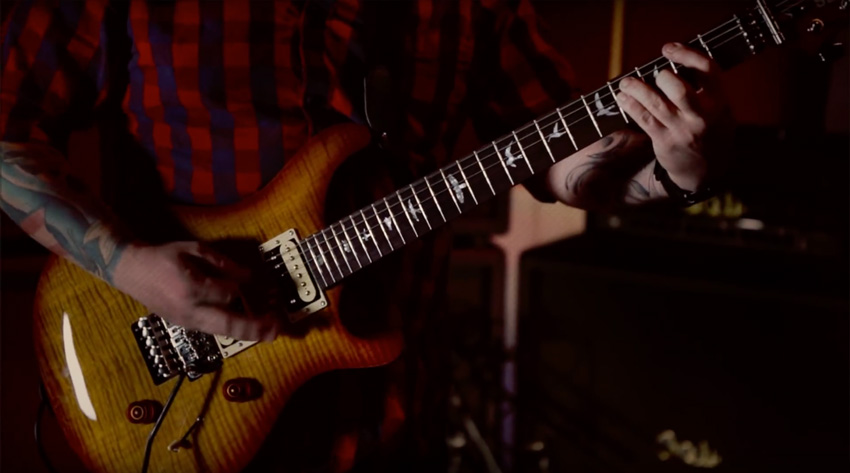 For what it’s worth:

I find that, even as someone who leans more to the rhythm side of guitar, I absolutely love having, and using, a Floyd Rose system.

Other Perks and Features

Once again, Maple and Mahogany make up your tonewood combination while PRS adds a Rosewood fretboard to the mix. The “24” stands for 24 frets, giving you some additional space compared to the more conventional 22 frets.

The PRS pickups on the SE Custom 24 sound exceptionally good.

The base of the Custom 24 is an excellent rock guitar, as we’ve seen with the “Floyd” version.

PRS offers the same core guitar in a 7-string version which gets a mention on this list for similar reason that we sighted for the 277 Baritone.

Seven string guitars are a staple of the metal and rock genre, able to handle lower tunings and thicker string gauges.

The SE 7-string gives you the extended 24 frets, though still runs a 25” scale length. 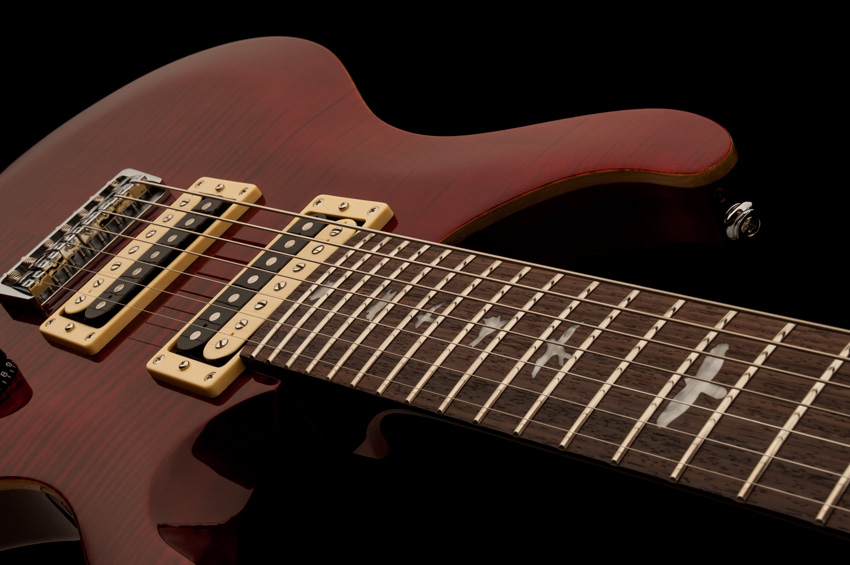 Difference Between Baritone and 7-String Guitars

All baritone guitars are characterized by slightly larger frets, as we saw with the 277. However, not all 7-string guitars boast the same increased fret size.

A 7-string guitar is still considered a regular guitar, just with the thicker string added above the low E. That thicker string is usually tuned to B, which means you can tune as low as drop A or A♭ and still maintain tonal integrity.

In other words, your strings won’t feel like rubber bands.

Both the 277 and Custom 24 7-String are great for rock because they allow you to get deeper power chords and, in both cases, tune down, to varying extents.

Which one you go with is certainly a matter of preference and situation, where heavy de-tuning fans will opt for the baritone and those who want a simpler, low-tuned guitar will be better off with the 7-string.

The 7-string includes all of the same aesthetic benefits as the Custom 24 with a slightly carved Maple top, bird inlays and the Zebra PRS bass and treble pickups.

Exploring the Other PRS Models

Once you get out of the SE lines, PRS still offers a number of different “tiers” that allow you to go up incrementally in pricing.

Thus, you don’t immediately have to jump to the $6000 Private Stock models.

Here are some of the other lines you might consider exploring to find a good rock guitar:

The S2 series is the next cheapest option, and pricing goes up from there. As with the SE models, all of these guitars are extremely versatile in terms of their tonal capabilities.

To limit any one of them to the “rock guitar” label would be an incomplete assessment.

They just do everything really well, which is what has made the PRS line so popular, particularly in recent decades where artists have been called upon to navigate a wider range of styles, both in the studio and as live performers.

All the PRS guitars, SE and otherwise, do a great job of accommodating players in those situations.

Where can I find/buy the PRS SE models?

The PRS "Signature Dealers" listed at the bottom of each product page typically carry the full PRS lineup, but for a more complete list of dealers and international distributers, you can search here.

​SE models are typically easy to locate, as they’re prevalent in the main markets and at most major retailers - both instore and online.

If you’re uncertain of where to look, or if you’re having trouble finding the model you want, check the dealer list and go from there.

What’s your experience with the SE line from PRS?

Do you own one or have a story to share?

Let us know in the comments section below.

Bobby Kittleberger is the founder and editor of Guitar Chalk and a contributing editor at Guitar World. You can get in touch with him here or via Twitter.