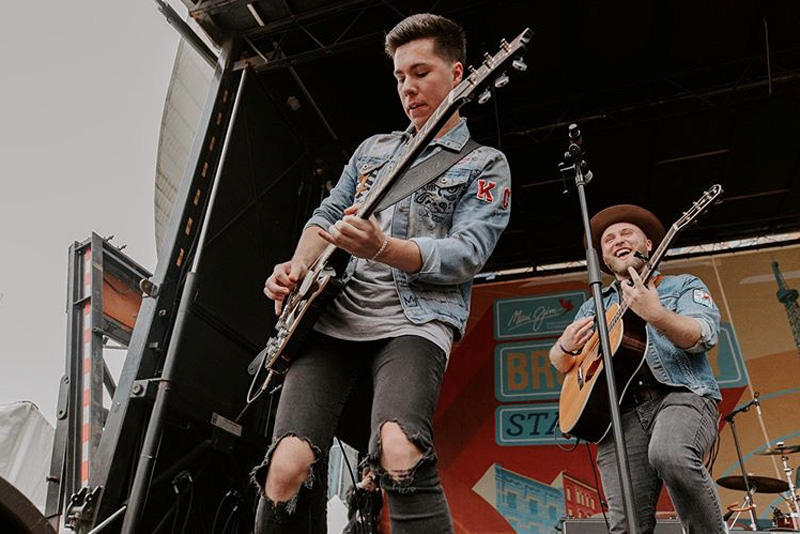 Caleb had this to say about recording the guitar parts on the debut album:

When I approached recording the guitar parts for our debut album, Rivers, I wanted to create a sound that could be nostalgic yet contemporary. After trying many different vintage and brand-new guitars, I found that PRS guitars were the only ones that could achieve the sound I was looking for. From tracking with McCarty’s, DGT’s, to Custom 24’s, PRS was able to give me everything I wanted out of a guitar.

For the album’s title track, “Rivers,” I wanted to use a guitar that would have a very modern and distinguishable sound. The track is very band heavy with a soaring guitar melody in the choruses. For this song, I chose to use a DGT model. I felt like the DGT pickups, along with the quick playability of this model, served the song perfectly.

When approaching the more vintage and clean-tone guitar sounds, I would turn to my McCarty Singlecut. This guitar was the first PRS I ever owned, and I’ve yet to find a guitar with such a full tone. I used my McCarty on the tracks “I Do,” “Picture Of The Way You Are," and “More Than I Do”. The fat sound of the 57/08 pickups breathed life into these anthemic songs.

Without PRS guitars, I believe that our debut record wouldn’t have the same life, youthful energy, or nostalgic feeling you get when listening to the record. I am so thankful for my relationship with PRS and I’m looking forward to a lifetime a making music with their guitars!

The band of six made their debut on The Late Late Show with James Corden on October 8 where they performed the album’s foot-stomping anthem and title track “Rivers.” Check it out below:

King Calaway, while new, has already taken the world by storm – from performing with Ricky Skaggs at the Grand Ole Opry, appearing on Jimmy Kimmel Live!, opening for Garth Brooks at one of his stadium dates, to headlining a festival in Gibraltar, King Calaway has already accomplished major milestones most Country artists can only dream of. The band was lauded by Rolling Stone for bringing an “exuberance to the stage…each taking solo parts between lushly harmonized chorus parts.”

The album’s current single “World For Two” was the Most Added song at Country radio in its first week at US radio, is currently in the Top 10 for consumption per spin and streams per spin, streaming 1.5 million a week, and currently has 38 millions streams to date and continues to grow rapidly across streaming platforms.

More Than I Do – (Nate Cyphert, Ben West, Laura Veltz)

Picture of the Way You Are – (Barry Dean, William Rinehart, Jimmy Robbins)

Love the One You’re With – (Stephen Stills)