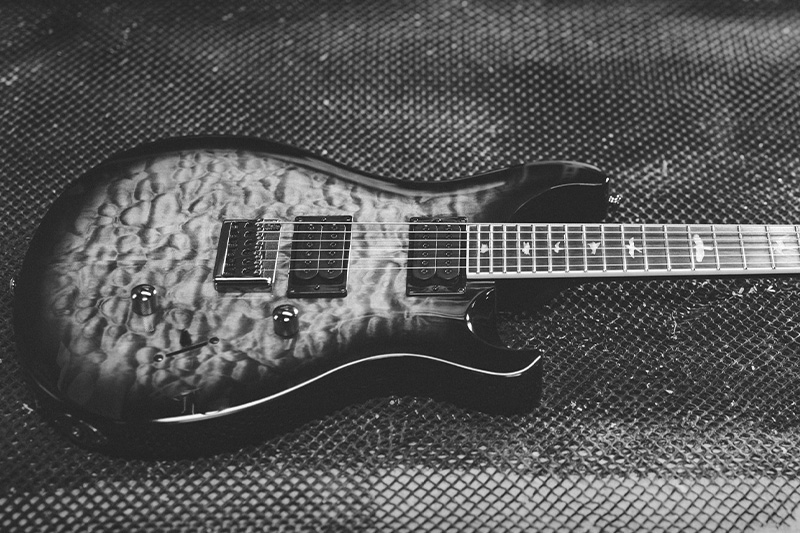 It's been one month since we released our latest SE signature model, the SE Mark Holcomb. This now popular model brings a number of unique specs to the PRS lineup, influenced largely by our collaboration with Mark and understanding his musical style and taste. If you're curious about the SE Mark Holcomb, hear from Mark himself in this Q&A session as we discuss specs, tones, and much more!

PRS: Now that you've had your SE model for a few months, what are your impressions about its performance and reliability on stage?

MH: The SE model prototype that PRS built me in late 2015 has been my main studio guitar since then. I tracked most of my Periphery 3 six-string parts on it because it seemed to speak to me in a unique way. It helped spark a lot of creative ideas for the record, as well. The most impressive aspect of the SE so far has been how its reacted onstage. I’ve used it for a handful of shows and clinics this summer, and it’s been flawless. My main focuses with the SE were that they had to 1) satisfy the exact same main specs as the Maryland-model and 2) be just as durable and reliable in a live context. I’m known to beat up my guitars pretty badly on tour. I pick very hard, I stage dive on a regular basis, and between the ins and outs of touring, my guitars tend to see their fair share of incidental damage. Priority number one for my instruments is that there is zero evidence of that in the way they sound and feel onstage. 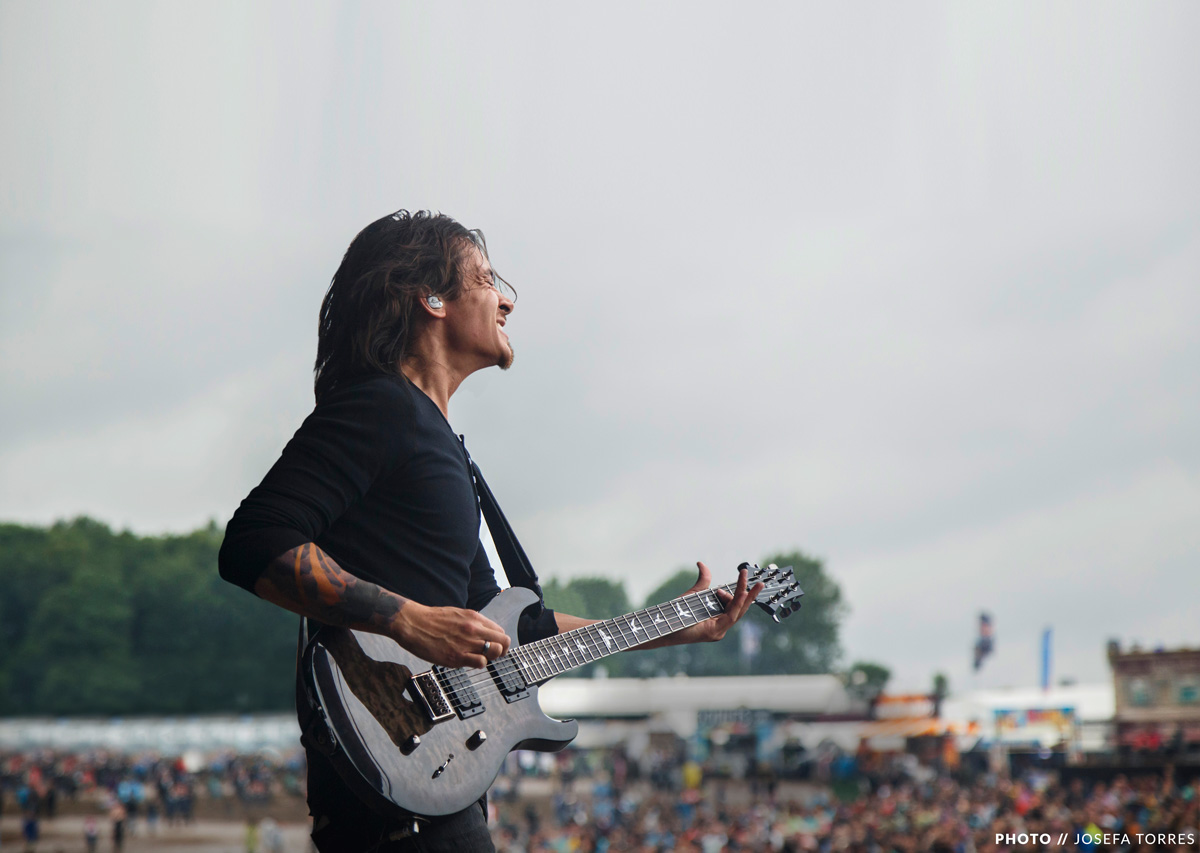 PRS: How do the specs you've chosen help you achieve your sound?

MH: The specs are essential to my comfort level, and bonding with an instrument is completely tied to how comfortable you feel with it in your hands. The most creative points in my career have always come when I’ve bonded with a particular instrument; when I simply can’t put down a guitar. And over the years, I’ve learned to identify exactly which specs keep drawing me back to a guitar. I distilled those down to scale length, fret size, fretboard radius and pickups. If those 4 things aren’t nailed in a guitar, there’s always some part of me that’s somewhat held back. Conversely, when I have all of those specs done to my liking and they’re done well, there’s virtually no effort involved in playing it and instead, all of my focus can be placed on creating. Creating is the ultimate and only real end goal in my mind, so everything needs to serve that.

PRS: What are some of the first things a player will notice after picking up an SE Mark Holcomb?

MH: I hope people notice the attention to detail. This isn’t a guitar with my name slapped on it and pushed out to stores. Every single spec and component of this instrument was belabored and exacted. And since every guitar is set up and QC’d in the PRS factory in Maryland, they all have that same level of attention to detail that PRS is known for. That, combined with the extreme focus and intent of this guitar, is what I hope people take away from it after playing it.

PRS: Some of your guitar soundscapes include effects and processing, how does your SE handle this?

MH: Its ability to handle the spectrum of tones I use in Periphery and Haunted Shores was essential. Periphery is obviously a metal band so it needed to be able to articulate the more aggressive tones we’re known for, but the pickups were designed with the intention to handle everything from clean tones, mid-gain, ambient lines, and even some coil-split-sounding type of stuff. The beauty of Periphery’s guitar aesthetic is that there are no styles or tones that are out of bounds, but the guitar and pickups need to be able to handle that. All of our effects are dialed in on the Fractal Audio Axe Fx II XL, and the pickups were primarily voiced on that same unit to ensure they consistently handled all of my favorite effects and tones.

MH: I’ve always loved purple. Not Barney-purple, but a classier, darker purple, so I pulled in my PRS artist relations guy, Rich Hannon, who coincidentally used to work in the paint department in the PRS factory, so he has a great eye for it. So one day, he and I went into the paint room and tried mocking up a couple colors. We ended up with a couple we were very happy with, but we both agreed that the gray-to-purple-to-black wraparound burst was special and eye-catching, and unlike anything PRS had ever released. Once I received that first 2014 prototype, I knew we had captured a really unique aesthetic.

PRS: In a studio setting, do you find the SE Holcomb to be reliable and useful?

MH: My SE has become my mainstay in the studio. It used to be my 2014 prototype that Paul built me, but I’m actually thinking of retiring that one since it’s seen so much road-wear at this point and I don’t want it to spontaneously combust or something. The SE feels so similar and since it has the same pickups, sounds eerily similar and in some ways, is more pleasant to play. 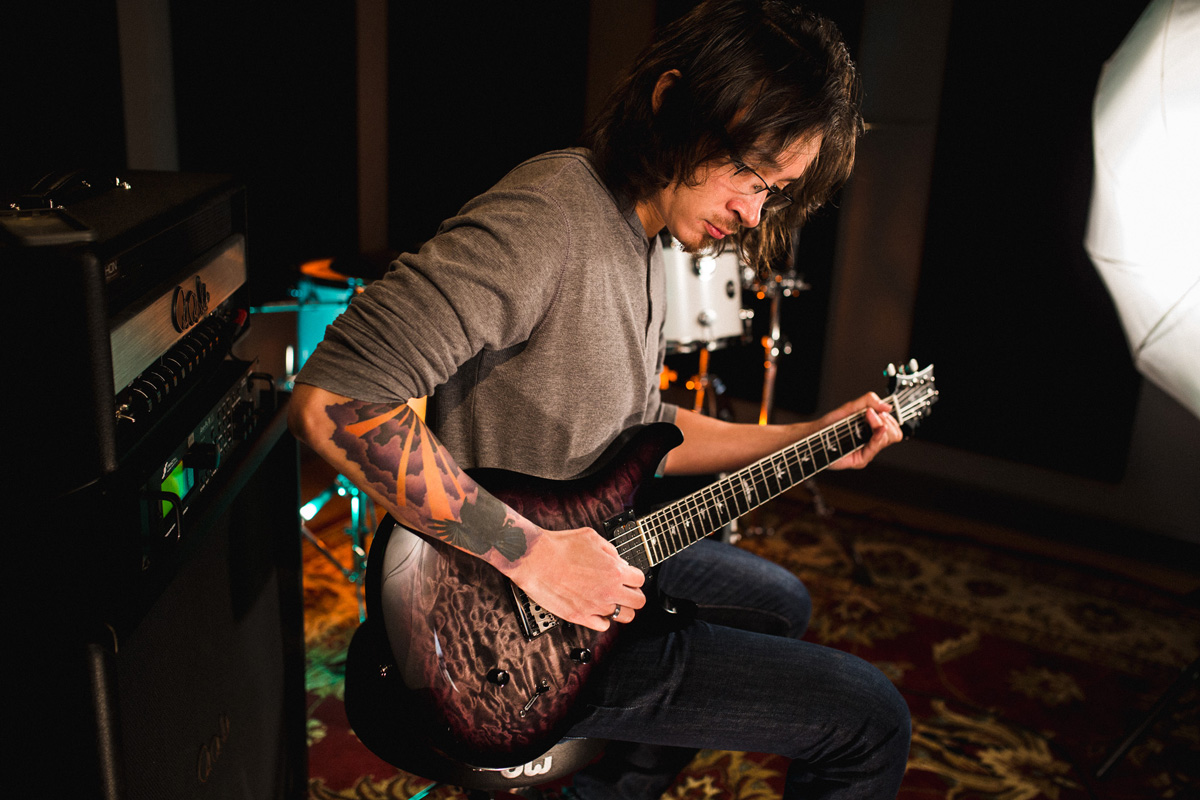 PRS: What styles of music are you using your SE for, outside of progressive Metal?

MH: I’ve been using the SE to write and record Periphery of course, but I’ve also used it for a few other projects. I’ve been writing some material with a singer named Anneke van Giersbergen, an amazing singer from the Netherlands. That’s more restrained, melodic rock and it’s quite inspirational in terms of writing that kind of material. On the opposite side of the spectrum, my other project Haunted Shores is a melodic thrash, death, black metal outfit - and this guitar is absolutely stellar for that. It’s all built on speed and saturated distorted tones, and the guitar is blast to just plug in and go full-caveman on.

PRS: What are your favorite electronics positions for rhythm and lead playing and how do you approach the positions you choose?

MH: Since metal is metal, I do the bulk of my playing on my bridge pickup. The Omega (bridge pickup) received the most scrutiny during the design process, because it positively had to walk that line of aggression and restraint when it comes to rhythm playing. In my lead playing is where I like to experiment some with pickup switching, and lately I’ve been taking advantage of the push/pull function on the tone knob, for songs like “The Way the News Goes” - there are some strat-like tones on that song that sound phenomenal in that position. I’ve begun to play 100% of my clean sections on the Alpha neck pickup. Before we designed that pickup, I used to shy away from using the full neck position during clean sections, because I just lost all of my pick attack and note definition. So I’d use both pickups or just stay on the bridge. But since we’ve voiced it to maintain a lot more of those qualities, I love using my neck pickup in a live context because you can still get that bell-like clarity in the notes and have the glassy quality you typically look for in a neck pickup.

Check out the model overview video with Mark below!

Recently, Mark visited to the Reverb.com headquarters to record a series of videos using his SE model, watch below!

For additional specs, videos, and information on the SE Mark Holcomb, click here!