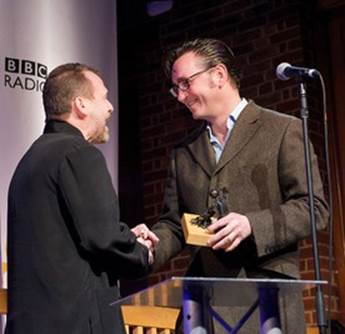 Martin Simpson has been nominated for four "BBC Radio 2 Folk Awards." Martin's nominations are for: Musician of the Year Best Album (Vagrant Stanzas) Best Album (The Full English) Best Group (as part of the Full English) "It's a lovely irony to have both projects up against each other in this year's nominations", says Martin. "I am extremely proud of both CDs and have had some of the best musical times of my life touring both projects. 'Vagrant Stanzas' has to be closest to my heart though and I really hope that the many people who bought it and who have said such lovely things about it, will take the extra bit of time and trouble and vote for it. The BBC Folk Awards is a great showcase for the music that we all love and it's always a really exciting event. This year at the Royal Albert Hall makes it extra special and I'm very pleased to see that one of the great collectors, Cecil Sharp is the first inductee into the new, Hall Of Fame. It's going to be a great night!". If you'd like to support Martin and vote for the awards, click HERE. *Note: voting is only open to UK residents.
← Back To Blog