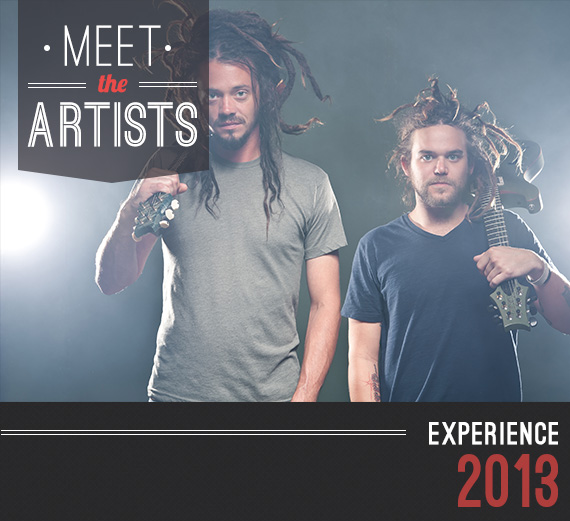 "Over the course of the past few years, SOJA has sold more than 200,000 albums, headlined large theaters in more than 20 countries around the world, generated over 40 million+ YouTube views, amassed over 2 million Facebook fans, and attracted an almost Grateful Dead-like international fanbase that grows with each tour, with caravans of diehards following them from city to city." (www.sojamusic.com/band) SOJA is a quickly rising reggae band from Arlington, Virginia, and the story of how SOJA began working with PRS Guitars is an interesting one.

Before lead guitarist Trevor Young started playing for SOJA, he was a teenage store clerk at Seaford Music where he was exposed daily to PRS guitars. He grew very fond of them and even received a McCarty Hollowbody as a high school graduation present. Trevor used this as his main gigging guitar with his local band "Chowderfoot." One day in 2007, Chowderfoot found themselves playing an outdoor music festival headlined by SOJA. It was at this music festival that Trevor Young met frontman vocalist/guitarist Jacob Hemphill of SOJA. It was also around this time that Paul Reed Smith saw SOJA at the 9:30 Club in downtown Washington, D.C. When asked about this SOJA performance at the 9:30 club, Paul exclaimed, "they weren't good, they were great." Paul met with Jacob Hemphill shortly after at the PRS factory, and Paul gave him a Singlecut Modern Eagle. Trevor Young continued gigging often with Chowderfoot and eventually became exclusively a PRS player, owning several along the way and borrowing one or two from Seaford Music to supplement his arsenal. The paint job on Trevor's Rasta guitar was a gift from Seaford Music shop owner, Dave Herring. Around 2009 as SOJA was rapidly growing its fan-base, Trevor was hired by them to be a Guitar Tech/Stage Manager. As the shows SOJA played grew in size and importance, Trevor started taking his own PRS guitars on tour and allowed Jacob Hemphill to play them. Once Jacob used Trevor's Hollowbody, he grew to love the lighter weight and he felt the sound fit their musical style perfectly, In late 2011, SOJA brought Trevor into the band as a lead guitarist. Soon, Jacob Hemphill and Trevor Young became PRS artists at the recommendation of Seaford Music owner, Dave Herring. A Private Stock Hollowbody was built for Jacob, and Trevor Young was given a cream-colored Mira. PRS Artist Relations shipped the Mira to Trevor Young while they were on the road, arriving just in time for Trevor to play it on "The Tonight Show" with Jay Leno in March of 2012. The PRS/SOJA relationship grew further when the PRS Artist Relations team built an Army Green bass for Bobby Lee. The band will be performing at PRS Experience for the first time this year and it is sure to be a great show. Check out this video to listen to one of SOJA's hit singles: "Not Done Yet"