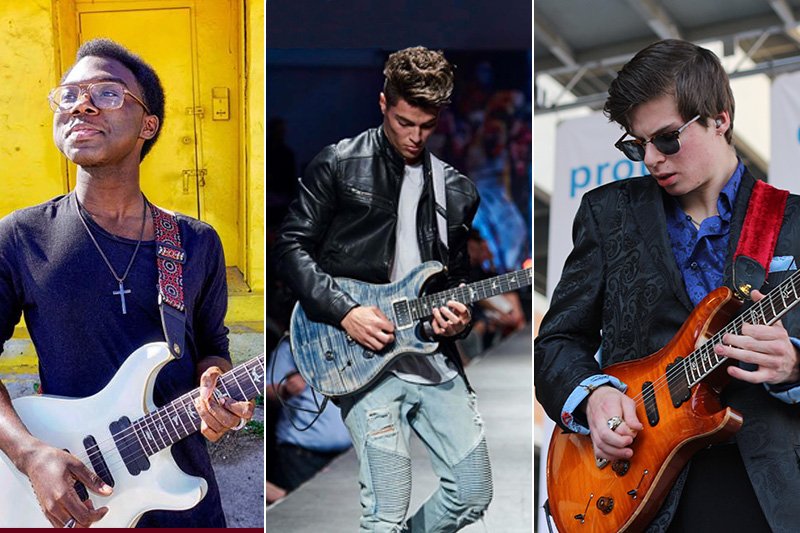 Meet a few of PRS' youngest endorsers! Age is no indicator of talent when it comes to these young players, each of whom undoubtedly has a bright future with guitar.

Read our Q&A with Justus West, Jon Dretto, and Hayden Fogle below!

PRS: How old are you and how long have you been playing guitar?

Justus West: I am 18 years old! I have been playing guitar for 10 years and bass guitar for 5.

Jon Dretto: I’m nineteen and have been studying and playing guitar since age eight. My dad owned music stores for many years and it was only natural that one day, he would bring home a little guitar for me. I was about seven and a half. At eight, I started taking lessons and worked with a great teacher until I was thirteen and decided to study independently.

Hayden Fogle: I just turned 17 years old, and I have been playing guitar since the age of 8. 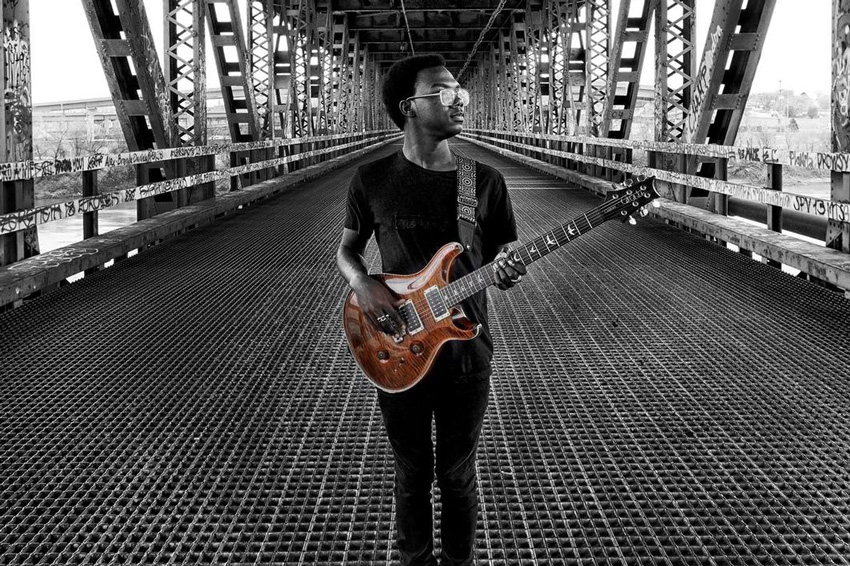 PRS: What was it about that guitar that first pulled you in? Who are some of your biggest musical influences?

Justus West: Both my parents are songwriters and producers for major artist. I always grew up around music, but actually wanted to be a NASCAR driver! I ended being too short to race so I started guitar and fell in love! Some of big musical influences are Snarky Puppy, Isaiah Sharkey, Hans Zimmer, Thundercat, Chick Corea, and Brad Paisley! There are many more, but there is just a taste! lol

Jon Dretto: Because I was so young when I started, I thought that if you played guitar you were the coolest guy in the room. Early on, I was influenced by some of the best metal players like Dragon force and Michael Angelo Batio. I soon discovered, as I explored different genres, some of the greats like Steve Vai, Paul Gilbert, Stevie Ray Vaughn and Guthrie Govan.

Hayden Fogle: Before I started playing guitar, I really got into music that had a lot of guitar in it - when I listened to songs like "Cliffs of Dover" and "Free Bird" (with the epic guitar solos), I fell in love with the sound of the guitar. Then, when I had the chance to pick up and try a guitar at a local music shop, I knew that's what I wanted to do - learn how to play the guitar and try to achieve that sound myself. I used to learn how to play songs that I loved, and once I learned them it motivated me even more to keep learning. What influenced me wasn't so much a particular band or artist, but the musicians that just commanded the stage with their instrument. Musicians like BB King, Steve Vai, Buddy Guy, even Eric Johnson had such attitude and refined skill to their playing, which is definitely what drew me in. I wanted to be doing what they were doing.

PRS: What’s been your coolest experience as a guitar player?

Justus West: My coolest experience as a guitarist would have to be playing and hanging with Vince Gill. It has been quite the surreal experience sitting and gleaning from him as a guitarist, singer, and even just learning how to be a great guy all around.

Jon Dretto: My coolest experience was performing at the 100th Grey Cup (the Canadian equivalent of the Super Bowl) at Rogers Centre in Toronto.

Hayden Fogle: Definitely the coolest experience I had was the first gig I ever played live with a band, which was alongside Buddy Guy. Although I also have to mention playing with Davy Knowles at the PRS Experience 2013 was really awesome. I loved being a part of it, I got to meet a lot of amazing people, and that's where I was first introduced to my current go-to guitar, my PRS 513 which I fell in love with the first time I played it. 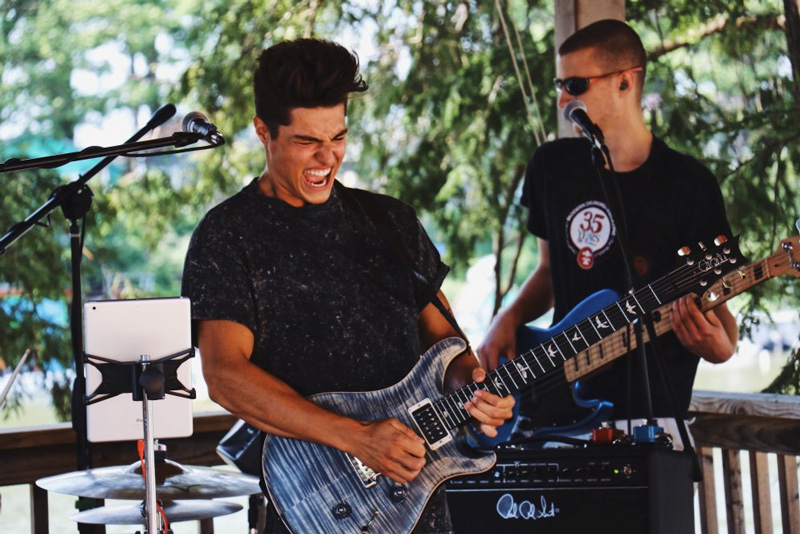 PRS: What do you do to practice - exercises, new tunes, hard tunes, etc.?

Justus West: I practice anything I can find. I am big on ear training and transcribing to broaden my horizons and techniques. I also have a 15min set of scales and different picking exercises I do daily. I also pick a weak skill and specifically learn music that utilizes that technique so that I am constantly pushing myself.

Jon Dretto: I graduated high school in 2016, and I’m now a Music Performance Major at an Upstate, New York college. I’ve been very fortunate to receive a full scholarship. So, in addition to many hours a week working with my new Modern Country-rock band, (the Jon Dretto Band) I spend hours practicing school-related exercises on guitar and piano. Lots of work on scales, chords, harmonies and recital pieces, both classical and jazz.

Hayden Fogle: What has helped my playing a lot is practicing scales to a metronome. This helps build speed, dexterity, and accuracy. Also, playing live with a band helps a lot to build stage presence and "on-site" skills, through years of playing live - I've learned countless lessons that I wouldn't have learned doing anything else. Also, when you can't play with a band, practicing to a backing track is key also. You can find basically any kind of music to practice playing over, it helps to play along with a bass player and drummer when you're practicing guitar.

Justus West: I'm not sure if I can single out one gig in particular, but the most fun I've always had playing guitar is backing up my Mother. My training ground as a child on guitar was playing for her at different churches. It’s not just one gig, but an experience I have had many times! Since she is my mother and has the most beautiful voice, the chemistry is always high and it is always fun. Oh, and you never have to rehearse a lot since you live together.

Jon Dretto: My favorite gig has got to be the one that developed into my association with PRS; playing for fifteen thousand people at NASCAR at the Glen, (NASCAR RACES at Watkins Glen, NY) with the Paul Reed Smith Band, and the Rocky Mountain Stoneflies. After that performance, Jack Higginbotham, PRS President, approached me and my dad. We stayed in touch and within two years, at age fifteen, I was signed as a PRS artist. That’s about as good as a gig gets.

Hayden Fogle: My favorite gig I've played was a fundraiser for a local radio/television station. It was due to the fact that this was the first gig I played to date where I sang and played my own original music in front of a live audience. Previously I had always just been a guitar player, then when I started singing, I sang covers. It was one of the greatest feelings to date playing that show, because I felt the best connection to the audience by singing and playing original music - and them responding so positively to me just being myself onstage. 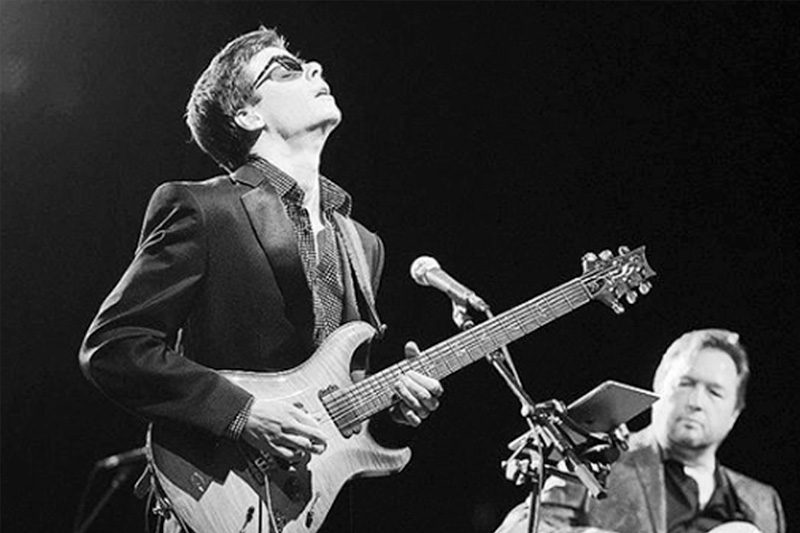 PRS: What is your favorite PRS model and why do you choose to play PRS?

Justus West: My favorite PRS would have to be the 509!! I love mine....I literally play it all day. PRS is widely known for the crazy paint jobs, incredible tone, and high level of playability. I choose PRS because my experience from day one with the product and the company interaction has been nothing but incredible. I have been bitten by a poisonous spider in my left arm which left a lot of scar tissue. I also battled tendinitis for a few years. The ergonomic splendor of the neck on my 509 and Custom 24 has been very "instrumental" in my arms recovery. I will play them forever for sure!

Jon Dretto: Without a doubt, my favorite PRS guitar (and I have a lot of them) is my PRS 408. It’s always been my go to guitar and always performs. PRS has always had the reputation of being the premier American guitar. I had always lusted for a PRS, but it wasn’t until I actually owned one that I realized that the dimensional accuracy, fit and finish was of the highest quality and allowed me, as a player, to take what’s in my head, get it to my hands and have it come out exactly the way I wanted. The perfect music machine.

Hayden Fogle: My favorite PRS is the 513 model - no doubt. Honestly, it just beats every other guitar I've ever played all around, because of the huge range of tones that you can get out of it.