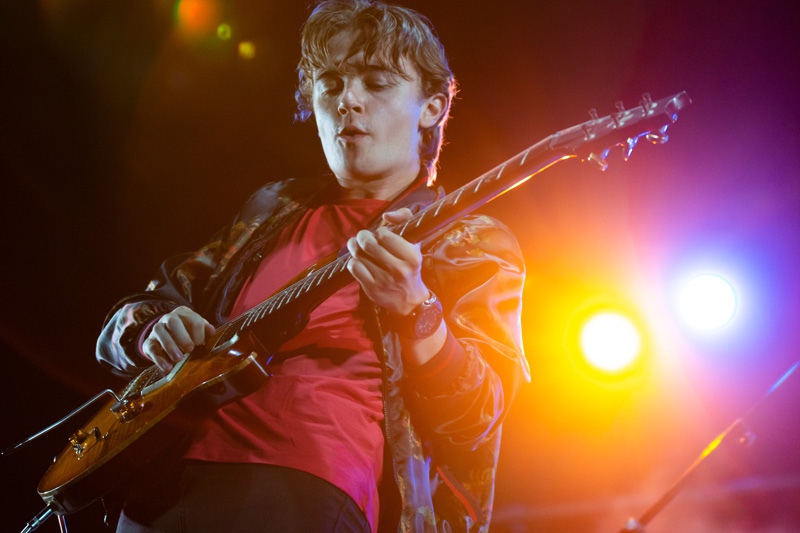 Austin Slack is a young British-born guitarist and singer songwriter. He grew up in Spain where his music career blossomed and he performed at over 1800 concerts prior to the age of 20.

He has played lead guitar in shows like Symphonic Pink Floyd in theaters all over the country, guested with artists like Steve Vai, Maná and many other Spanish bands, and played his own songs in festivals and clubs all over Spain and Sweden. Around this time he was also given the opportunity to be the support act for The Jacksons. In 2018, Austin released his first solo EP and has since released several singles online.

During the 2020 COVID-19 lockdown in Spain, Austin used the time to record and produce his first single release of 2020 and is now working on his next idea. Unfortunately, all touring plans for the year have been put on ice, but he looks forward to playing live soon.

PRS: Who or what was it that originally inspired you to pick up the electric guitar?

AS: I’ve always been surrounded by music since I was a child, my dad used to run a music club in Sheffield (UK) and I used to spend a lot of time back stage with artists like Peter Green, Carl Palmer, Tommy Emmanuel… Every day there was somebody playing there.

The first time I picked up a guitar I was 11, it was a Spanish guitar and I played local traditional music here in Spain. Then for my 12th birthday I got my first electric guitar and everything started from that point.

PRS: We’ve noticed you’ve been performing with a beautiful semi-hollow, tell us a little about it.

AS: Somebody once told me when I was playing in a bar that I should try a PRS Guitar, he said it would complement my guitar style. A year and a half later the same person turned up at one of my gigs with a PRS 2013 Experience 408, and he let me play the gig with it and I instantly fell in love with the guitar. At the time I had been saving up for a guitar from all the bar gigs I was playing, and 1 one week later I bought the guitar from him and I have used it at every gig and recording since that day.

PRS: When playing casually, do you typically focus on writing new material or practicing the technical aspects of guitar?

AS: I try to split my time between practicing, studying theory and also writing new songs. During this lockdown period I have had more time than ever to practice and I have been using it like many other musicians to my advantage. I normally play over 200 concerts a year, so I’m always prepared to try new techniques and ideas on stage playing live since I don’t normally have the time to master them at home.

PRS: What is your general attitude towards using effects? Do you prefer to keep your signal path simple, or have tons of options at your disposal?

AS: Effect pedals are one of my favorite tools to write with and they can really inspire my playing, although I don’t cover up my playing with them or try to make my guitar sound like a different instrument. I love the sound of my guitar plugged straight into the amp, but I always like to add some color especially delays and reverb. I really got into effects and pedals when I did a three month Spanish tour playing lead guitar in a Symphonic Pink Floyd show, where I had to replicate David Gilmour’s sounds over nearly three hours every night.

PRS: At twenty, you have got a long career ahead of you. What are you most looking forward to accomplishing in the future?

AS: I would love to play like most musicians at legendary venues such as MSG, Royal Albert Hall, Red Rocks… Also to meet and get to play with some of my musical heroes, without them I wouldn’t be playing guitar now. Inspiring a younger generation to pick up a guitar, or any instrument and start to play, learn and write music is another part that I would love to achieve. What I’m most looking forward to, is to carry on learning from other musicians and see where my musical journey will take me and everybody that is around me, my band, family and friends.