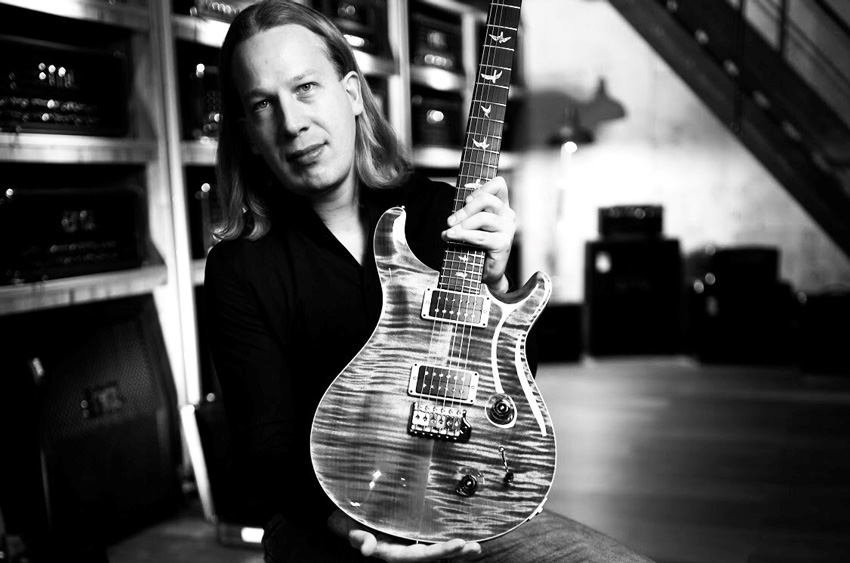 At the young age of 10, German guitarist and songwriter Marco Wriedt was first introduced to guitar and began taking lessons. After playing in school bands as a teenager, he became a professional musician at only 19 years old and began a tour with Jeff Scott Soto (Ex-Journey, Yngwie Malmsteen) and the Los Angeles based, two-time surf world-champion Pop singer, Daize Shayne. In 2007, he hit another milestone in his young career when he joined the rock-band AXXIS. Marco played all over Europe with AXXIS, including shows at high-profile rock festivals such as Wacken, Masters of Rock, Rock Of Ages, and Sweden Rock - top 40 mainstream chart entries followed.

Marco was featured in major guitar magazines (Guitar, Guitar UK and Gitarre & Bass) and played numerous times at Frankfurt Musikmesse, Guitar Summit, the NAMM Show in California and at other well known guitar events all over Europe. In 2010 he also formed his own band "21Octayne." From 2014-2016, 21 Octayne released three records worldwide via AFM-Records: "Into The Open," "2.0," and "Addicted to Thrill."

“It is a privilege to join the PRS Artist roster, every time I play a PRS it really puts a smile on my face, it’s a joy! It’s great to be a PRS artist and experience firsthand the commitment they have to making great guitars of the highest quality, which is very rare to find these days." - Marco Wriedt

PRS: You picked up the guitar at age ten and were playing professionally by twenty. How did you land your first big break?

MW: There were two important milestones for me in my early twenties. I did my first European tour as support act for singer “Jeff Scott Soto” (Ex-Journey) and his guitarist Howie Simon always stood in the wings when I was playing. He told me afterwards that he liked my guitar style and that he would tell some people in L.A about it. After some weeks I received a call from a producer in L.A if I would be interested in playing a tour with Pop/Rock singer Daize Shayne. Daize was a two time surf world champion and started a career as a singer at that time. That was a wonderful tour with great musicians. Shortly after, I did an audition in Germany for the Classic Rock band “AXXIS”. This took things even further. We played all over Europe incl. huge festivals like “Sweden Rock”, “Masters of Rock” and “Wacken Open Air”. We also hit the German Top 40 mainstream charts with various albums. I was still in my early/mid twenties at that time and learned so much from these guys who were already in the industry since the late 80´s. I will be forever grateful for this experience and possibility at that early age. So that was my professional beginning and many great things followed!

PRS: You’ve been associated with a diverse range of acts ranging from hard rock to heavy metal, even some pop. Is there a genre where you feel the most “at home”?

PRS: Your own band The Arc of Light is poised to release its debut album, Cinematic Reverie. The group describes its sound as “cinematic prog” and indeed the first two singles have a distinct film-like quality about them, what inspired this unique sound?

MW: Yes, this band is heavily influenced by film music and Progressive Rock. Our keyboardist David Bertok is a film composer, living in Santa Monica, CA and is responsible for this wonderful cinematic approach. We are lucky to have found an incredible singer in Julian Rolinger who is influenced by legends like Steve Perry or Freddie Mercury. It feels really great and natural to add my guitar style to that musical approach and playing with these wonderful musicians is truly a blessing! Our next single “Cinematic Reverie” will be released February 14th.

PRS: You are also currently working on Guitar Stories, a solo album slated for release this year. What can you tell us about this project? Is it all instrumental or a radical departure from your previous work?

MW: “Guitar Stories” is all about celebrating our beloved Instrument, the guitar! It´s all instrumental with incredible guests like American guitar goddess. Gretchen Menn, whose playing I have always admired dearly. The album represents my personal approach of playing the guitar and I think it will make a lot of people very happy who followed my musical journey over the last couple of years. Make sure to visit the “Guitar Stories” Facebook page at facebook.com/marcowriedtmusic for regular updates. The first single “A Moment of Dialogue” will be released February 21st.

PRS: What’s your current “go-to” PRS model and do you have plans to expand your collection now that you’re a member of the family?

MW: I totally fell in love with the “Custom 22” in copperhead. The neck is really incredible, the pickup configuration offers so many sound possibilities and what I also really love about it: The guitar always stays in tune! I just played it in the studio for the first time and used the very smooth tremolo unit quit a lot. Many guitars go out of tune by doing this. My Custom 22 didn´t! It stayed in tune the whole day. Pretty incredible isn´t it? This is what I love about PRS Guitars: The commitment to every little detail. No compromises!

I really want to try out a McCarty 594 and a Hollowbody II Piezo as well. Really excited about that!