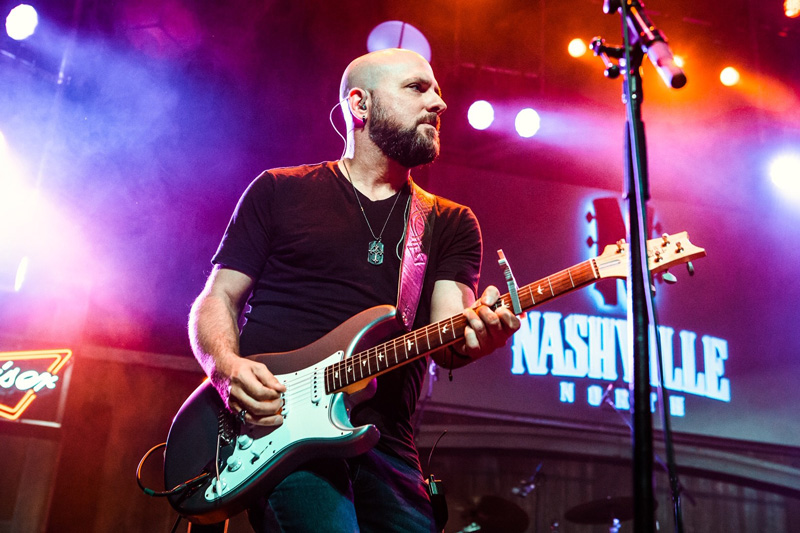 Michael J began his musical career as the lead singer, guitarist, and primary songwriter for Rochester, NY band Exploding Boy in 1987. In their 13 years together, the band performed thousands of shows all over the Eastern US and shared stages with A Flock Of Seagulls, Joe Walsh, Billy Squier, Cheap Trick, and The Goo Goo Dolls among others. The band was named one of the "Top 12 Best Unsigned Bands of 1999" by Billboard and Musician magazines shortly before disbanding.

Michael launched a solo career in 2000 and went on to write with Stan Lynch, legendary drummer for Tom Petty And The Heartbreakers, and has also worked with Ken Block of Sister Hazel and Chris Nix, guitarist for Jonathan Davis of Korn. He has released 6 self-produced full-length solo records, several EP’s and numerous singles, and also has production and engineering credits on releases by a number of independent up-and-coming artists.

Michael started a podcast called “Turn It On” in 2015 which features long-form interviews with everyone from bassist Billy Sheehan, to members of Daughtry, Chicago, The Goo Goo Dolls, The Doobie Brothers, Longwave, The Smashing Pumpkins, Vertical Horizon and a host of others. There are currently 58 free episodes available at tiopod.com, iTunes, Apple Podcasts, Stitcher, and Spotify with more on the way.

PRS: You’ve been playing a Silver Sky lately, what is it about that model that initially attracted you?

MP: My first real guitar was a 1983 Strat. I’ve played just about every type of guitar in different “seasons” over the course of my career from Les Paul’s and SG’s to Telecasters, but Strat-style guitars are always home base for me and I keep coming back to them. I was over at guitarist Brian Craddock of Daughtry’s home studio awhile back and he was walking me through his incredible collection of PRS guitars. I had played a few PRS models over the years but had never actually owned any, although I really liked the McCarty singlecuts I had tried. I was telling Brian about my love of Strats and he ran right over to his Silver Sky, handed it to me and said, “you NEED to check this out”. That was all it took for me. Paul, John Mayer, and the PRS team got every single element so incredibly right. The Silver Sky almost demands that I dig into it more than any other guitar I’ve ever owned. In a way, I feel like it pushes me to stretch my abilities on a nightly basis. It is a perfect ecosystem, from the neck shape, the fretboard, the overall lighter weight, and the KILLER pickups, which I think are the best sounding single coils I’ve ever used. It’s just an incredibly expressive instrument. 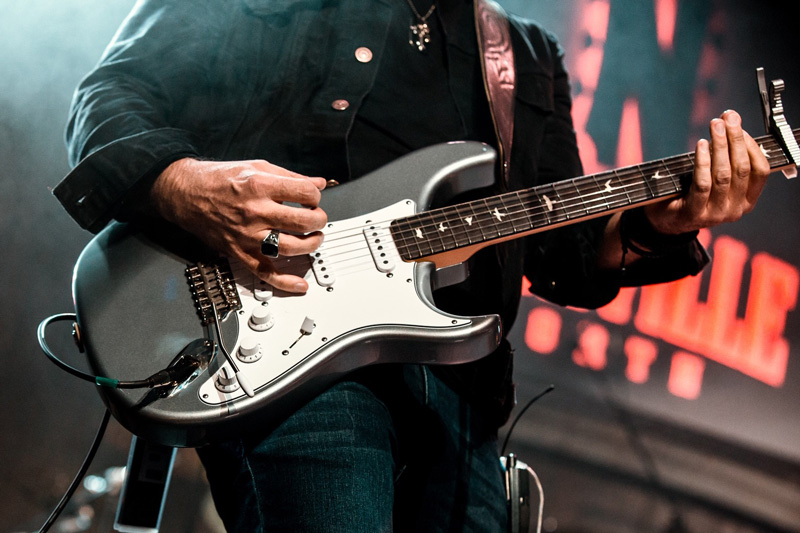 PRS: Stylistically, what are your top three influences as a guitarist?

MP: Three guitarists that helped to shape my playing and my approach to guitar and music are, Mike Campbell of The Heartbreakers, The Edge of U2, and David Gilmour of Pink Floyd. Each of their respective bands has had a profound influence on me as well. I’ve always been drawn to the concept of economy and the use of space. My father, who is a brilliant jazz saxophonist, always told me, “what you choose NOT to play is equally as important as what you do play”, and that advice has stayed with me. I like to look at notes as a precious commodity. It’s important not to spend your notes all at once. Pick your moments carefully. Each one you play needs to mean something and not just be a random barrage of technique to try and impress people or get their attention. For me it’s all about melody, note choice, and feel. Music without heart is just mathematics. The best and most memorable guitar solos to me are the ones that you can sing along with. By the same token, some of the most iconic guitar riffs (and songs) throughout the history of popular music are the simplest ones as well. I try really hard to adhere to these ideas with everything I do and I credit Campbell, Edge, and Gilmour and their iconic bands with instilling these ideas and approaches in me.

PRS: What are you currently listening to in your downtime?

MP: At the moment I’m listening to “Ghosts” by Big Wreck and a record called “Castles” by an extraordinary female artist called Lissie that I stumbled upon recently completely by accident. 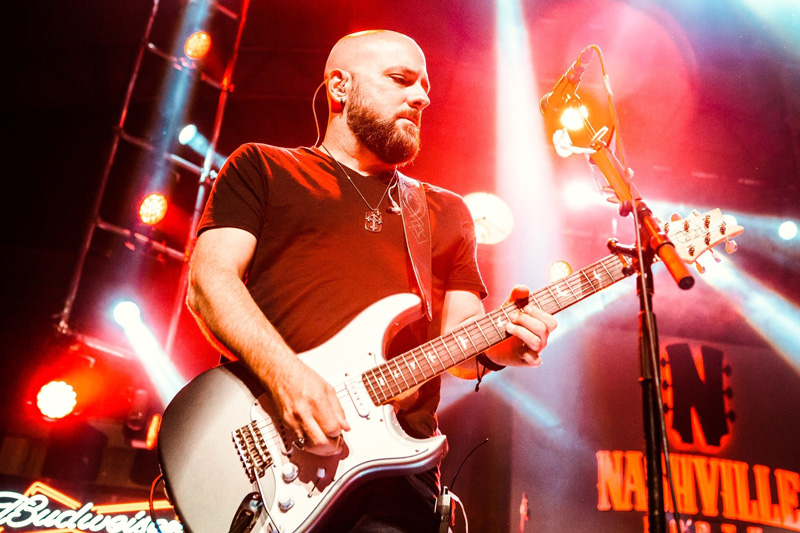 PRS: You’re currently on the road with Aaron Goodvin, what other artists have you supported?

PRS: How has your touring rig changed for this current tour?

MP: I still deal with backline gear on a majority of the dates we’re doing at the moment so it’s always a roll of the dice for me to see what kind of amp I’m going to get to use on any given night. Most of our gigs are currently fly-dates as well. These factors dictated for me that I scale down and keep things as simple and compact as possible. Aaron’s set covers a fairly broad spectrum of tones which thankfully I’m able to achieve by using a small pedalboard in conjunction with the volume and tone controls and pickup selector switch on my Silver Sky. I can cover a lot of ground that way and my tone stays a bit more pure as well. My board is a Temple Audio Solo 18 with a KORG Pitchblack mini tuner, a C3PO Klon clone by Electric Death Pedals, an Abunai 2 OD by Tonefreak Effects, a Dispatch Master delay/reverb by Earthquaker Devices, an EHX nano POG, and a Strymon El Capistan delay. 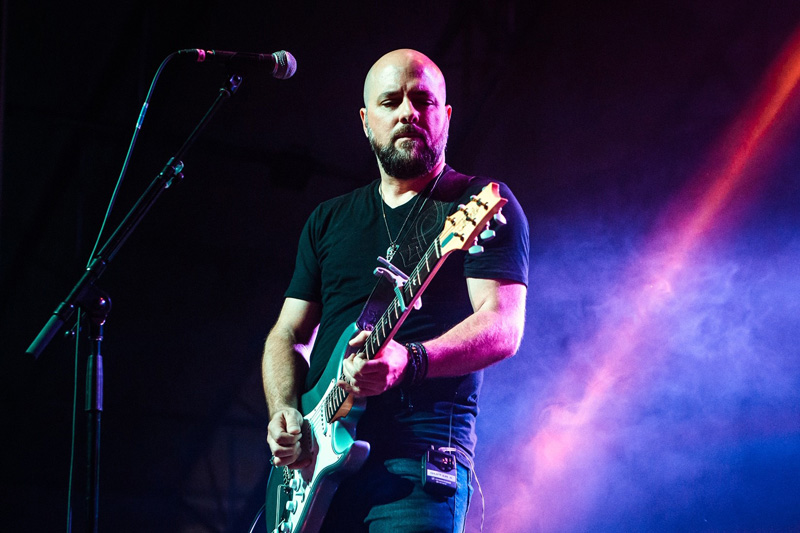