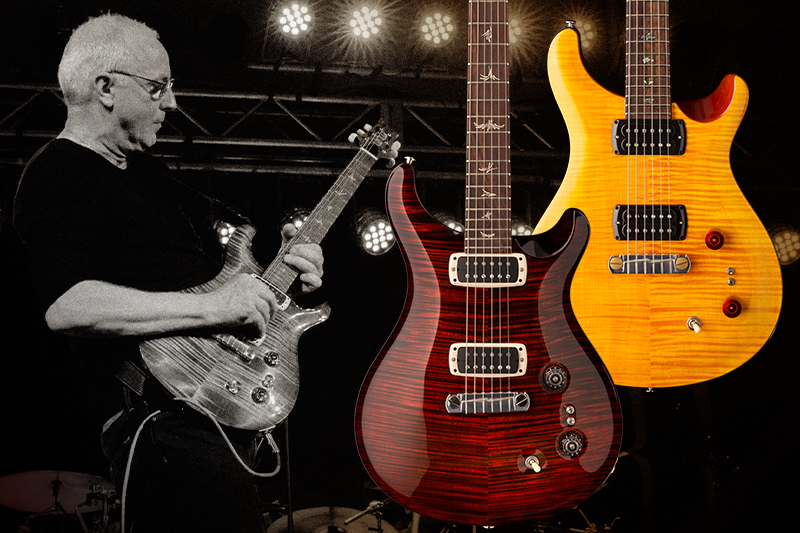 From the earliest release of the "Paul's Guitar," the framework for the model has been Paul Reed Smith’s latest discoveries surrounding tone. For 2019, the story continues with updates to his core model and the introduction of the Paul's Guitar to our SE lineup. Learn more about the development of both models below!

While many think of Paul primarily as a guitar maker, he was first a guitar player. This revamped model represents Paul’s vision of a versatile stage and studio-ready guitar that can achieve all the right tones. As a man who has every option available to him, Paul’s personal design choices include mahogany bodies with maple tops, Honduran rosewood fretboards, Nitrocellulose finishes, “Brushstroke” bird inlays, and narrow pickup bobbins. The Paul’s Guitar model also includes PRS’s TCI (Tuned Capacitance and Inductance) treble and bass pickups with two mini-toggle switches that allow players to put either or both pickups in either humbucking or true single coil mode.

"I don’t just like the newest version of my guitar, I love it. With these new pickups, I can move from a strong bridge pickup to a very clear, “whoopy” neck pickup – you can hear every note – by just setting the mini-toggles and using the 3-way as normal. It’s a highly musical and very usable setup. This guitar has clear, spanky single coils when you split the pickups but a very full soapbar quality when they are in humbucking mode. It’s just beautiful.- Paul Reed Smith

Below, Paul discusses what this model means to him as a musician:

Watch the product demo for the Paul's Guitar below:

When PRS Chief Operating Officer Jack Higginbotham and Paul Reed Smith worked together to develop the first SE version of the Paul's Guitar, they knew they wanted to do it right.

"The Paul’s Guitar, like the Modern Eagle before it, has always been about Paul’s latest discoveries in guitar making. To bring this guitar into the SE Series, we knew the tone, functionality, and playability had to be right and had to be consistent." - Jack Higginbotham

"The SE Paul’s Guitar is a great example of design, engineering, and teamwork. It’s as close to home as we could get inside of the SE Series, and I am very proud of it." - Paul Reed Smith

Watch the product demo for the SE Paul's Guitar below:

To read our interview with Paul from his perspective as a musician, click here.