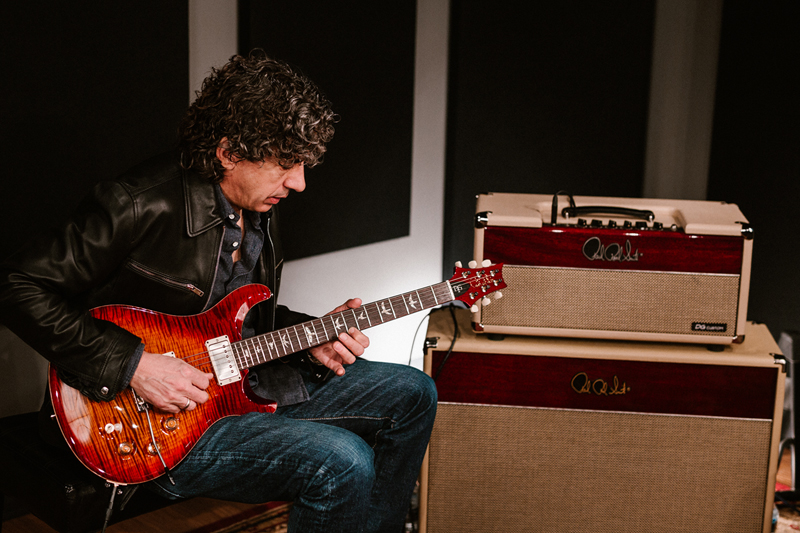 In 1985, David Grissom bought his first PRS instrument when our company was less than a year old. Around this time, Paul Reed Smith visited the Dallas Guitar Show and remembers seeing David playing his PRS live. Paul was blown away by David's tremendous skill and command of the instrument, thus beginning a long and very collaborative relationship between David and PRS guitars.

David's fruitful career has seen him touring and recording with artists ranging from texas legend Joe Ely to John Mellencamp to the Dixie Chicks. His playing has been featured on countless recordings and he has gained notoriety as both a session guitarist and solo artist.

In 2007, PRS first introduced David's signature guitar, the DGT, and later released his signature amp, the DG Custom. Both products represent the culmination of a 25+ year working relationship with PRS.

Below, learn more about each model and watch David and Paul discuss their rich history and pursuit of a special sound.

“The DGT is a product a lot of miles down the road: a lot of gigs, a lot of records. It’s like picking up a vintage guitar. It sounds like a vintage guitar, and out of the box, it’s ready to go. There’s a whole lot of thought gone into this. The DGT is pretty perfect to me." - David Grissom

“The DG Custom 30 is the culmination of a three-year collaboration between myself and Doug Sewell. After extensive designing, redesigning, and repeated comparisons to the amps I have cherry picked over the years, we have come up with an amp that would rival the best of my vintage amps. Equally well-suited to both live situations and studio work, this amp is far from a knockoff. I am blown away. I'm hopeful that other players will find it as inspiring and musical as I do.” - David Grissom

For more on David Grissom and his relationship with Paul, watch their full conversation here!