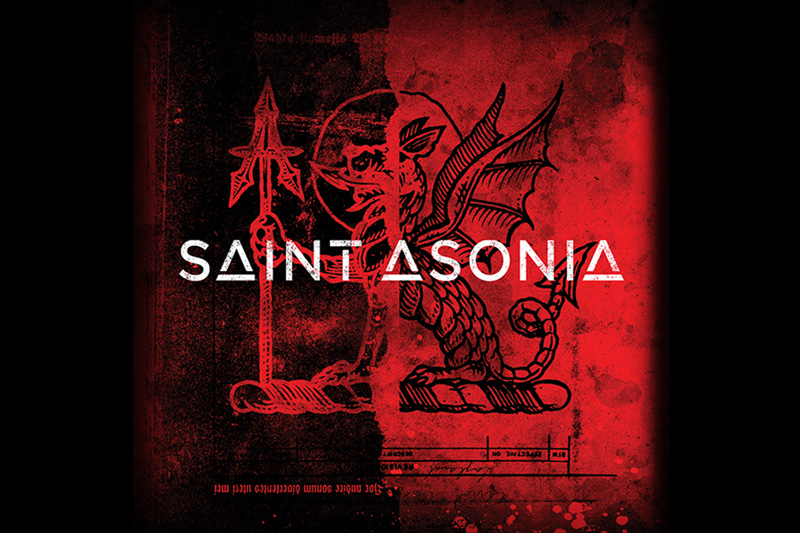 Saint Asonia is an all-star team of musicians including Adam Gontier (former lead singer of Three Days Grace), Mike Mushok (Staind), Corey Lowery (Eye Empire and Dark New Day) and Rich Beddoe (former drummer for Finger Eleven). Their eagerly anticipated debut album is set to release on July 31, 2015. Read below to hear the story behind the album. --- Sometimes, a call from an old friend can change everything. Saint Asonia’s origins stem back to the moment former Three Days Grace singer Adam Gontier received a call out of the blue from Staind lead guitarist Mike Mushok about “writing some songs” in 2014. The two previously shared the stage on multiple tours together, but a mutual passion united them on this front. Eschewing the proverbial trappings of the industry and social media machines and barely telling a soul, they both aimed to break the mold in a new outfit with a vision fueled by nothing more than their dilignce, dedication, and love of music. Tapping the talents of mutual friends, drummer Rich Beddoe [ex-Finger Eleven] and bassist/background vocalist Corey Lowery [Dark New Day, Stereomud, Eye Empire], the lineup formally solidified. By the beginning of 2015, their initial three-song experiment quickly turned into a full-blown studio session with producer, engineer, and mixer Johnny K [Sevendust, Disturbed, Megadeth] at his Groovemaster Studios in Chicago, IL. “I’ve always been a huge fan of Adam,” says Mushok. “Staind toured a bunch with Three Days Grace. Whenever we did, I would always make sure to watch them. I had been looking for somebody to really fit the sort of music I’d been writing. Adam seemed perfect, so I reached out. Pretty quickly, we realized we were on the same page. The vision was just to write the best songs we could without regard for what might happen as a result.” What did happen thereafter happened quickly once a few prominent industry executives heard the music they’d created, leading to a world-wide signing at RCA Records. “Mike and I both knew exactly what we wanted to do,” exclaims Gontier. “We knew the kind of record we were after. He’s such an incredible guitar player, and writing lyrics came very easily. Nothing was being dissected or sugarcoated. The experience of making this music was a chance for me to freely express myself without any filters for the first time. Once we got into the studio, we were done after five weeks. Asonia actually means Tone Deaf. It’s a reminder to block out exterior influences and voices and be myself. It’s different from anything either of us have done in the past. It’s something rock music needs right now. It’s raw, real, and straight from our hearts.” Following that muse and a “gut feeling,” Saint Asonia set out on this new course together, challenging each other in the studio. Instead of opting for a polished and shiny aesthetic so often associated with modern rock, they went in the opposite direction. They passionately tackled takes without editing or overdubs. Gontier would match the groundswell of infectious intensity within Mushok’s signature heavy guitar playing as they tapped into something fresh for both of them. As a result, their self-titled full-length album [RCA Records] stands out as an unbridled, uncaged, and undeniable collection. 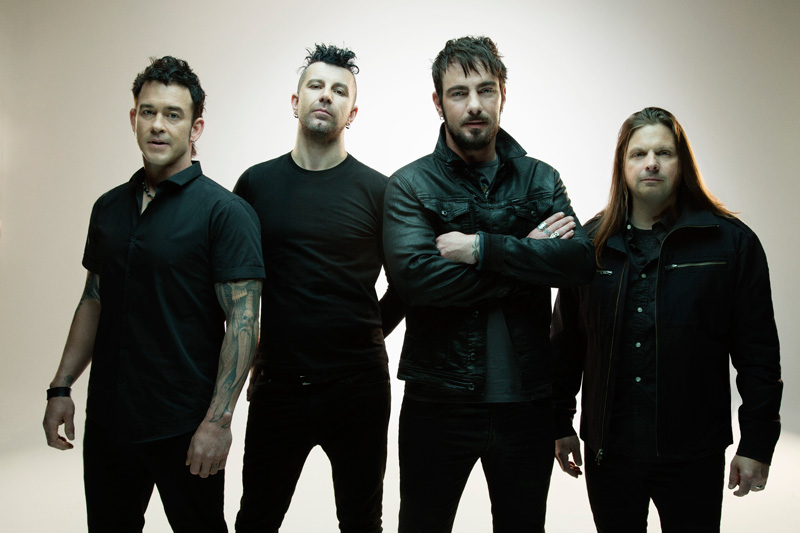 “The approach to vocals was completely different from any record I’ve ever made,” admits Gontier. “Johnny and I agreed on doing a couple takes all the way through from each song and using the best one in its entirety. There aren’t many doubled vocals or effects manipulating my voice to make it sound bigger. This is the rawest I’ve ever sounded. It’s the same with Mike and his guitar playing. He laid into the solos without overthinking them.” “It was sort of easy,” smiles Mushok. “I would show him parts, and he would just sing. He came up with great lyrics and melodies. Next thing you know, we had 15 songs. That’s how it happened. As far as my playing, I wanted to expand, grow, and do a little bit more. It’s enjoyable for me. When Staind started, I used to solo all the time. I decided just to focus on songs. As the years went on, it became fun again. That’s a part of this, too.” The band’s first single “Better Place” ignites a calculated guitar intro before converging on a towering refrain from Gontier. Mushok unleashes a torrential solo that’s as focused as it is fiery, properly introducing their sound. “It was the first song Adam did of the demos,” Mushok goes on. “He really nailed what I was thinking.” “When Mike played it, I started singing a melody in about 30 seconds,” Gontier recalls. “Lyrically, it’s about being in a dark place and finally breaking free of that and getting to a better place. It’s a great representation of Saint Asonia as a whole. It’s straightforward and catchy, but highlights what we all bring to the table.”

Elsewhere on the record, the distorted chug of “Blow Me Wide Open” entwines with Gontier’s harmonies before snapping into a haunting clean bridge punctuated by Mushok’s fretwork. “Trying to Catch Up with the World” strips everything down to an acoustic guitar and vocal, emanating palpable and poetic emotion. “To me, it’s basically about an abusive relationship—regardless of the type of abuse,” says Gontier. “It paints a picture and tells a story for the listener.” The album seesaws between the visceral “fuck you” of “Fairytale” and the heartfelt dedication to Gontier’s wife “Dying Slowly.” These dynamics converge on the stomping groove of “Let Me Live My Life.” “That’s actually a song I wrote for him directly,” adds Mushok. “I was thinking of Adam’s voice, and I put that down one night. It’s one of my favorites still I’ve got to say!” “That one is about asking somebody to let go and let me move on with my own life,” the singer continues. “The songs all come from different places but mainly my past.”

Saint Asonia have done everything on their own terms from their genesis. Rather than announcing anything typical, they posted a cryptic video in May 2015 citing nothing more than “the combined forces behind 25 Top Ten Rock Singles and seventeen #1 hit songs.” Unveiling everything on stage instead, the band would make its formal live debut in front of 15,000 fans on the main stage of the United States’ biggest rock festival Rock on the Range a week later. The boys won’t be any strangers to the road, and this is only the beginning. “I’m really proud that we created such a cohesive body of work,” says Mushok. “I hope when people hear it they become fans and want to hit a show! That’s why you do it. You go out there, play the music, and continue on to make another record. That’s what we all want.” “We’re not just planning one or two records,” Gontier declares. “We want to be five records deep with an entire body of work and hundreds of shows behind us. We’re going to work our asses off for sure.” See below for Saint Asonia's upcoming tour dates. 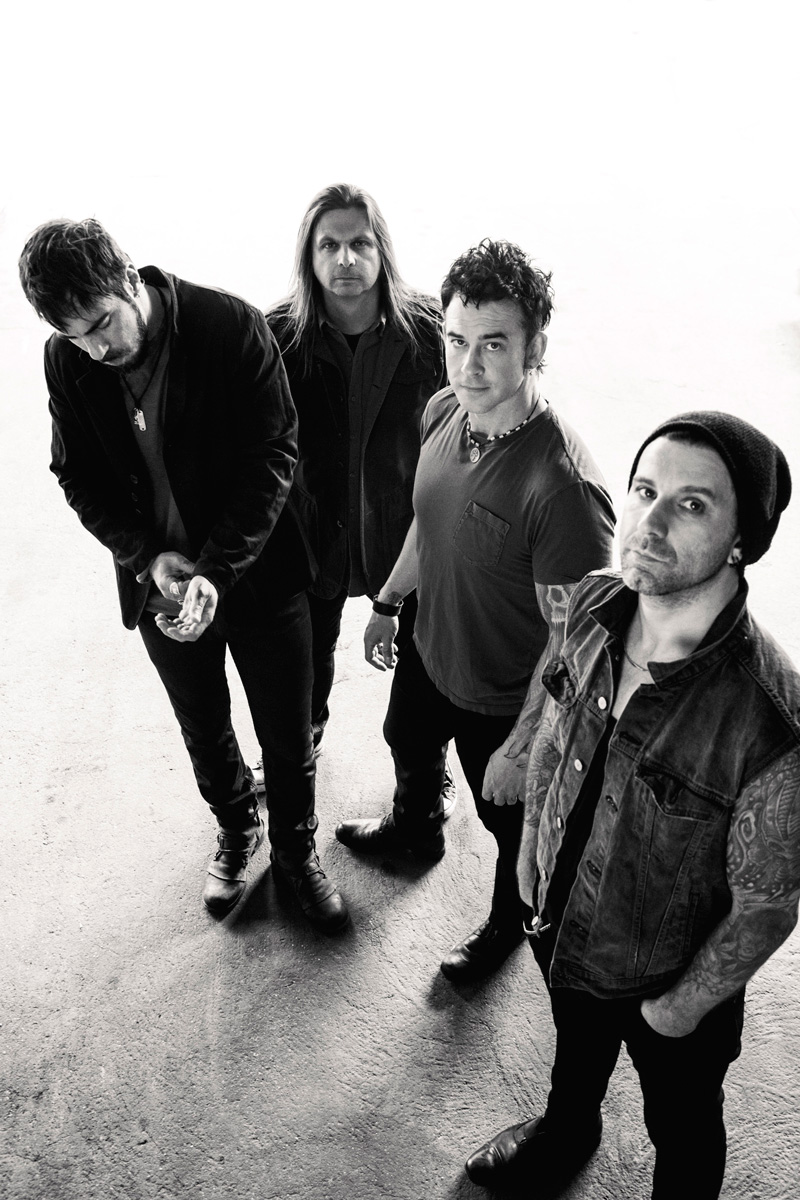