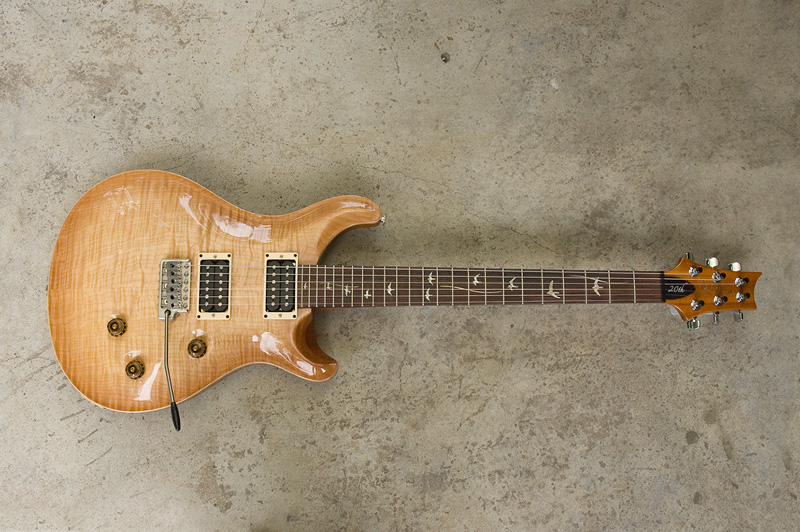 We just added a few new stories from our fans of their experience buying a PRS. Share your story with us and we may post it to the site!

Read a sample story below!

My wife and I were on our 7th wedding anniversary camping trip and due to a heavy rainstorm, we drove to the nearest town just to do some shopping and errands while the rain was coming down. She wanted to go to a certain craft store and as we pulled into the parking lot I noticed a music store down the sidewalk. I told her I would join her in a few minutes, after going in to look at and play some guitars. As soon as I walked in, it was love at first site. A 20th Anniversary Custom 24 in Vintage Natural grabbed my heart and would not let go. 45 minutes later, after playing it and justifying the biggest impulse buy of my life, I bought it and then met back up with my wife. She could tell by the look on my face that I had been “up to something.” Her first words were “what have you done?” Then I had to confess. She was surprised at such an impulse buy, but wound up being OK with it, knowing it was a well thought out decision. I told her I knew in less than a minute that I wanted to buy that guitar and spent the other 44 minutes figuring out how to pay for it and what I was going to tell her when we met up. Well, the rain finally stopped and we had a great remainder of our 7th anniversary, and a few days later I got to enjoy my 20th anniversary (PRS) when it arrived from the music store. Now 10 years later, it’s still one of my favorite guitars of all time and was the gateway to all things PRS, like a 2nd Custom 24, two PRS amps, as well as attending the Experience PRS event every year since 2008.

To read more stories or share your own, head over to www.prsguitars.com/myprs.