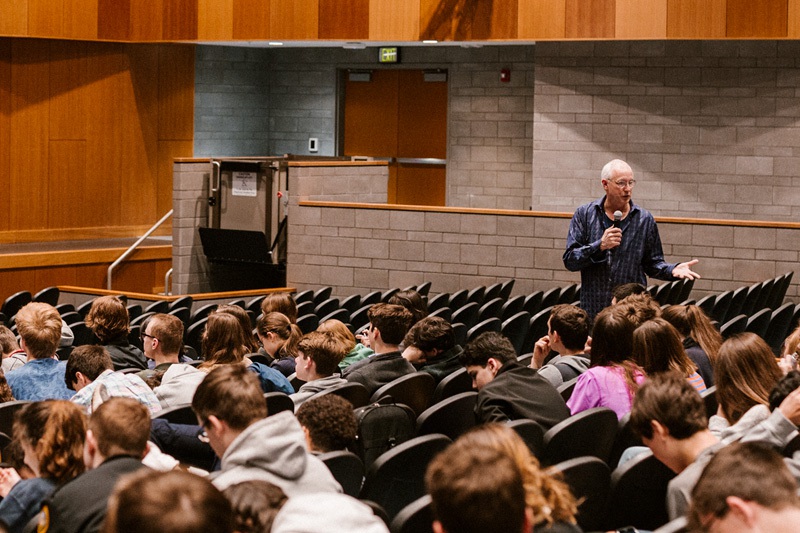 When many people think of Paul Reed Smith, they think of a meticulous, creative luthier who built our company up to a reputation of master craftsmanship and innovation. As a company, we spend countless hours on each and every model making sure that every PRS instrument is ready to do its job on a stage, in a studio, or kicking back at home.

There is however another side to Paul that is not widely known: Paul is passionate about teaching and mentoring.

For decades, Paul, an accomplished guitarist whose band, the PRS Band, has appeared on stages across the globe, has been teaching guitar and music students. He also has taught at numerous Maryland Middle and High Schools through his School Teaching Events, which revolve around music and positive life planning.

Last year, Paul teamed up with the prestigious Maryland Hall and several world-class musicians to offer a week-long Musician’s Clinic that culminated in an exciting Teacher/Student Concert.

This year, Maryland Hall and Paul want to open up the program and offer the courses in a virtual setting allowing for a broader audience and safe learning environment. Paul and several distinguished musicians, including legendary drummer Dennis Chambers, YouTube guitar teaching experts Tim Pierce and Tyler Larson, Session directors Gary Grainger (groove & bass) and Greg Grainger (groove & drums), known worldwide as “The Grainger Brothers” as well as some of Maryland’s best musicians, including Michael Ault (guitar), Bryan Ewald (guitar), Benjie Porecki (keys), Mia Samone (vocals), and Bill Nelson (guitar) will be giving clinics and offering instruction. The four-day Virtual Program will take place August 10-13, 2020 and is open to musicians and enthusiasts of all ages around the world.

The School’s theme is “Understanding Harmony, Melody, and Rhythm to Make You a Better Musician.” All sessions will be taught via live video stream and will include extensive interactive portions for students of all skillsets, ages, and instruments to engage with their teachers. Through a Master Class online environment, all attendees will be given real ways to view and experience music and improve their playing abilities. Master classes will include how to groove, beginner to advanced guitar, keyboards, vocals, drums, and bass.

Watch Paul talk about his plans for the sessions:

When: Monday, August 10 through Thursday, August 13, Daily from 11 am – 4:30 pm (US Eastern Standard Time) Where: Online. The event will be livestreamed on marylandhallmusicschool.com/live. Registrants will receive the link and password in an confirmation email upon registration.

Tuition: $100/person for all 4 days of all Master classes

*Scholarships are available for Maryland-based students through a grant from the Annapolis Musicians Fund for Musicians’ (AMFM) David Glaser Education Fund. For Scholarship information, contact the Maryland Hall Education Department at [email protected]

The event is quickly approaching and American Musical Supply is giving you the chance to win 1 of 40 scholarships.

Enter for your chance to win!

MEET THE SESSION DIRECTORS AND TEACHERS

Smith is an internationally known guitar maker, musician and guitar player. In addition to performing and recording with his own band, Paul has played with artists such as Vertical Horizon, Creed and Santana. He was honored by Vintage Guitar Magazine as a Hall of Fame inductee 2011 and was named Maryland’s Small Business Owner Person of the Year in 2002.

Chambers is an American drummer who has recorded and performed with John Scofield, George Duke, Brecker Brothers, Santana, Parliament/Funkadelic, John McLaughlin, Niacin, Mike Stern, CAB, Greg Howe, and many others. He was inducted into the Modern Drummer Hall of Fame in 2001. Despite a lack of formal training, Chambers has become famous among drummers for his special techniques and speed. Chambers is particularly regarded for his ability to play "in the pocket." He has helped many young drummers, the most prominent being Tony Royster, Jr. Chambers began drumming at the age of four years, and was gigging in Baltimore-area nightclubs by the age of six.

Tyler Larson is a musician of many influences. With over fifteen years’ experience playing the guitar, he's appeared on several studio albums, performed with many diverse artists, and studied with some of the most renowned guitarists on the planet, including Tomo Fujita, Joe Stump, Dave Fiuczynski, Dave Tronzo, and others. After earning a B.M. Degree from the legendary Berklee College of Music, he began his career as a professional musician. In 2015, Larson founded Music is Win, which has carved out a deep niche in the music scene, with its videos amassing over 200,000,000 views to date and 1.04M subscribers on YouTube. Larson is also the creator of the extremely popular Guitar Super System, which has enrolled tens of thousands of guitar players to date. Larson has received endorsements from PRS Guitars, Universal Audio, Victory Amps, Adam Audio, and many other esteemed companies. He's been featured in various online and print publications, including Guitar World, Guitar Player Magazine, Ultimate-Guitar, InTune Magazine, and more.

Gary Grainger’s seamless approach to virtually any style of music makes him one of the most sought after bass players in the world. He has performed and done thousands of recordings, tours and TV appearances with such notable artists as John Scofield, Dennis Chambers, Nancy Wilson, Nelson Rangel, George Duke, Maysa, Ken Navaro, Acoustic Alchemy, Eric Marienthal and Bill Evans.

A skilled architect of rhythm, Greg Grainger is surprisingly fresh in his artistry and musical perspective. Upon hearing him, it is easy to see why Whitney Houston signed him for her 1988 world tour, why Britain’s Rhythm Magazine called his work “solid and tasteful” dubbing him a “rhythm master” and why he is the drummer for international jazz artists such as Acoustic Alchemy and Kim Waters. Along with being a highly skilled drummer and teacher, he was the Musical Director for Maysa (the voice of Incognito’s Deep Waters and A Shade of Blue). In addition, at the age of 14, Greg was awarded a scholarship to the highly respected Peabody Conservatory of Music at Johns Hopkins University.

We hope to see you online for these exciting sessions!