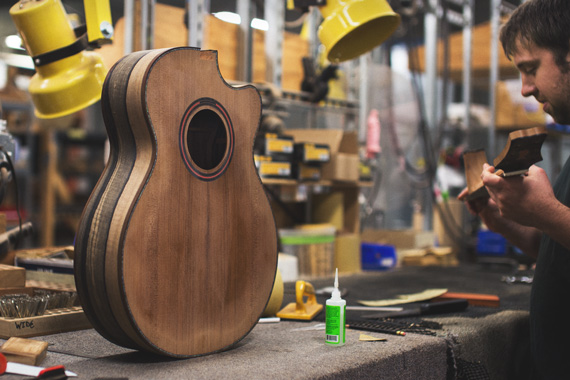 A guitar with a great story to tell

The redwood timbers used for the top of this PRS Private Stock acoustic instrument once framed the backdrop to the story of the last great train robbery of the west. Harvested around 1880 in Oregon, this Coastal Redwood was to spend the next 120 years air-drying in Tunnel No. 13 in the Siskiyou Mountains. Naturally aged, this redwood is resonant with a full, complex tone that is a slightly darker than spruce but with more headroom than cedar. This fine-grained old-growth redwood is thought to have been more than 2,000 years old at the time of harvest, imbuing these instruments with historical significance, tone, and beauty.

The Last Great (attempted) Train Robbery of the West

As the story goes, on October 11, 1923, the D’Autremont brothers attempted to rob the southbound Southern Pacific Railroad “Gold Special” No. 13 in the Siskiyou Mountains in Oregon. (The train often carried large quantities of gold from the mines, hence the name). That day, the brothers believed there was a half-million dollars of gold aboard the train.
As the train labored toward the summit and the entrance to Tunnel No. 13, twin brothers Ray and Roy (both 23 at the time of the crime) and their teenage brother Hugh easily hopped aboard. The train entered the tunnel and the D’Autremont brothers blasted the mail car with explosives they stole from a construction site in northern Oregon. Unfortunately for them, the blast wedged the train inside the tunnel, making it impossible for them to remove the loot.

After killing several men, the brothers fled to the woods empty handed. A massive manhunt that included the federal government, Oregon National Guard troops, local posses, and angry railroad workers ensued, but it wouldn’t be until 1927 that Hugh was caught while serving in the Far East in the military. The twins were arrested a few months later in Ohio after renewed interest in the crime led to the recirculation of most wanted posters across the Nation.