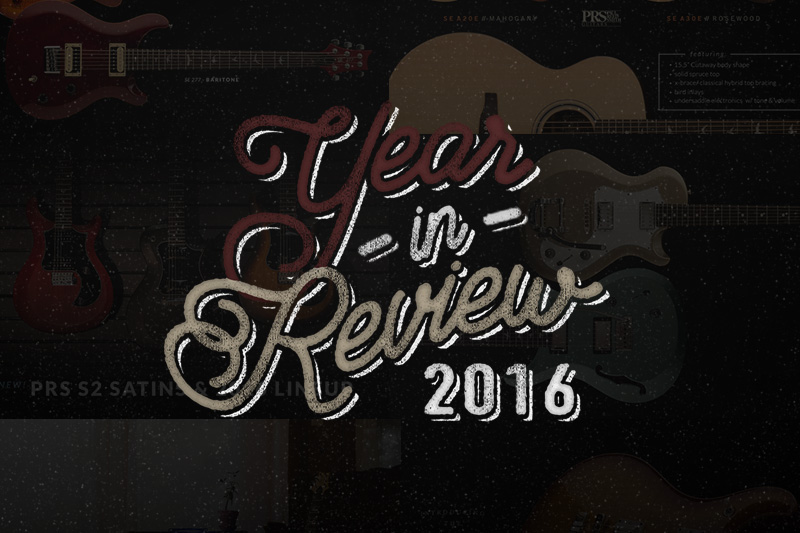 2016, what a year! Dozens of great PRS events around the world, countless relationships with new artists, and a big list of new product releases to help you find your musical voice. Join us for a look back at our product releases over the past year!

First, we released a pair of 27.7" scale length baritones, the SE 277 and SE 277 Semi-Hollow. The model names come from the 27.7” scale length, perfect for a well-balanced and comfortable string tension on the lower tunings. These baritones come tuned B to B and give you a whole new range of notes to play with. We love them so much that we came up with a list of 5 Reasons You Need One! If you've never tried a baritone before, these are extremely fun to play, trust us. 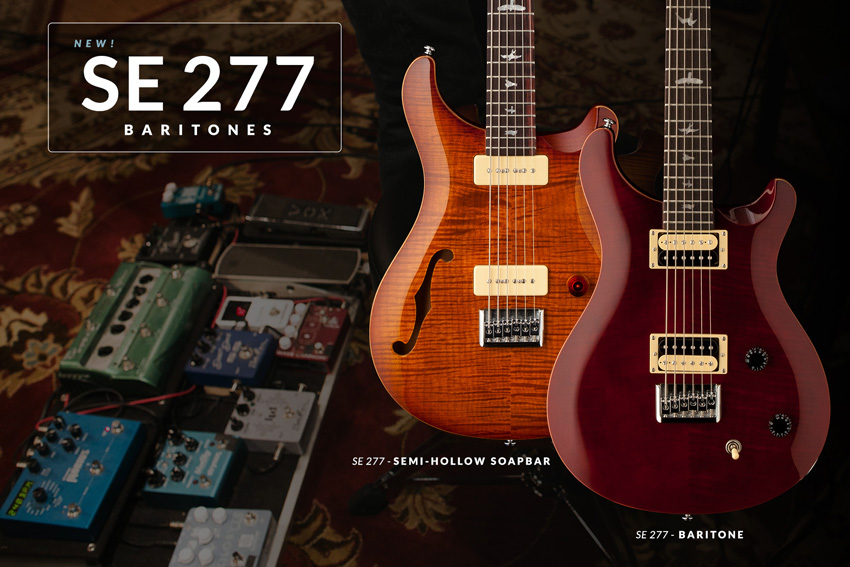 Next up, we added two new acoustics to our SE acoustic lineup, the A20E & A30E. These models offer desirable sitka-spruce tops, one with a mahogany back (the A20E) and the other with a rosewood back (the A30E). You can get the full scoop on the SE acoustic family here! 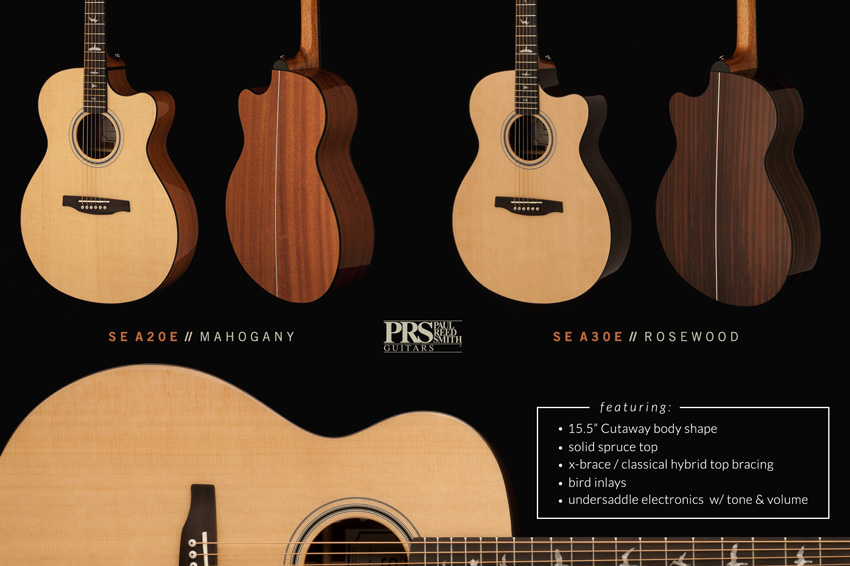 After extensive research and development with Periphery's Mark Holcomb, we introduced the SE Mark Holcomb, an articulate & aggressive instrument featuring Mark's signature Seymour-Duncan USA pickups. This guitar is built with unique specs in order to cater to heavy playing, but has the ability to become surprisingly sweet and clean. Mark says it best, so check out our interview with him about this model. 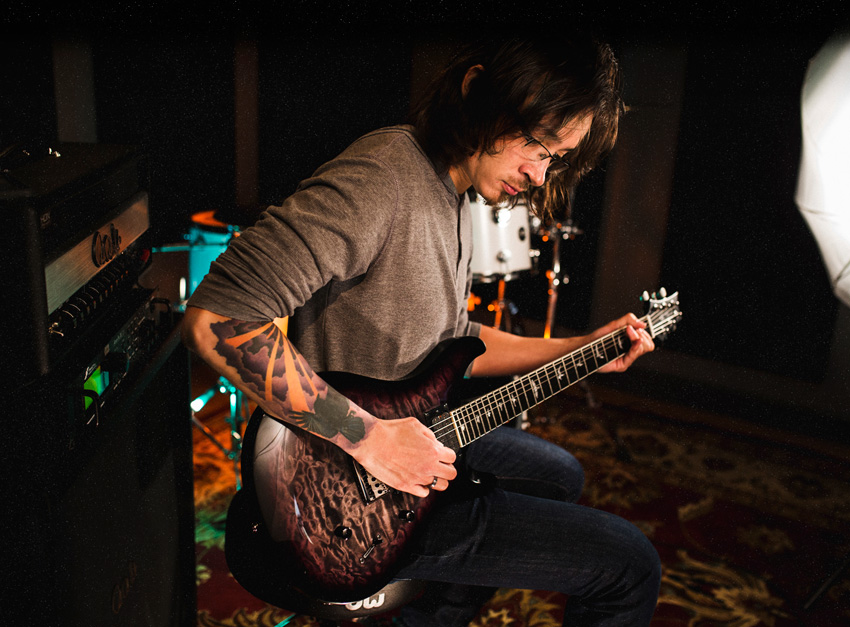 Moving along to our S2 line, 2016 saw the introduction of the "Satins," a trio of our mahogany S2 Standard models (the Singlecut, 24, & 22) now offered in comfortable and beautiful satin finishes. Also, starting at $999 in the US, these models are the most affordable entry into our USA S2 line. We say "you have to feel it to believe it" because they really are that addicting to play! Check out this blog post to hear some demos! 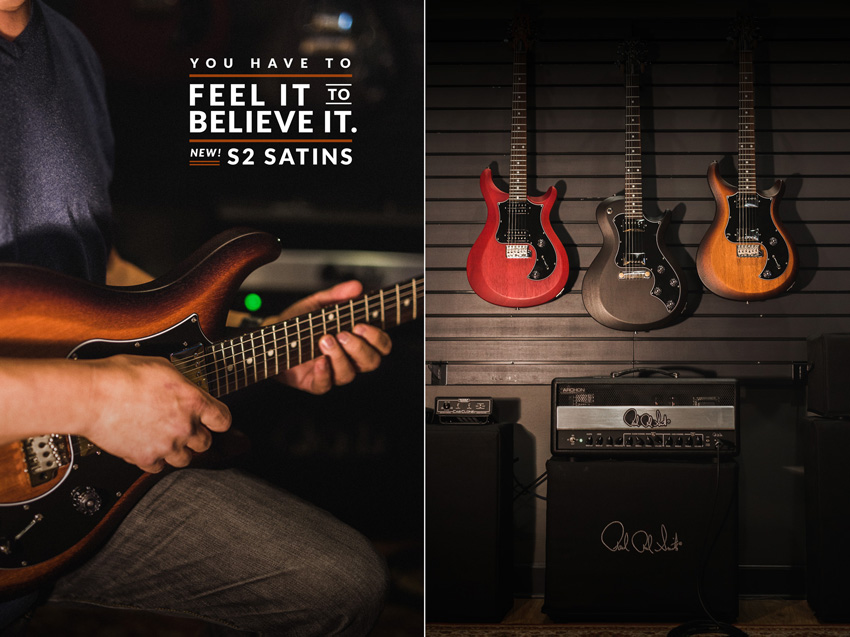 New models, aren't the only thing we added to S2! In the Spring, we began offering two new metallic finishes on all of our mahogany-body S2 guitars. These striking new finishes will certainly catch the audience's attention. We wrote a blog on the process to create these finishes, but the question is, which one do you choose? 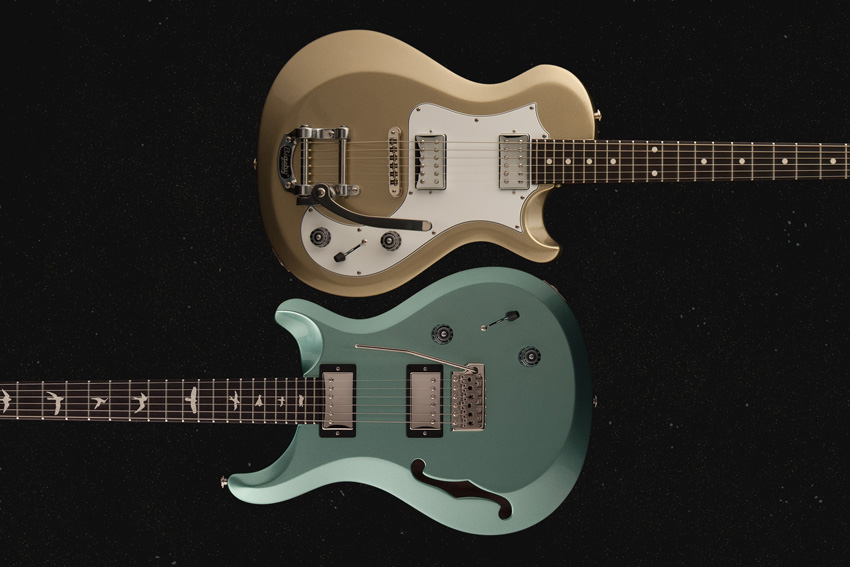 Well, technically this product category didn't exist last year, but, we're proud to say that it's back! Originally introduced in 1988, the CE24 was discontinued for a few years before it's resurrection in early 2016. Bolt-on guitars have been a staple in rock and roll for decades, and the CE24 rejoined the party with some updates.

Paul Reed Smith mentioned, "After 30 years of guitar making, we’ve learned a lot, and we have used all that knowledge to update our original CE bolt-on model. Most notably we updated its sound by adding our new 85/15 pickups which have more musical high end than the original “HFS” pickups, and we also made it slimmer so it is very comfortable to play.” See the CE24 up-close here.

Give it a listen below!

But wait, there's more! Later in 2016, we announced a limited order window on an all-mahogany satin version of this increasingly popular CE24. It's name - the CE24 Standard Satin. The order window is now closed, but if you act fast, you can probably still find one out there!

The folks here at PRS were pretty excited with this 2016 core line update, we introduced the McCarty 594, an instrument modeled after the highly coveted vintage sounds of yesteryear, but with the reliability of our modern day manufacturing.

John Mayer even chimed in on this model, "The 594 is the best new guitar I've played in years. It has a vintage heart and soul but without the technical limitations that usually come along with an old instrument. What good is an old guitar if you can't get all that feel out of the upper frets, or the intonation is off? To hear that old PAF sound but be able to articulate the notes in a way that only modern manufacturing could allow is so exciting."

Learn all about the McCarty 594 and it's new 2017 lineup companion the Singlecut McCarty 594 in this blog post! 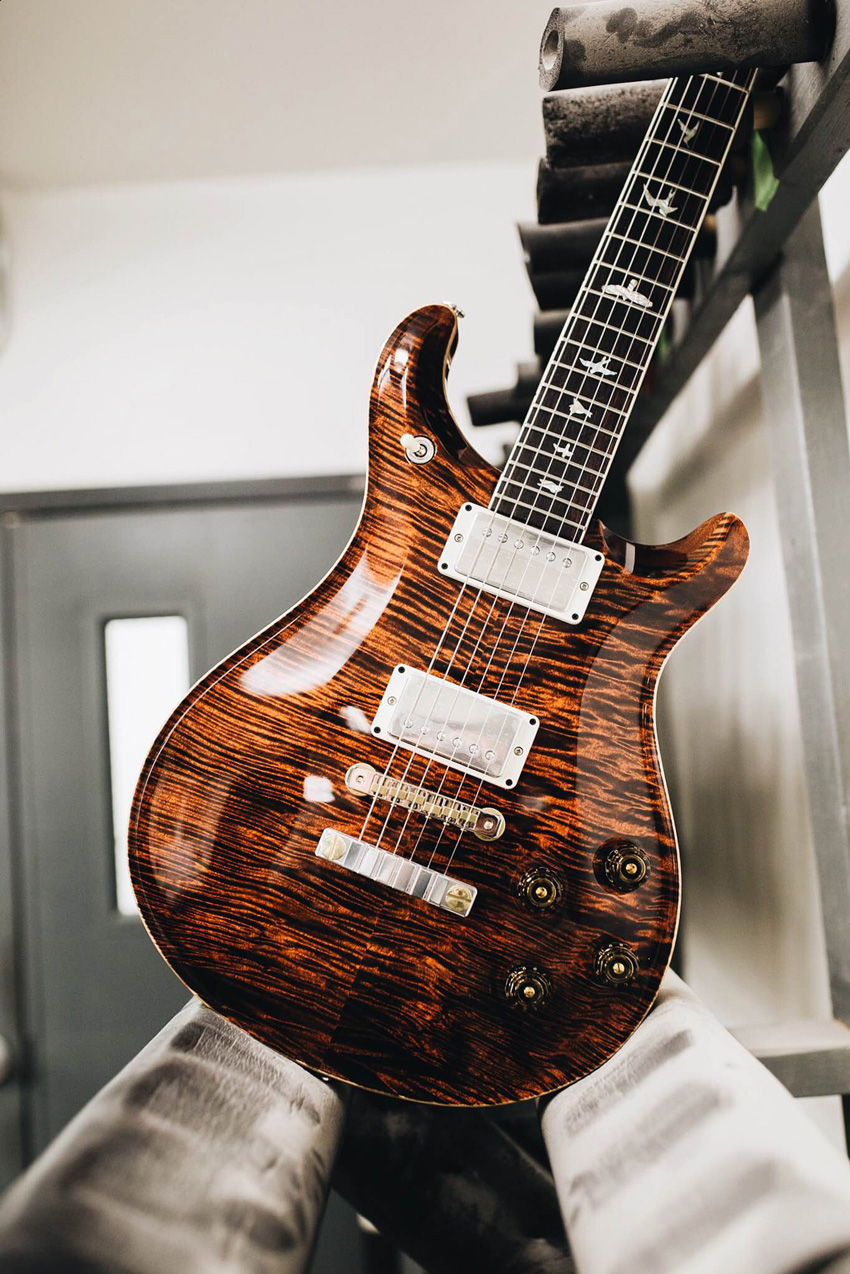 We've seen a lot of new gear thus far, but no product line comes close to offering the magnitude of new and unique models introduced by our Private Stock team in 2016. If you haven't heard, 2016 was the 20th anniversary year of Private Stock.

In 1996 when Private Stock was just starting out, a small team was selected to build one-off custom instruments using our company's most prized materials. These instruments were released as a "Guitar Of The Month" program. To celebrate Private Stock's 20th anniversary, we brought this program back for 2016. 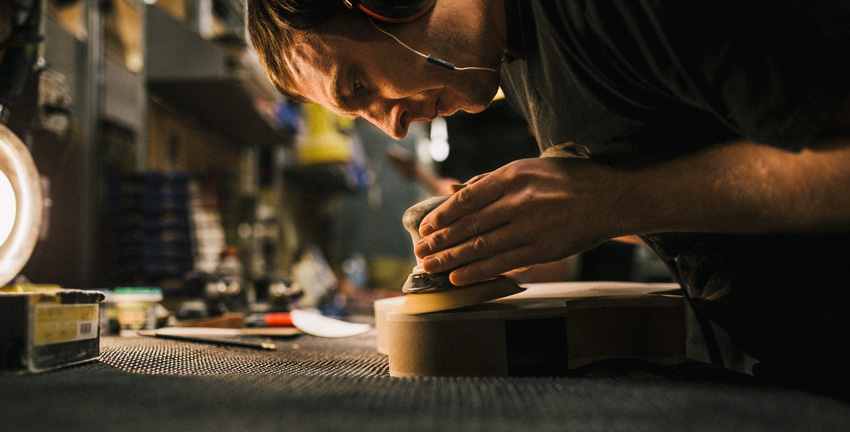 Throughout the course of the year, the Private Stock team released 12 unique models (one for each month) in varying quantities.

We wrapped em' all up in one blog post for you to check out.

In a 40-piece limited edition release, Private Stock also introduced a 20th Anniversary Model. Paul Reed Smith hand selected the maple tops for this run and mentioned that the woods were among the best the company had ever received. Check out the model specs here. 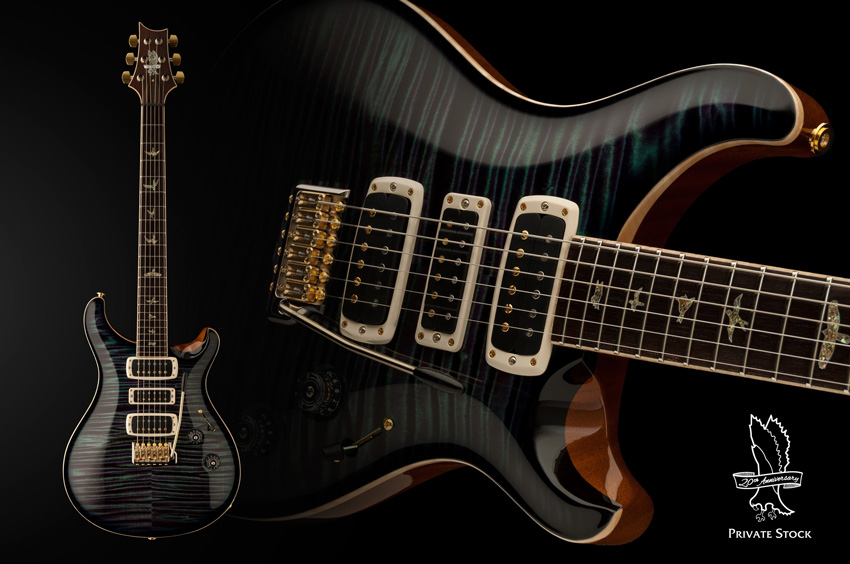 Check out what John has to say about this model in the video below:

Earlier in 2016, Private Stock introduced the Singlecut Archtop as a robust and articulate jazz box. Paul Reed Smith was heavily involved in the body design, bracing, and construction of this new model. In a two-part series we filmed in Washington D.C, Paul sits down with two talented jazz musicians and communicates the passion and philosophies behind this new model, check out the videos here!

To see the full specs, visit the model page! 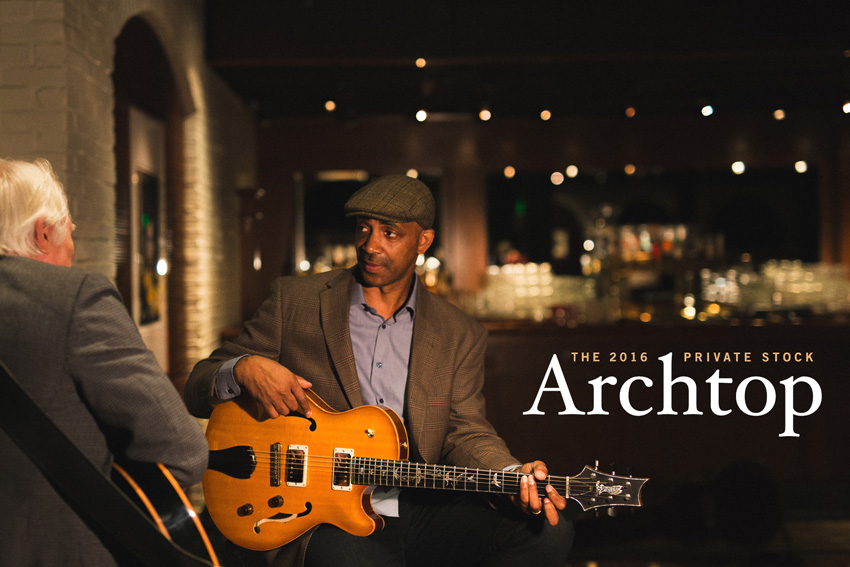 That wraps up our long 2016 model year! If you're a forward-looking individual, make sure to check out our recently released 2017 model lineup!