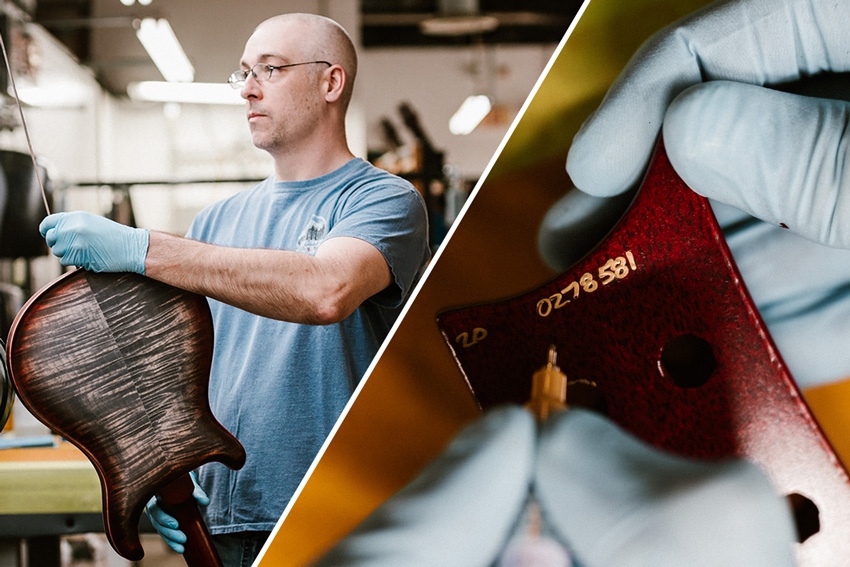 In 2002, Jordan Hoyt’s love for guitars and a desire to work with his hands led him to a job at PRS. Today Jordan is one of the two 'scrapers' in our Finish Hall. With exceptionally steady hands, Jordan is responsible for scraping stray paint off of our bindings. His smooth-handed skills continue with his other main job responsibility: hand-writing the serial numbers on the back of our headstocks!

Before Jordan became a master of the blade (X-Acto blade that is), he started his PRS career as a body sander and later worked his way towards the neck / body assembly team. His skill there soon landed him in our of our many quality control roles within the factory.

In his free time, Jordan enjoys playing the guitar, hanging with his friends and family, skiing, and hiking.

JH: Like a lot of jobs at PRS, our day-to-day duties depend on the other teams we work with - It’s highly collaborative. Typically the first thing we do in the morning is hand-write serial numbers with a paint pen. We come in a hour before the sprayers so that we can have something ready for them when they come in - the sprayers put finish over the serial numbers to protect them during the life of the guitar. We’re usually here at 6:15 am which at first I thought I was going to hate it, but I actually love it just because it’s quiet.

After that task is done, we then move on to meticulously scraping excess finish / overspray off of the binding. It’s a highly detailed process but helps keep the binding looking neat and clean. Before we brought in Andrew, our second scraper / number writer, I was sometimes doing a hundred forty to a hundred fifty guitars a day by myself!

Watch Jordan in action below:

Tell us more about the serial-number process!

JH: For years we would track serial numbers line by line from a huge list, working one after the other. Today our system is more digitized and we have a sticker in the pickup cavity that tells us the serial number to write on the back of the headstock. After we write the number we have to be careful with the wet paint, every once in a while we’ll get some guitars brought back to us because the serial numbers are smeared a bit and we have to re-write them!

JH: When I got my first ‘employee guitar,’ I actually ended up getting a right-handed Santana model because of its symmetrical body shape and I would flip it upside down to play it left-handed! Lately I’ve been happy with my 15-year employee guitar, a left-handed Custom 24. That thing rocks!

Do you play in a band?

JH: I used to, but not currently! I played in a reggae band about 5 years or so. And I also played in a band called East Toast. We played shows at the Big Bats Cafe right down the street from the PRS Factory. That’s everybody’s hangout at the end of the week.

Do you have a favorite PRS model?

JH:That’s a tough one, but I have to say the Custom 24 - I was so happy with how mine turned out.

If you weren’t a guitar player, what instrument would you be playing?

JH: Another tough one, cause there’s so many. I guess I’d have to say something similar to a guitar like a Mandolin. Which would be tough because you don’t really see a lot of left-handed Mandolins!

JH: The people. Definitely. There are so many different types of people here and the majority of them are musicians. One of the many perks of working at PRS is finding new people to play music with - you eventually take your pick on what kind of genre you want to play, and if you get along with those people, then that makes it even better!