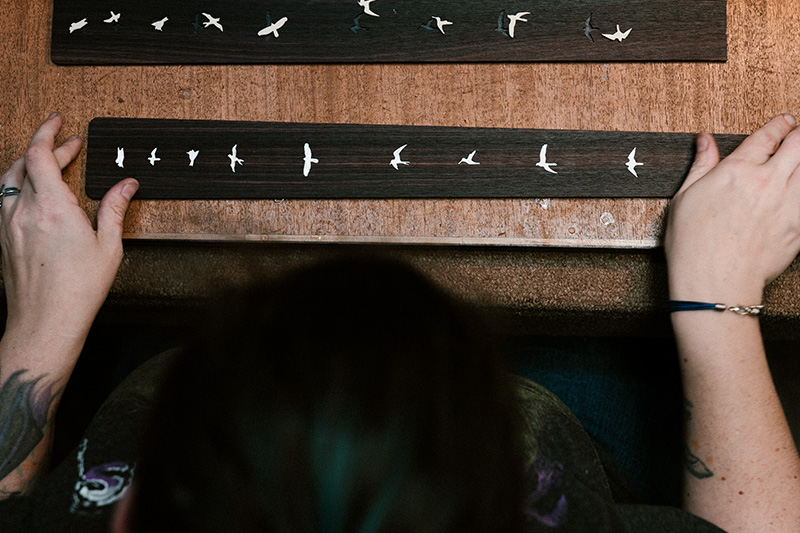 In 2017, Lindsay was looking for a change from her job as a home health aide. Her husband Jacob, a PRS employee of 13 years, suggested she apply to join team PRS. Now, almost three years later, she credits that decision as one of the best she's ever made.

First, Lindsay spent a few months as a neck sander before moving over to our inlay team where she considers herself an "inlay perfectionist" - which we think is awesome. She says her biggest joys in life are her tiny family unit, consisting of her husband Jake, and three cats: Gimli, Arwen, and Zoey.

Lindsay loves to knit, "plays the crap out of "Stardew Valley," and enjoys cooking and baking. With her extra time at home right now she is also spending time on another fun new hobby, check it out in our interview with Lindsay below! 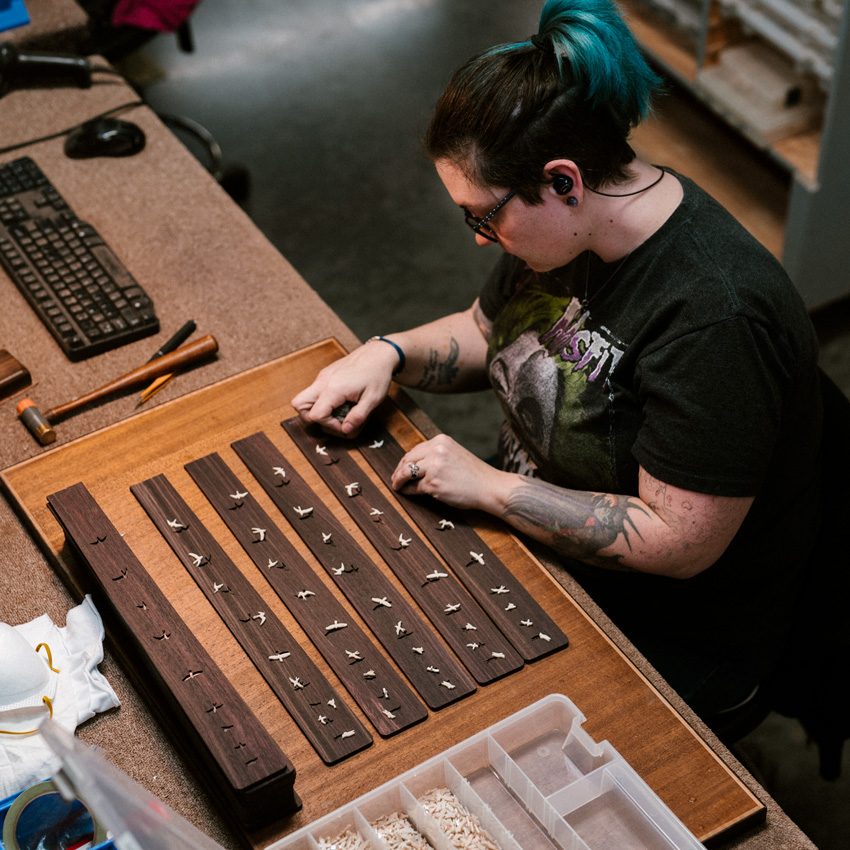 How’s life for you right now? What are you up to with your extra time at home?

LP: Life is going pretty well right now. I mean as well as can be expected due to the situation we're currently facing. I'm enjoying spending quality time with Jake and the cats but we're both ready to get back to work.

I just recently got into paint pouring, and it has done wonders for keeping me both busy and sane while in quarantine. There's honestly nothing so relaxing and cathartic right now as going out into my garage, putting on an awesome playlist, and just pouring a bunch of paint onto a canvas or a piece of scrap wood. It's like meditation but messier, haha. 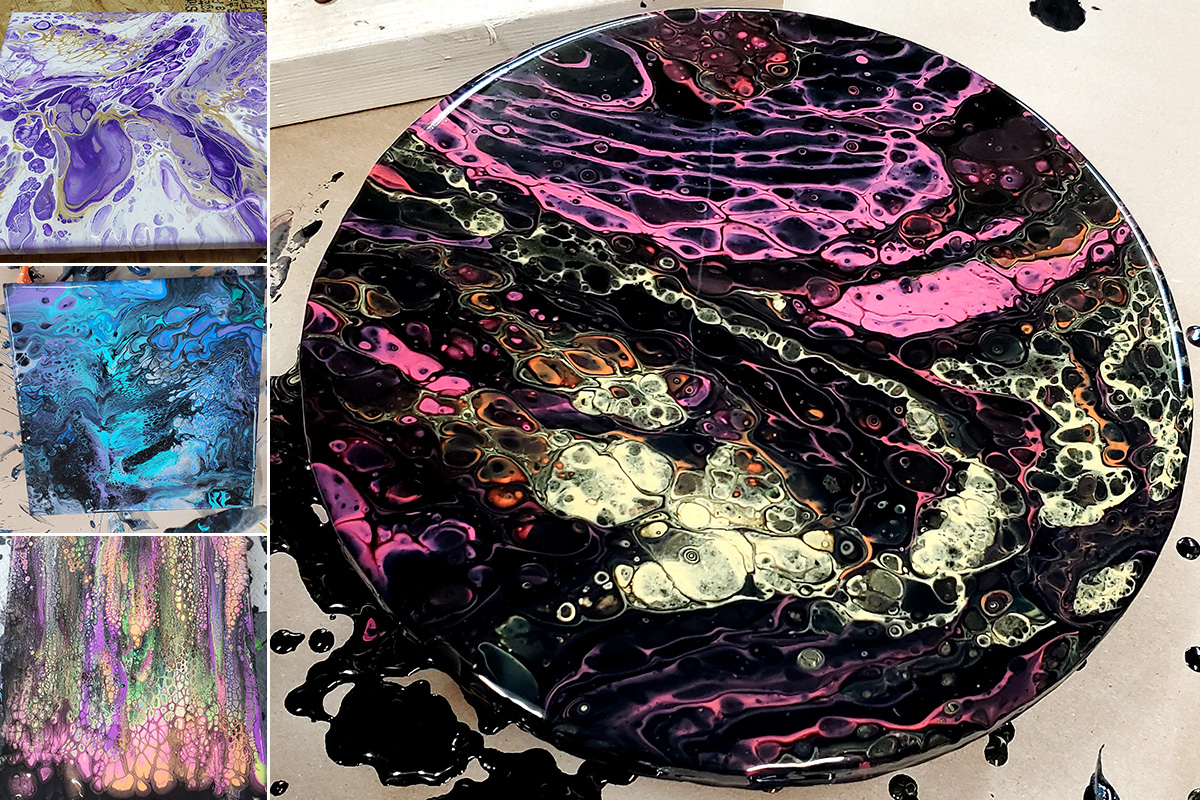 What’s a day in your life like at PRS?

LP: Let's see, a day in my life at PRS... I come in at 7 a.m., sand the dried glue off the backs of the fretboards that were inlaid the previous day, make sure everything is present and accounted for with no flaws/errors, and send them over to be sanded down. After that, I start on the boards that are on that day's schedule. Depending on the schedule, I can get between 100-120 S2 boards done if that's all I'm working on that day. Core boards, and Wood Library boards especially, are a little trickier and more slow-going because you have to put each bird together like a tiny little puzzle with super tiny super fragile pieces. I usually do around 40-50 of those on a daily or almost daily basis.

Working on the inlay team is the best, Steve and George are the two people on the team I work the closest with, and I don't think I've ever had better coworkers. They both took me under their wing when I first transitioned over from Neck Sander and became my mentors as well as my friends. It's been really weird not seeing/ talking to them every day. I hope they're doing well.

What’s your favorite inlay that we do? Do you have a favorite PRS bird?

LP: Hands down, it has to be Abalone. It's just beautiful and I love going through it and picking out the pieces that have the best cohesion for each board.

If you could change your middle name, what would you go with and why?

LP: I don't think I would change it. Anne was also my mom's middle name before she changed it to her maiden name as well my great aunt's first name, and I love having that connection to them.

Tell us about that cool cat tattoo on your bicep!

LP: It's a Maneki Neko portrait of my black cat Roxy who passed away several years ago. Maneki Neko means "beckoning cat" in Japanese and is considered a lucky charm. I liked the irony of having a black cat lucky charm with a 13 on it's collar since those are traditionally unlucky symbols, and I had it done on a Friday the 13th too! She's actually the first of 2 cat tattoos I have. I have another one on my shin that I had done last year. That one is a portrait of my cat Arwen with a quote from My Favorite Murder, which is one of my favorite podcasts. 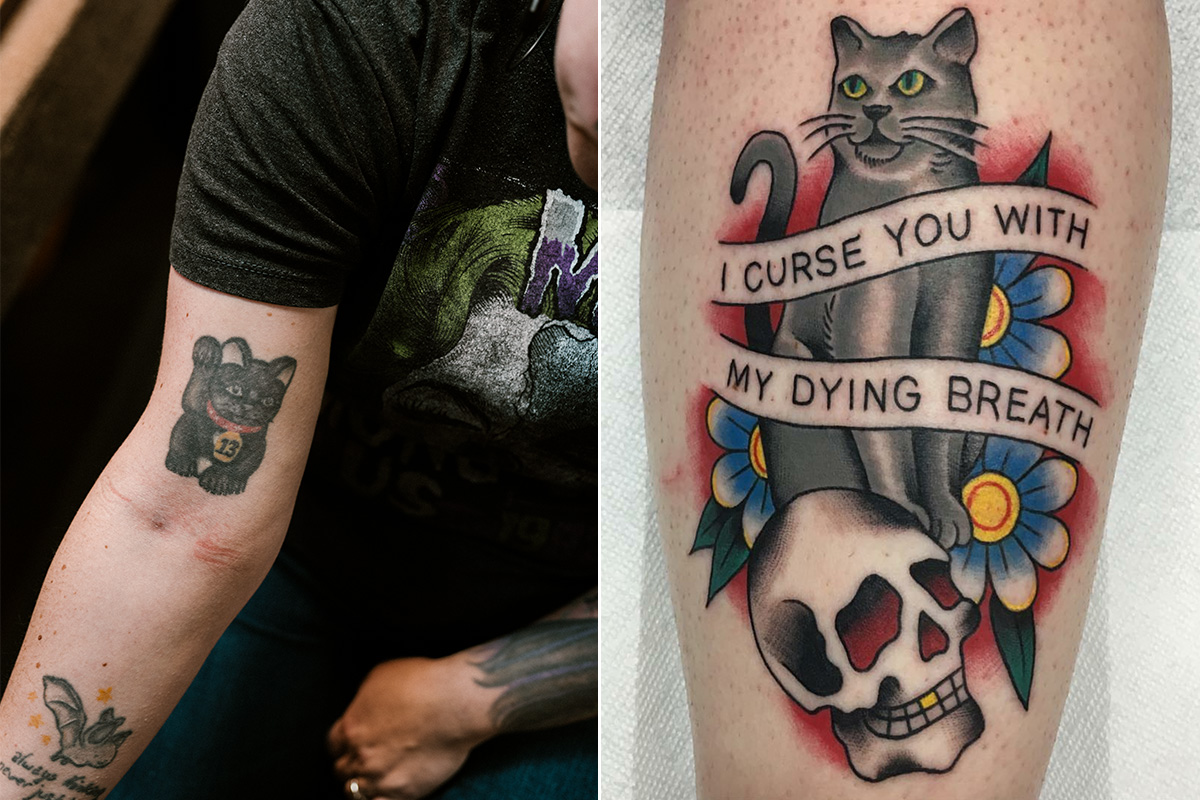 Imagine you’ve got a private jet and a long weekend, where are you going?

LP: Germany or Ireland. I've always wanted to visit Ireland, and I've been dying to go back to Germany.

What’s the most unique thing one of your co-workers may not know about you?

LP: Hmm, not many people know that when I lived in Germany as a teenager I got the opportunity to visit the castle that inspired the story of Frankenstein on Halloween one year. After the tour, the staff (all dressed up as monsters) even did the Thriller dance. That was pretty rad. 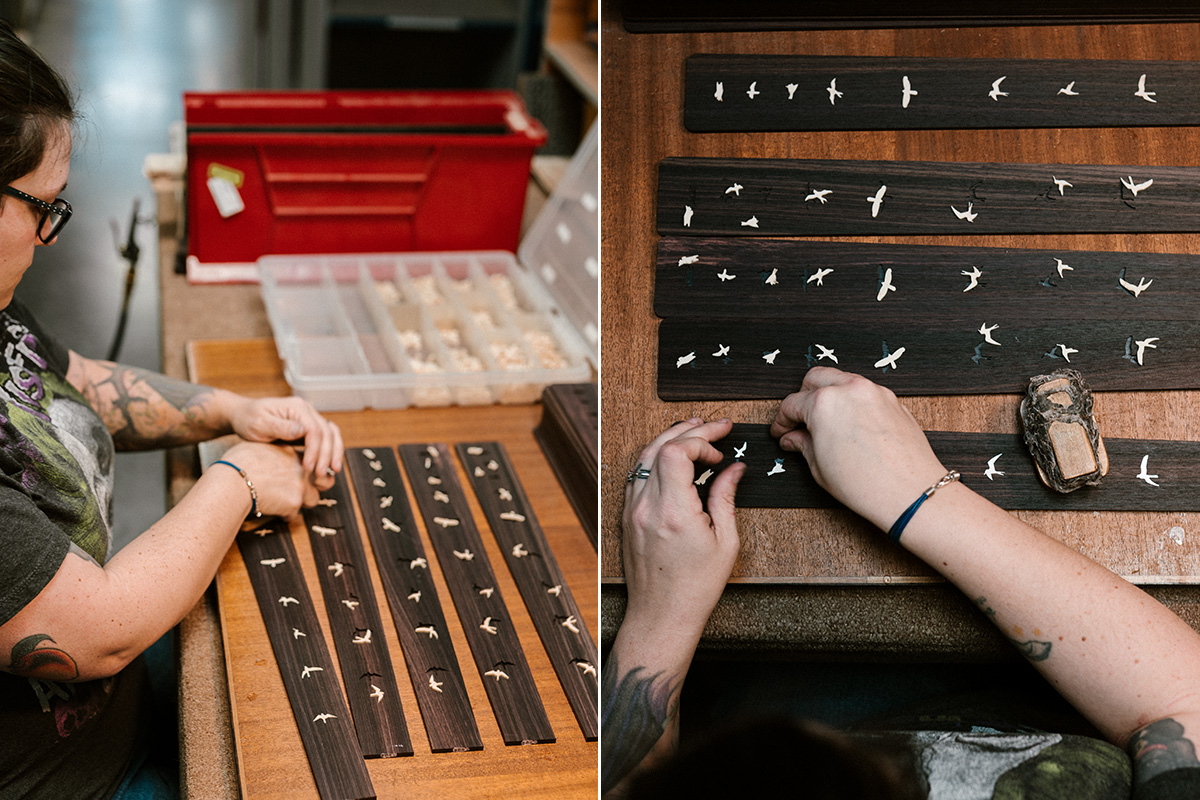 LP: I love that PRS encourages and celebrates creativity in it's employees and not just musically, though there are TONS of talented musicians who work at PRS. There are so many people here who have exceptional artistic talent whether it's painting or needlecraft or woodworking, etc., and I love that PRS nurtures those talents with fun activities like paint nights or the Employee Art Show where people can show off and sell stuff they've been working on. Creativity inspires creativity, and I feel very lucky to work with so many creative people.

Lindsay does a great job working on the bird inlays inside our factory, if you're curious about the story behind our inlays, check out this blog next.