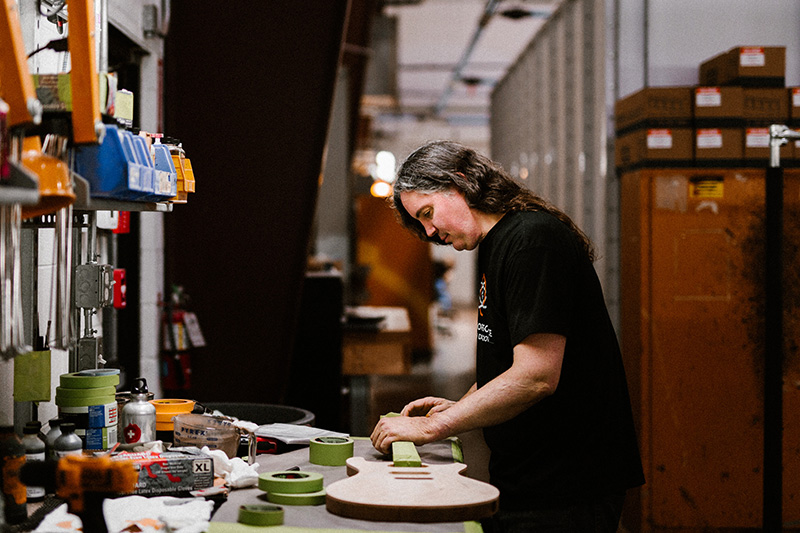 In 2003, Trampas Ferree interviewed for a position at PRS where he spent only a few short months as a guitar finish sander. He was then transitioned to the staining benches where he could finally show his true colors (ayy, get it? we'll see ourselves out).

Right off the bat, Trampas showed real skill in staining guitars and now, 14 years later, Trampas is still a treasured employee and staining each day. During his tenure, Trampas has had his hand in creating a number of PRS colors, most notably the popular PRS color “Trampas Green” which was of course named after him. He loves to eat sushi, watch live music, play guitar, write music, and play video games.

So, what PRS colors have you had you had a part in creating?

The most obvious would be Trampas Green since it has my name attached to it, but also a lot of our “fade” colors: Orange Fade, Blue Fade, Green Fade, Red Fade, Grey Black Fade. Beyond that, Aquabluex, River Blue, Black Slate, Emerald, Honey, Angry Larry, and probably a few more that I’m not remembering!

Tell us more about Trampas Green.

Around 2008, our sales team approached me about creating a few new colors, and I had the idea for this green for a while, the base stain came from charcoal, and then on top of that you put green. It looks great when it all comes together.

How long does the stain process take and how many guitars do you work through each day?

Between 15-20 guitars each day and the length of time will depend on which color it is. They all have different processes that we follow closely.

Most difficult color to stain? Easiest?

The easiest to stain are typically the yellows, McCarty Sunburst, McCarty Tobacco, simply because they just take a yellow base and we send it off topcoat where the bursts are sprayed.

My favorite model is one we actually don’t make anymore but it is the 25th Anniversary McCarty Narrowfield, we only made it for one year, but it was cool. A maple top, narrowfield pickups in the bridge and neck, and it rocks. I have one in Charcoal finish, this was before Trampas Green was invented, haha!

My current favorite color to look at is Aquableux, another color that is a pain to stain, but it makes the grain in the maple look great.

The color you would most likely see me playing on stage would be a more traditional color like Amber, Black Gold Burst, or McCarty Sunburst. 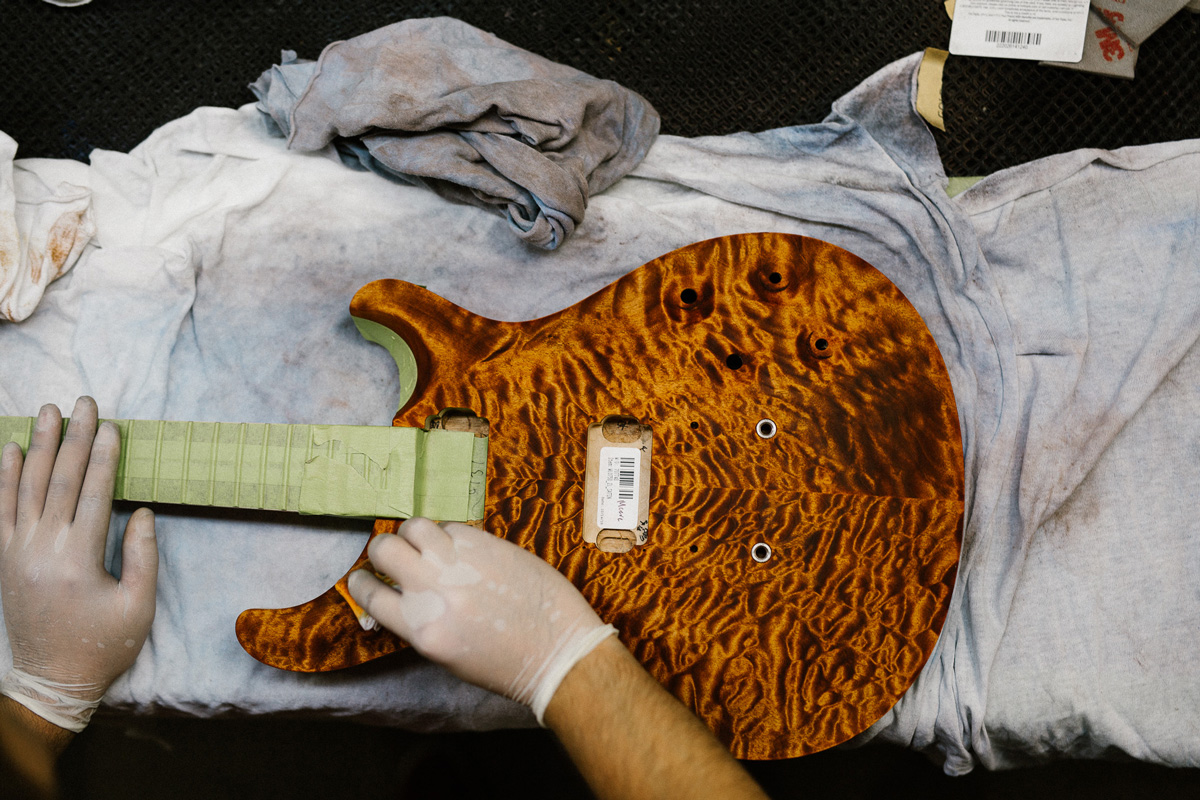 If you could travel somewhere for a month, where would you go?

Ooo, probably someplace with a hip music scene, like Chicago or New York City. I love music and try to get to shows as often as possible. If I didn’t have this job to wake up for (at 4am), I’d probably go to more shows!

I have so many favorites so I'll have to name a few: Zappa, a local Marylander by the name of Danny Gaton. He was actually on the cover of Guitar Player and the cover said “the greatest unknown guitar player.” I like David Bowie a lot too. And I need to get a soul band in here, so James Brown.

What do you love most about working in the guitar business?

I love working with my hands and being in a shop where there are a lot of other people working with their hands. PRS is almost the “ideal” vision of a factory, we’re not in big suits working around automated machines all day, we’re walking around using our hands. Every stain job we’ve done is completely done by hand and I'm proud of that.

When I first interviewed for this job in 2003, I was a guitar player but was shocked at just how much detail went into guitar making. It's cool to be a part of it.

Check out the PRS Product Pages to see more of the great colors Trampas and our other finish employees work on each day!