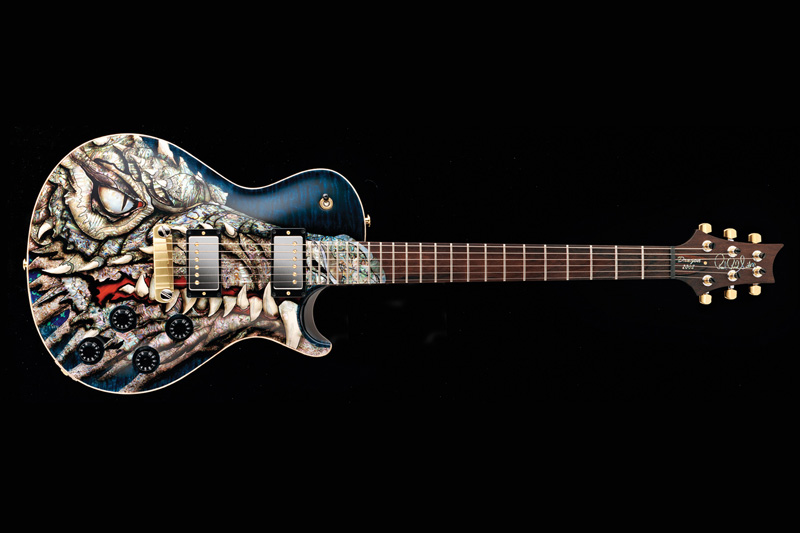 This never-before-seen special exhibition showcases more than thirty exquisite instruments, including one of every PRS Dragon made including two Dragon guitars from our own archives, Paul Reed Smith’s personal “1st Dragon” which he made in 1979 and six Dragons from Larry Sifel’s private collection. Each Dragon celebrates in intricate detail the creative union of Pearl Works’ inlay expertise with the craftsmanship of PRS Guitars. 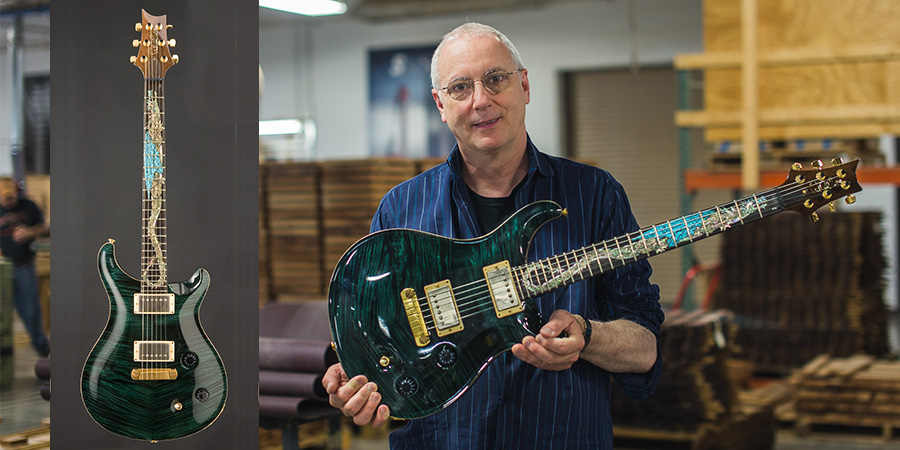 The mutual respect and appreciation between Paul Reed Smith and Larry Sifel ran deep as did their drive to push their crafts to outer limits while creating highly decorated instruments. When asked about Larry’s influence, Paul responded,

“Larry Sifel was a visionary in the music industry. I remember very clearly the day he came to our factory, took me to lunch, and carefully explained that he was going to take inlay into the 21st century. There was a lot of detail to his plan, but at its core was the intention for inlay to be cut by a CNC machine instead of by hand. I said, “OK, I’m in,” and we started business with him. It played out almost exactly as he envisioned, and there’s not a month that goes by that we don’t take for granted something he did.”

“The exhibition is a celebration of contemporary guitar inlay and the talented artists who make it possible. That story simply isn’t complete without highlighting PRS Guitars and the stunning instruments they have created over the years. We are honored that Paul Reed Smith and his team have opened up their insights, memories, and archive of historic guitars to help MIM create this unforgettable experience for our museum guests,” said Richard D. Walter, PhD, MIM’s Curator for United States & Canada

MIM is the only location in the world hosting this exhibition and is the only exhibit in history that features all of the PRS Dragons.

Read below to learn the story behind each of the PRS Dragon guitars!

As a 16 year old, Paul Smith had a dream about a guitar with a dragon inlaid down the neck. For 20 years, Paul bounced the idea around in his head but the technology limitations at the time made it impossible for him to design the Dragon as he envisioned.

Fast forward to 1992, PRS Guitars is a growing business – we’re only 7 years old when Paul hears that the technology becomes available to inlay a complicated design with laser sharp precision. Excitedly, he gets to work building what will be known as “Dragon I.”

Throughout our company’s 31 year history, we have built many quality instruments. Some, however, get remembered more than others. Below we look back at each of the PRS Dragon guitars - a dream turned into a reality.

The 201-piece abalone dragon inlay was not the only thing that set this guitar apart from others in the PRS product line. For the first time in the company’s history, the Dragon I came with a 22 fret neck, a newly designed PRS stop-tail bridge, and dragon pickups. With a limited quantity of 50 and a list price of $8,000 in 1992, the Dragon I became an instant collector’s item. The first prototype is held in the PRS archives at our Maryland factory.

The next year in 1993, Paul began working on the “Dragon II.” Similar to the Dragon I, PRS utilized Pearl Works to develop an even more complicated dragon design. In addition, the typical abalone headstock design featuring Paul’s signature was inlayed in gold.

The Dragon III, similar to the Dragon II also contained gold - lots of gold. Larry Sifel of Pearl Works was building the Dragon III’s intricate neck inlay and recalls receiving the materials from the suppliers. “We had a truck that would come by every Thursday for months on end to deliver $4,000 worth of gold each time. They’d ask, ‘What are you guys doing?’”

The Dragon III was built in 1994 and the inlay was comprised of some very tiny pieces of material, some as small as a pin-head. The Dragon III prototype is currently on display with the National Guitar Museum’s traveling exhibition.

After the Dragon III, we took a 6 year hiatus from building the now world-renowned Dragon guitars. The time off culminated in the release of what many considered to be the most outrageous design devised yet - the Dragon 2000.

Instead of a neck inlay, the Dragon was inlayed on the lower bout of the guitar’s body - a challenging task considering the depth of our PRS body carve. PRS released the Dragon at the NAMM show in 2000.

Before the Dragon 2002 was released, we had been prototyping and developing a single cut body shape. In 2002, for the first time, the Dragon line of guitars featured this new single cut body. With over 90% of the guitar’s top inlayed with material, the Dragon 2002 was our heaviest guitar to date. The design used for this guitar provided a close up view of a dragon - a fierce looking eye, snarling teeth, and a snout that extended onto the upper frets.

In 2005, we celebrated PRS’s 20th Anniversary in a big way - the release of the 20th Anniversary Double Neck Dragon. With a whopping 863 pieces of shell, stone, metal, and wood — the guitar displayed two dragons on the body, each with tails extending onto the necks. “20th” was inlayed on the truss rod cover commemorating the anniversary.

After a 5-year gap from the previous Dragon model, we released our seventh run of Dragons in 2010 for PRS’s 25th Anniversary. The guitar featured a familiar Santana body shape with an intricate dragon inlay covering most of the 24-fret neck and extending onto the truss-rod cover. The Dragon’s elaborate fretboard work is more complex than its predecessors and provides an intimate view of a snarling dragon.

Our 30th Anniversary was celebrated with the 30th Anniversary Private Stock Dragon - the 8th Dragon guitar to date. The guitar features an elaborate dragon inlay designed by Jeff Easley, a fantasy artist famous for some of Dungeons & Dragons rulebook covers. Aulson Inlay deconstructed Easley’s artwork and recreated it into several distinctive sections that have been embedded into the body of the guitar and conclude with the dragon’s tail whipping up the fretboard.

The Private Stock 30th Anniversary Dragon nods toward our history with a “pre-factory” style carved top and a pre-factory style Pattern Regular neck. The extraordinary Private Stock grade tone woods were hand selected for this very limited series and are accompanied by the newly introduced 85/15 treble and bass pickups.

The Dragons and Vines exhibition will be on display in MIM’s Target Gallery from November 5, 2016, through September 4, 2017. Information about supplemental programing will be announced in the coming months.

Admission: $10 for Dragons and Vines: Inlaid Guitar Masterpieces exhibition only, $7 when purchased with general museum admission.