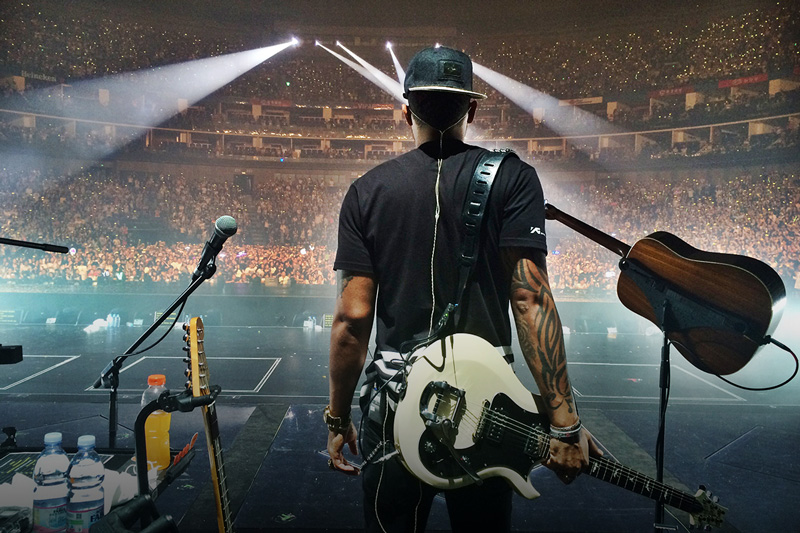 Having played the guitar since the age of five, passion for music started early. Lyons sites that growing up in church provided the perfect platform that cultivated his skill. At the age of 11 he did his first studio recording with the choir, Voices of Praise. The song was entitled “D.I.A.L B.I.G” from there, his musical growth enhanced tremendously. Lyons began playing for the Korean “Kpop” boy band “Big Bang” in 2012, as their lead guitarist. They have since, traveled the world on consistent world tours, selling out arenas worldwide. Finishing the Big Bang tour early 2014, Lyons was asked to return to the Korean opportunity again, but not just as the lead guitarist, but as the assistant musical director for Korean “ Kpop” girl band “2NE1”. --

PRS: How did you start playing music/guitar? JL: I starting playing music actually from being born into a music family and grew up in church. I watched my dad play guitar as a young child and that's where my love began. My mom bought me my first guitar and she stayed dedicated to fulfilling my desire with music. And because of my family’s prayers, God taught and blessed me to play. PRS: Tell us about some of your musical influences? JL: My musical influences range from Jazz to rock. My favorite jazz players are Norman brown, George Benson and Joe Pass. My blues love and influence is the late, great B.B. King, who actually influenced a lot of my church playing. For soul and texture during the approach of guitar playing, a person that has a distinct feel when I listen, both singing and playing, is John Mayer. And for rock, I would say Jimi Hendrix, Steve Vai, Slash and Lenny Kravitz just to name a few. Last, but certainly not least, the person I feel covers all genres in my influential world, is Prince. Coming from his style to his playing, he's really influenced me. I love prince’ showmanship and the way he draws you in, makes me forget where I am. From both Jimi and Prince, I’ve learned that its way more than just strumming the guitar when performing for thousands of people. They’ve mastered the key ingredient to Entertaining. I’ve taken all those notes and always look forward to walking on stage because of each of these greats. So I want to say thank you. Not sure if I’d ever be able to personally say thanks, but I’m saying it here, now in hopes it reaches them. 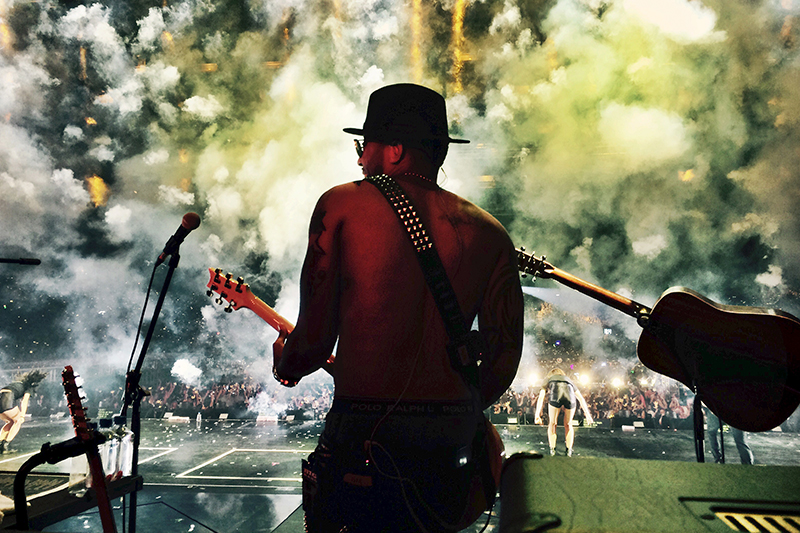 PRS: How did you get your nickname “Guitar Slayer”? JL: Back in 2008, I had my own band named K'nnect 4 and during my solo time I would always lie down on the floor, crawl on my knees and a few times drop my guitar mid solo and walk off stage. And there were always fun moments and a lot of work for us all. One day over drinks and goofing off I had given all the band members stage names for fun. And my keyboardist at the time and good friend, Caleb McCampbell felt like I was a slayer to the guitar and then named me Guitar Slayer and it kinda stuck. PRS: In 2012, you began playing for Big Bang as their lead guitarist. Was this Korean opportunity a big adjustment for you? JL: Correct 2012 was the beginning of my life’s change. Let me just say it was very unexpected. This gig opportunity came from a little Twitter message that I replied to with thoughts of it not even being seen or responded to. And just like that, overnight BOOM. LIFE CHANGE. So yes, because I had to readjust my life completely. I left jobs I already had lined up and had to deal with and still dealing with being away from my family. The upside is, I'm able to play for and inspire the entire world through music, other than just the U.S. of A, and I’m honored and blessed. Shout out to Gil Smith II! Gil Smith II is my music director and a very well respected one at that, and he saw something in me both personally and musically and I’m forever grateful.

PRS: How did you discover PRS Guitars and what made you want to become a PRS endorser? JL: I discovered PRS from two ways. Seeing Santana in a music video once, and the other, hanging around Guitar Center like every day. What first intrigued me about PRS, before ever playing one were their bold, outright, dramatic, beautiful detailed artwork choices and body shape. Very sleek, very sexy, and very different than any other company out there. And once I actually played one, I think the guitar and my hands became married. It left me in disbelief. What made me want to be a PRS endorser was, I want to spread the word on not only a great product but great AR people. The artist relations are everything. I have to give a huge thank you and shout out to Winn Krozack. Had it not been for him actually taking out, not a minute, but a few hours to talk to me. He had no clue of my being, my name, my history of work. But he genuinely invited me in and we talked about the product for hours and that made me feel at home. How would you not want to be behind a company who hires great genuine people like Winn to care about us and ensures us that we’re taken care of? PRS: You’ve got quite a variety of PRS guitars in your rig… is there one model in particular that you would call your “go to guitar”? Why? JL: At the moment my go to guitar is the Starla. Being able to enjoy both the single coil and double coil greatness is amazing to me. Not to mention I’m a die-hard humbucker fan. Having this solid body guitar makes my every move feel very secure. Whether it’s the security in holding the guitar or the security in how my hands feel on the neck of the guitar. And adding the Bigsby light tremolo effect is like adding candy. PRS: Do you have any hobbies that you enjoy when you’re not singing or playing the guitar? JL: My hobbies are simple. Of course I love my family and spending time watching the price is right with my grandfather. But I love all forms of art, and the one that captivates me most at this moment, is photography. I’m excited about my new Canon 6D camera and I can’t wait to capture more great photos of my life’s journey across the world, rocking my PRS. Connect With Justin Instagram Facebook Twitter
← Back To Blog