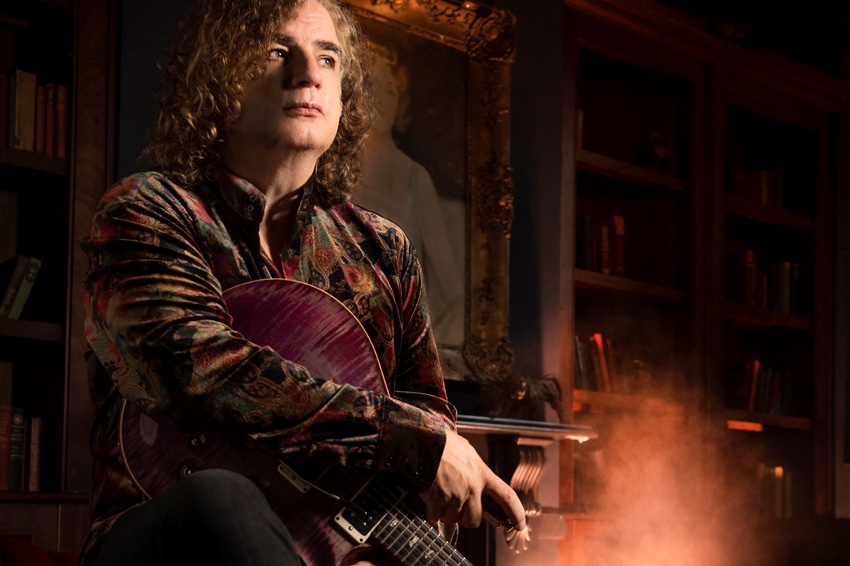 Jakko Jakszyk (King Crimson), announced the release of his forthcoming solo album, Secrets & Lies due out on October 23, 2020. In August Jakko released the albums' first single, "The Trouble With Angels," accompanied by an animated video by Iranian filmmaker Sam Chegini, created in the midst of the Coronavirus pandemic.

Watch the music video for the "The Trouble With Angels" below:

PRS: It has been some time since your last solo release, The Bruised Romantic Glee Club in 2009. Are the songs on Secrets & Lies based on material that has evolved over the years since, or was this album written all at once?

JJ: A bit of both. 3 of the songs are things I wrote with Robert Fripp for King Crimson that didn’t make it to rehearsals. A couple I’d started a year or so back and then some new pieces. But on the whole I recorded them all in the past year.

PRS: What guitars did you use during the recording sessions for Secrets & Lies? Does your Private Stock “Schizoid” P24 appear on the new album?

JJ: I did use my Private Stock ‘Schizoid’ but mostly it was the PRS Custom 24 Violet Flame, which has the exact same spec as the ‘Schizoid’ with the piezo in the bridge.

Also my Fire Red Custom 24. The acoustic on the album is my SE T50E Tonare.

PRS: The first single from the new album, The Trouble with Angels was released with a hauntingly beautiful video that really reflects the tone of the song. Tell us a little about how that video was filmed and animated.

JJ: The video, directed by Iranian filmmaker Sam Chegini, was created despite a maelstrom of worldwide political upheavals including the killing of Iranian General Quassem Suleimani

Having spoken at length to Sam Chegini about this video: approach, references & style etc... Sam seemingly disappeared. I couldn’t get hold of him, and he wasn’t answering my emails. A week or so later I received a call from a friend of his who apologised on Sam’s behalf.

He explained that as Donald Trump had unilaterally pulled out of The Iranian Nuclear deal, and had imposed further sanctions on the country, that there been protests on the street as the lives of ordinary Iranians became much worse. As a result, The Iranian Government turned the internet off.

Sam managed to get a call to me a week later. He asked me to write to him in an official capacity so he could obtain a visa, as he needed to travel to England in order to shoot me against green screen, which he could then turn into animation. I did this, and posted it to him. Nothing.

Eventually, on Christmas Day, I received an email from Sam. The internet was back on. However the government had now banned people from traveling to the UK and the US. Sam told me that he could still get a visa for The Netherlands, but if I was prepared to travel we could film in Turkey, as he didn’t require a visa to go there. So I duly found a green screen studio in Istanbul, a hotel and flights. I booked and paid for them all.

24 hours later Donald Trump sanctioned the assassination of the Iranian General Quassem Suleimani. Subsequent UK government advice was to avoid the area. Then a day later the Iranians accidentally blew a passenger jet out of the sky during a relation strike. Sam wrote to say that all flights from Tehran airport had been cancelled. So...

In the end I booked a green screen studio in West London. Toby Amies (who has directed the yet to be released King Crimson documentary) helped out as camera man. I had my iPhone on Sykpe to Sam, and this was clamped to the camera, pointing at the monitor. Meanwhile Toby was taking direction from Sam via blue tooth headphones from Sam’s studio in Tehran, as we followed his lovely shooting script!

Things in Iran got much worse. Supplies and food were already in short supply, and then the Covid virus hit. And did so badly in Iran. In order to film the crowd shots and the girl in the video, Sam could no longer shoot these in Iran due to strict lock down. So those things were shot (again remotely) in the Netherlands and Turkey before the lock down hit them.

Sam battled through failing equipment and power cuts amidst the hard hit pandemic to complete it. The video looks amazing, but what’s most amazing is that we managed to make it at all.

PRS: King Crimson had just wrapped up their 50th anniversary world tour last year prior to the COVID lockdowns, has the band been active at all during this extended period away from the road?

JJ: No. We were meant to come back to the States in June and July this year, following the success of last year's tour, but its all been postponed till the same period in 2021.

There are some releases to come though. Some live video of things we’ve done in the past year or so.

PRS: What artists or albums have you been currently listening to the most in your downtime?

JJ: Oh. I’m a big fan of a band called ‘Bobbing’ and their album Thank You For Singing To Me, always love listening to Derek Trucks, Man Alive by Everything Everything. plus loads of stuff from my youth that I play to my son.