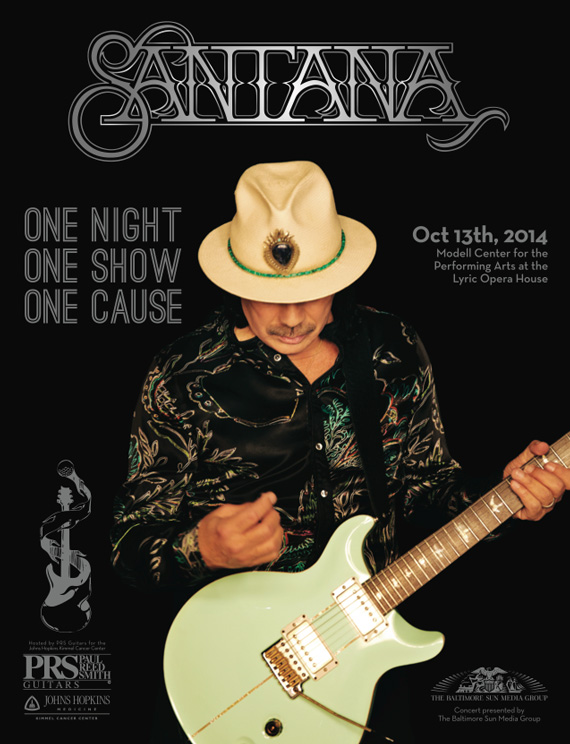 On the evening of Monday, October 13th, Paul Reed Smith Guitars will host the 15th Anniversary of the acclaimed One Night One Show One Cause Benefit Concert, presented by The Baltimore Sun Media Group for the Johns Hopkins Kimmel Cancer Center. This year’s event will take place at the Modell Center for the Performing Arts at the Lyric Opera House in Downtown Baltimore, Maryland, and will feature an exclusive performance by SANTANA. Delivered with a level of passion and soul equal to the legendary sonic charge of his guitar, the sound of Carlos Santana is one of the world's best-known musical signatures. For forty years and as many albums later, Santana has sold more than 100 million records and reached more than 100 million fans at concerts worldwide. To date, Santana has won ten GRAMMY ® Awards and three Latin GRAMMY ® Awards. He won a record-tying nine GRAMMYs for a single project for 1999’s Supernatural (including Album of the Year and Record of the Year for “Smooth”). He has also received the Billboard Century Award (1996), was ushered into the Rock and Roll Hall of Fame (1998), and received the Billboard Latin Music Awards’ Lifetime Achievement honor (2009). Among many other honors, Carlos Santana has also been cited by Rolling Stone as #15 on their list of the “100 Greatest Guitarists of All Time.” Celebrating the chart debut of Guitar Heaven (Arista) in 2010, Santana joined the ranks of the Rolling Stones as the only musical act in chart history to score at least one Top 10 album in every decade beginning with the 1960s. On December 8th, 2013 Carlos Santana was the recipient of the 2013 Kennedy Center Honors Award. He is currently headlining a multi-year residency at House of Blues at Mandalay Bay Resort in Las Vegas. He is also currently headlining at a multi-year residency at House of Blues at Mandalay Bay Resort in Las Vegas. Santana recently kicked off an 18 show US tour with Rod Stewart along with stand-alone dates for ‘The CorazónTour.’ The VIP Pre-party will include a Live Guitar auction, hosted by Jon Levinson of Alex Cooper Auctioneers and feature guitars autographed by such names as Carlos Santana and the Baltimore Ravens, catered small plates by The Classic Catering People and drinks featuring Casa Noble Tequila and American Harvest Organic Spirit. One Cause is the flagship benefit concert of PRS Guitars. Since 2000, PRS Guitars has raised over $3 million for the Living with Cancer Resource Program at the Johns Hopkins Kimmel Cancer Center. The Living with Cancer Resource Program offers supportive care programming and education to cancer patients and families at Johns Hopkins free of charge. Seats begin at $84.50. VIP tickets start at $250, $500, $1000 and include premier seating and access to the VIP Pre-party. VIP Pre-party starts at 6:00pm, doors open at 8pm. All ages show. Tickets available through Ticketmaster - on sale August 22, 2014. Here is a letter from Paul Reed Smith about the One Night, One Show, One Cause event: "For the past 14 years, our efforts to make a difference in the lives of cancer patients and their families at Johns Hopkins has been nothing short of remarkable. The Paul Reed Smith Guitars and Johns Hopkins Kimmel Cancer Center Charity Weekend has been recognized as the leading annual tradition in the region. Our event has evolved and sustained a presence rarely seen in charity events. We recognize that you are part of this success. This year our goal is to raise over $500,000 for the Living With Cancer Resource Program at Johns Hopkins. To commemorate the 15th Anniversary of this event, we are pleased to announce SANTANA as the headliner for this year’s charity Concert. We look forward to hosting you on the evening of October 13th in the unparalleled setting of the historic Lyric Opera House for a special performance by the legendary Carlos Santana and his band. Upgrade your tickets to join us at our annual VIP pre-show reception. Sip on an array of Carlos Santana’s own Casa Noble Tequila and American Harvest Organic Vodka drinks and enjoy catered small plates by the Classic Catering People. Also take part in a live Guitar Auction, hosted by Jon Levinson, with guitars autographed by the likes of Carlos Santana, Baltimore Ravens, and the 6th Annual Artist Embellished SE Guitar Auction, all for One Cause. Sponsors will also have the option to join us on Monday morning as we host our annual full field tournament at Caves Valley Golf Club in Owings Mills, MD. For 14 years, you have stood with us as we have supported patients and families during the fight of their lives. Our goal for this year is ambitious and our commitment to bring the biggest show of the year to Baltimore is unwavering. We ask you to please consider this year’s chance to make a lasting and real impact in the lives of cancer patients and their families at the Johns Hopkins Kimmel Cancer Center." Sincerely, Paul Reed Smith CLICK HERE to see the One Night, One Show, One Cause Facebook page and stay in touch with the latest news.
← Back To Blog