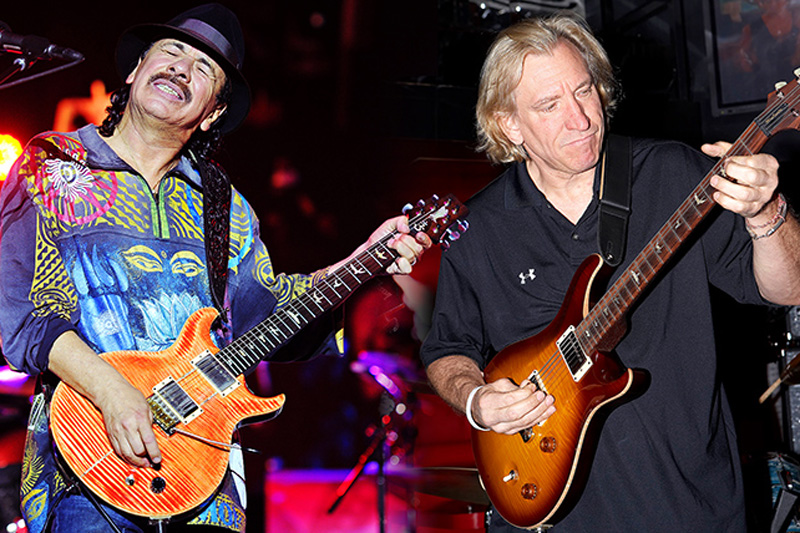 *courtesy of Vintage Guitar Magazine -- Each year, Vintage Guitar Magazine asks readers to select Readers’ Choice winners for Album of the Year, Artist of the Year, and Player of the Year in four musical categories, based on artists and recordings featured in the magazine between July 1, 2015, and June 30, 2016. Hundreds of votes are tallied via the magazine’s traditional written ballot, while hundreds more participate at VintageGuitar.com. This year PRS artist Carlos Santana beat out Joe Walsh, Mark Knopfler, Danny Gatton, and Roy Buchanan to take the trophy. 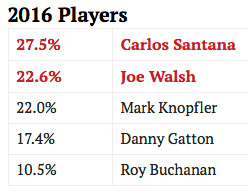 CARLOS SANTANA “I grew up in the ’60s, when the first thing you heard in music was feeling, emotion, and passion,” said Carlos Santana, discussing his Shape Shifter album in a 2012 interview with VG. “Now, that’s the first thing they take out!” That disc and its 2014 follow-up, Corazon, were Santana’s vow to raise the proverbial bar of a modern music biz that is “…so shallow we have to take it to a place where you hear a song and it gives you chills or makes you cry and laugh.” Such philosophical bits applied to music are one of the elements that have long endeared fans to the music and life of Santana. 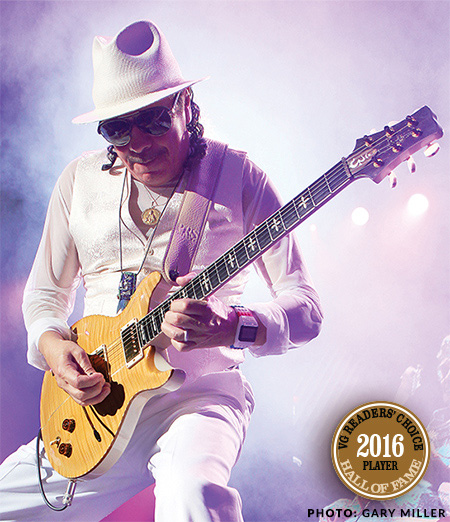 Born in Autlan de Navarro, Mexico, the music of B.B. King, Javier Bátiz, John Lee Hooker, and Gábor Szabó pushed him away from his first instrument – violin – to his true calling. In his 2006 VG interview with Dan Forte, he equated playing guitar to breathing, and cited its ability to help him convert universal energy to notes on a fretboard. Not yet a teen when his band began jamming in Tijuana strip clubs, a few years later he moved to San Francisco with his family, but returned and (at age 15) supported himself with the guitar. At 19, he re-joined his family and jumped fully into the vibrant Bay Area music scene with the Carlos Santana Blues Band. Soon, though, Carlos’ playing and the band’s increasing use of Afro-Cuban rhythms put them outside any musical mold. Dropping the blues reference, they started going by “Santana” and quickly gained an audience at the Fillmore, then famously played Woodstock a few months before releasing its first album. The band’s set, as portrayed in the 1970 documentary film, Woodstock, fully displays the exuberance of his connection with every note. Fillmore owner Bill Graham once said there were only two guitarists he could pick out among a thousand – Santana and Albert King. The late J.J. Cale called him, “the most identifiable guitarist in the world.” And though the years since have seen him experience unparalleled commercial and critical success, it hasn’t dampened his spirit or enthusiasm. Many players in Santana’s position are said to have reached their true purpose. Along the way, many experience events that reinforce that belief; Carlos jammed with Jaco Pastorius on the night the esteemed bassist died, and also recalls a recording session late one night in the summer of 2001 when word reached the studio that John Lee Hooker had died. “When I went home, [the answering machine] was blinking,” he recalled in 2012. “It was him: ‘Wh-wh-what’re doing young man? C-c-call me sometime; I wanna hear your voice.’” Santana’s makeup is further revealed in the fact that like any true hero, he doesn’t put himself on a pedestal, but continually emanates respect for those he sees as great. In this case, that’s Otis Rush, Buddy Guy, B.B./Freddie/Albert King, Jimmy Reed, John Lee Hooker, Hubert Sumlin, Jeff Beck, Eric Clapton, Jimmy Page, Peter Green, Michael Bloomfield, and others. “We all know who to go to and what to listen to so we can soak ourselves,” he told Forte. “We don’t want to sound like them, but we want to be drenched with the same things that they’re drenched with.” Varied and diverse, his discography is marked by early work with the band, later by introspective solo projects interspersed with collaborations alongside icons in many genres – blues on 1969’s The Live Adventures of Mike Bloomfield and Al Kooper, jazz with John McLaughlin (1973’s Love Devotion Surrender), classic rock covers on 2010’s Guitar Heaven: The Greatest Guitar Classics of All Time, featuring high-profile vocalists of the genre. The aforementioned commercial success came via 1999’s Supernatural (which claimed nine Grammy awards including Album Of The Year and Record Of The Year and went 25 times platinum) and the follow-up, 2002’s Shaman. Afterward, Santana began to use his profile to shed light on social causes, as on Shape Shifter, which honored Native Americans and focused on instrumentals, and Corazon, a true Latin record on which his guitar drives guest vocals on covers and new material. Santana’s touch and tone are ever-present and unmistakable. Santana has donated considerable time and energy to groups that aid the underprivileged. In 1998, he founded the Milagro Foundation to support underrepresented and vulnerable children and youth in the areas of arts, education, and health. All of the proceeds from his 2003 American tour went to Artists for New South Africa (ANSA), to help fight the AIDS pandemic, and he supports several causes including the Rainforest Action Network and Amnesty International. In late 2016, he teamed with drummer/producer Narada Michael Walden, singer/songwriter Jennifer Saran, and Ladysmith Black Mambazo on “Wake Up,” a song that appealed for the world to address inequality and impoverishment. – Ward Meeker Congratulations Carlos on winning this Readers' Choice Award!
← Back To Blog