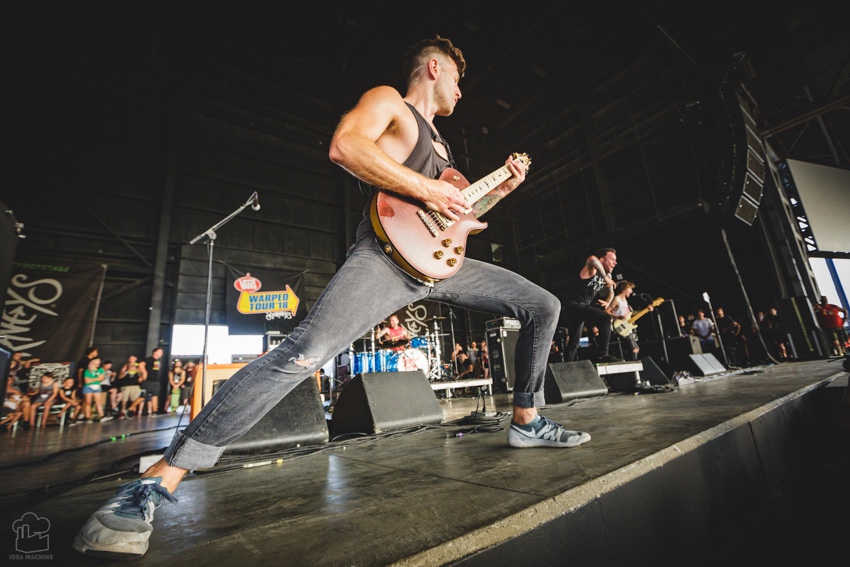 Attention Story of the Year fans! Starting Friday, October 16th the band will be kicking off the first of three special livestream concerts. The series tilted The Ghost Signals will feature the band performing their first three albums from start to finish. The first “transmission” will showcase the band’s second album In the Wake of Determination (2005). Two weeks later, Thursday October 29th the band will return to perform their third album The Black Swan (2008), followed by their debut Page Avenue on November 6th. These streams will be the first and potentially last time some of these songs are ever played live - so get your tickets now! We caught up with PRS artist and Story of the Year guitarist Ryan Phillips in a Q&A below, take a look!

PRS: You have been with us since 2002 and in that time have amassed quite a collection of PRS guitars including some special one-offs. Which stand out as your favorites?

RP: I would say that “Snake”, my fluorescent green Custom 22 is the stand-out of my arsenal, especially with our guitar playing fans. It’s one of the rare PRS guitars out there with a Floyd Rose system, and the color is just so striking. People love that guitar. I also have a beautiful custom blue SC 245 that just might be the best sounding guitar I have ever played. That guitar feels like an extension of my body, and it’s my go to for everything: writing, recording, and live performances. Any holy moly it’s gorgeous.

PRS: Story of the Year will soon be livestreaming your first three albums in their entirety. What inspired the band to revisit these records now and what was the reasoning behind not performing them in chronological order?

RP: It’s funny, 2020 was shaping up to be OUR YEAR: An incredible new management team, a new album ready to be recorded, festivals and tours lining up; we were ready to make SOTY a priority in a way we haven’t in years….And then COVID hit and laid waste to all of those plans seemingly overnight. Everything canceled. So, instead of letting it defeat us, we looked at what we did have control over and went to work: we started a podcast, got back to work writing, and put together these livestreams as a way to reach our fans across the planet and give them a little entertainment and relief from the relative bummer that is 2020. We thought our fans would dig us performing the first 3 albums because we have never played most of those songs live, especially songs from In The Wake of Determination and The Black Swan; I would say 75% of those records have never been played live before & might not ever again, so it’s going to be an especially rare performance. As far not doing them in chronological order, really the only reasoning behind that decision is the fact that our first record has such a special place in the hearts of both us and our fans it only seemed right to make it the “finale” live stream. It’s also worth mentioning that the production we’ve put together for these livestreams is AMAZING. We didn’t want to throw up a couple of static go pros and perform in a sad, empty venue. Instead we built a “bunker” with hundreds of thousands of dollars’ worth of lights and production and assembled an A-List team of directors and camera crew. Don’t miss this shit!

PRS: Will you be making any effort to use the same guitars and gear that were used on each individual album?

RP: For the In the Wake, I will indeed be using “Snake” as much as possible, because that guitar is all over the album. For The Black Swan, I plan on using “Blue” as much as possible, because it’s just so killer sounding and holds intonation better than all of my guitars. I didn’t yet have that guitar on The Black Swan, but that’s okay - I can’t imagine playing any show without “Blue”!

Take a closer look at Ryan's guitar rig in the video below:

PRS: Is there any chance that after these shows, Story of the Year’s three most recent albums could receive the same treatment?

RP: I would LOVE to do a Wolves livestream. That is my favorite SOTY album and the songs are sooooo fun to play live. You should help me talk by band into it!

PRS: What does the future hold for the Story of the Year? Are you guys working on a follow up to Wolves?

RP: We’re essentially ready to record a new album. We actually have multiple records worth of new music, some of my favorite things I have written in 20 years, so I’m absolutely dying to get into the studio. With this music and the new team we’ve assembled, I can feel it in my bones that the new album will make a dent in the universe. I’m so excited. After we get through these livestreams, we’re going to start working out the logistics and get the ball rolling on the new album. And then we’re going to make another album. And then another. And another. And another. And I’m going to keep making albums until I’m a skeleton.

Oct. 16: In the Wake of Determination