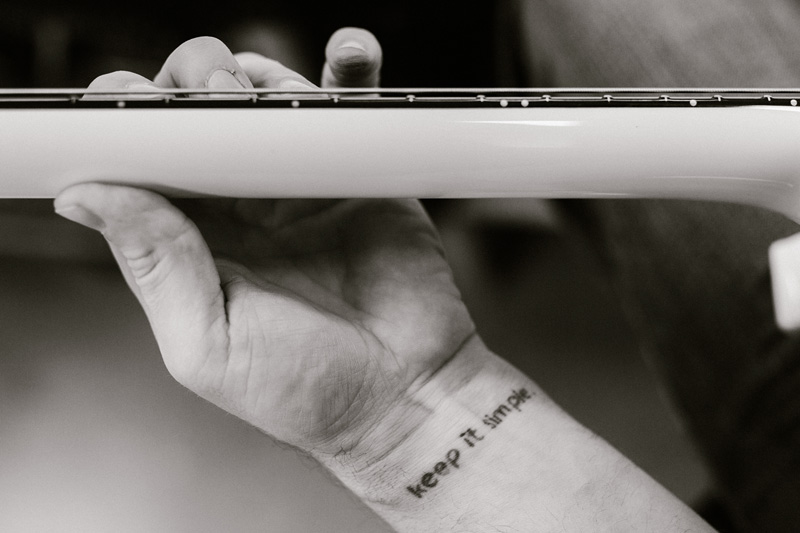 Today, Tuesday March 5th, millions around the world are celebrating “Fat Tuesday.” While most people are indulging in sweet treats and their favorite vice, we're indulging in a little #tattooculture, also we can't avoid a good pun.

Tattoos often represent something meaninful to those that bear them, perhaps something or someone that shaped their life, or a worn reminder of the past.

Below we highlight three PRS employees and the story behind their tattoos. At the bottom of this story, check out photos of PRS-fan tattoos taken by Paul Reed Smith!

James, most often referred to as 'Skitchy,' is part of the lifeblood of our service and repair center, also known as our PTC shop. He's an encyclopedia of PRS knowledge, lover of lower tunings, and connoisseur of music that might scare your mother. 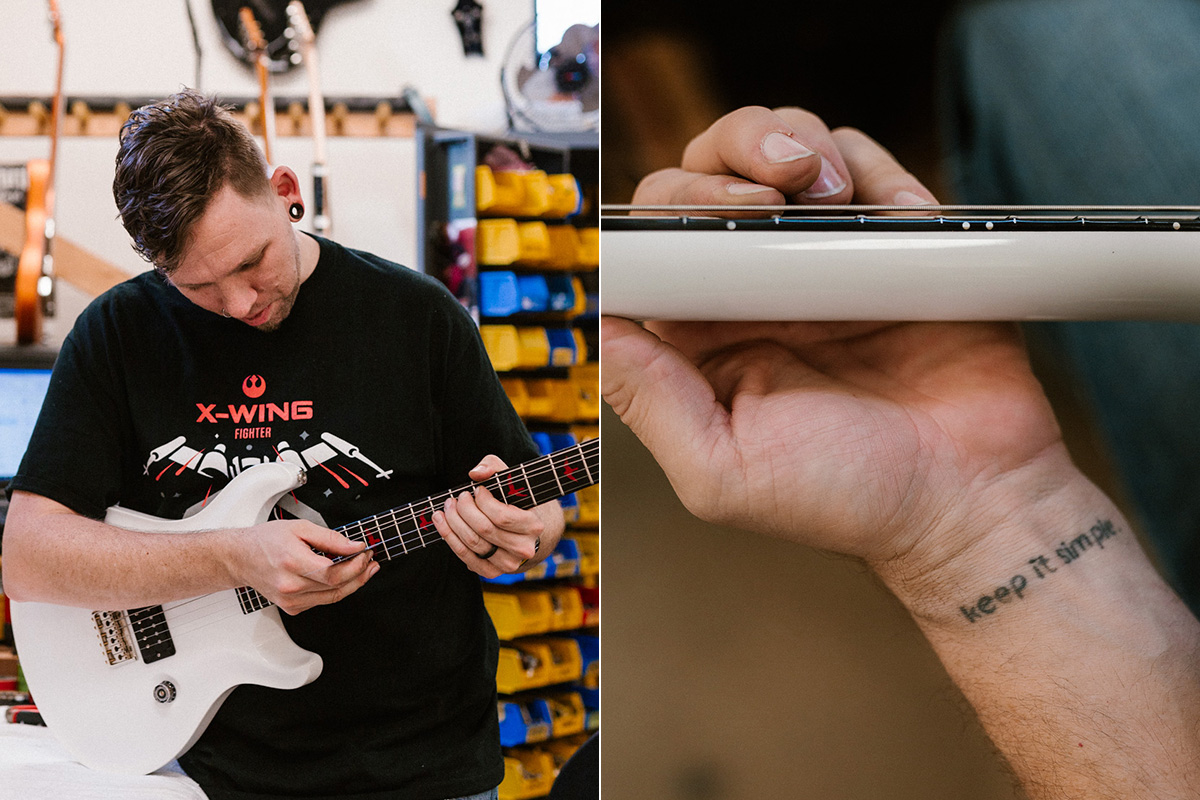 Skitchy started 'collecting' tattoos around 2000, though his "keep It simple" tattoo was done in his home around 2005. His friend was apprenticing at the time and did the work on his guitar-fretting wrist.

"I have had a terrible habit of overcomplicating and infinitely tweaking riffs, mixes, sounds, and life in general. This tattoo is a reminder to let everything live and breathe before I start messing with it. I made sure it was in a place I can see while playing and living life every day.

His favorite PRS: Skitchy's #1 PRS for the past two years has been his wife's (modified) stoptail Tremonti.

Arden Miller is a talented basecoat sander in our shop, helping guitars along in our pursuit of a beautiful finish. She loves art, photography, and music! 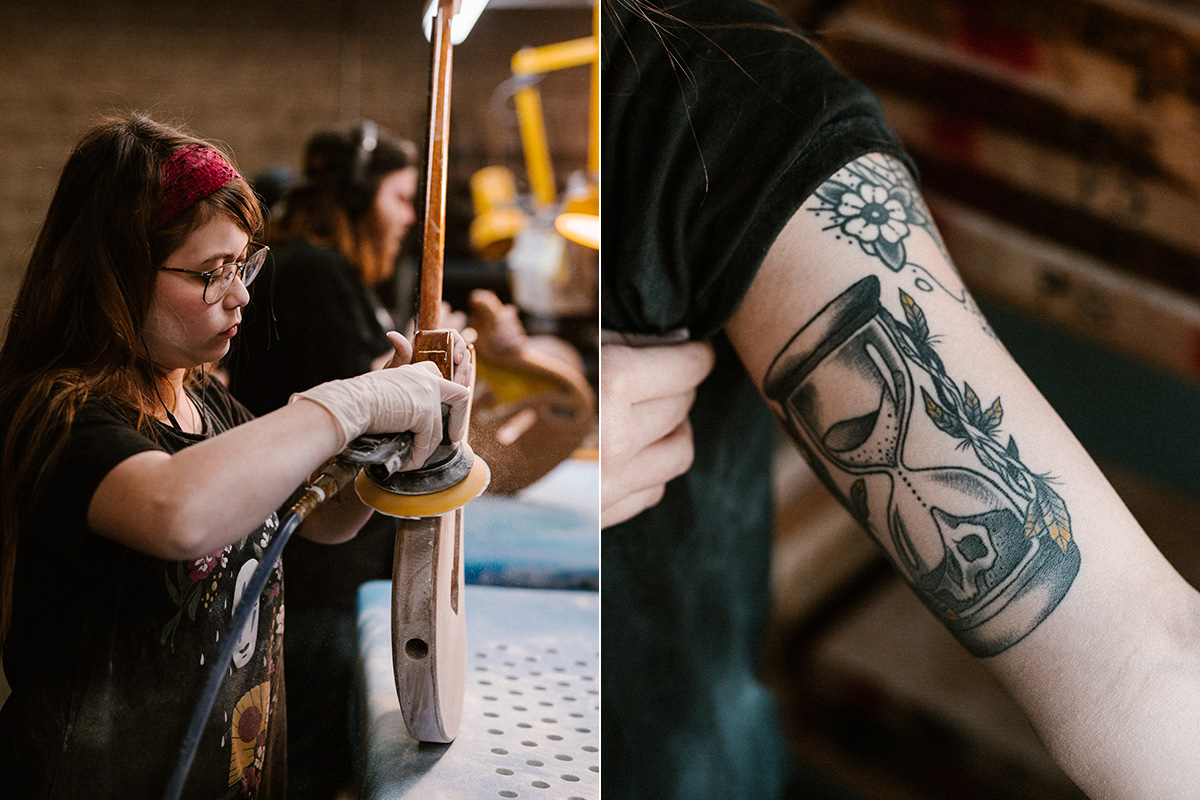 Arden knew that she wanted to have something meaningful tattoo'd on herself. She was inspired by a quote she discovered and loved, "Lost time is never found again."

"My tattoo reminds me that time is valuable and to not waste it. I’m appreciative of where I am in life right now, and this reminds me to savor each moment."

Arden is an artist so she draws and conceptualizes all of her own tattoos. Kent Liberty Tattoo in our home state of Maryland brought it to life.

Her favorite PRS: Arden's favorite is the SE Mark Holcomb model, but she's pretty fond of our McCarty Singlecut 594 as well.

Andrew is the man with the plan when it comes to PRS video content. As our in-house videographer, he brings our instruments to life by filming our product demonstrations and fun content pieces like the "From The Archives" series. He is one of the nicest folks you'll ever meet, but he also played rugby in college so watch your back. 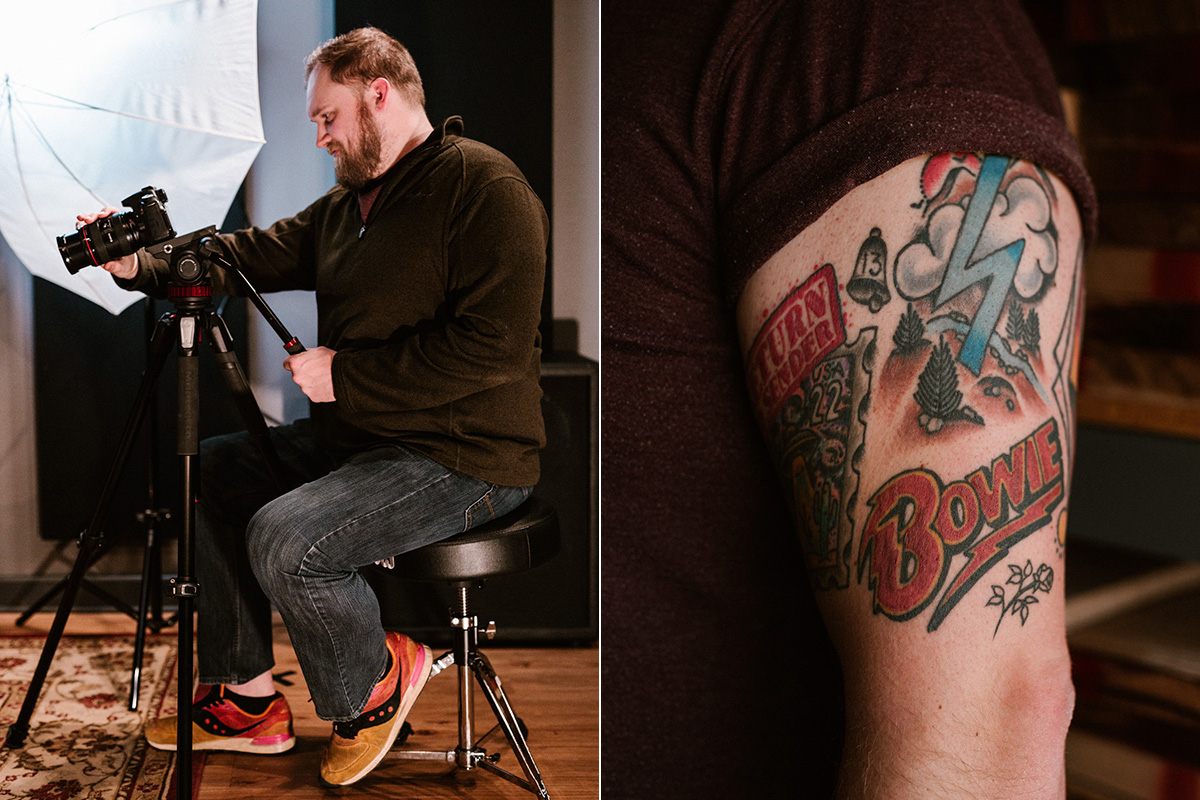 Andrew explains the inspiration behind his tattoo quite elegantly, so we'll let him take it from here:

"Someone once posed the question: What is your very first memory of music? When I was 5 or 6-years-old, my mother taught me how to use my father’s stereo. I’ll never forget the smell of that old tube amp as it warmed up. She quickly scanned a rack of cassette tapes and popped one into the tape deck. My interest grew as she pushed seemingly random buttons as the speakers crackled to life. With one cosmically swirling crescendo, a few cymbal crashes, and the flutter of guitar chords, my life was forever changed. The song was “Fame” by David Bowie. We cranked up the volume and we danced around the living room like fools. By the end of the song we fell to the floor giggling and laughing. She pushed rewind and we played it again, and again. So, in commemoration, I wanted to get a tattoo that symbolized my very first memory of music. David’s passing in 2016 was even more motivation for me to get it done.

In June of 2018, during our Experience PRS event, I had the pleasure of working with Gerry Leonard; who played guitar for David for a number of years. After we wrapped the filming of his video, we briefly spoke about his time making music with David and I showed him my tattoo. He said that he loved it and that he had just purchased a sticker of the same design to put on his guitar case. I don’t often ask to take pictures with the artists I work with here at PRS, but this was a moment I did not want to miss. 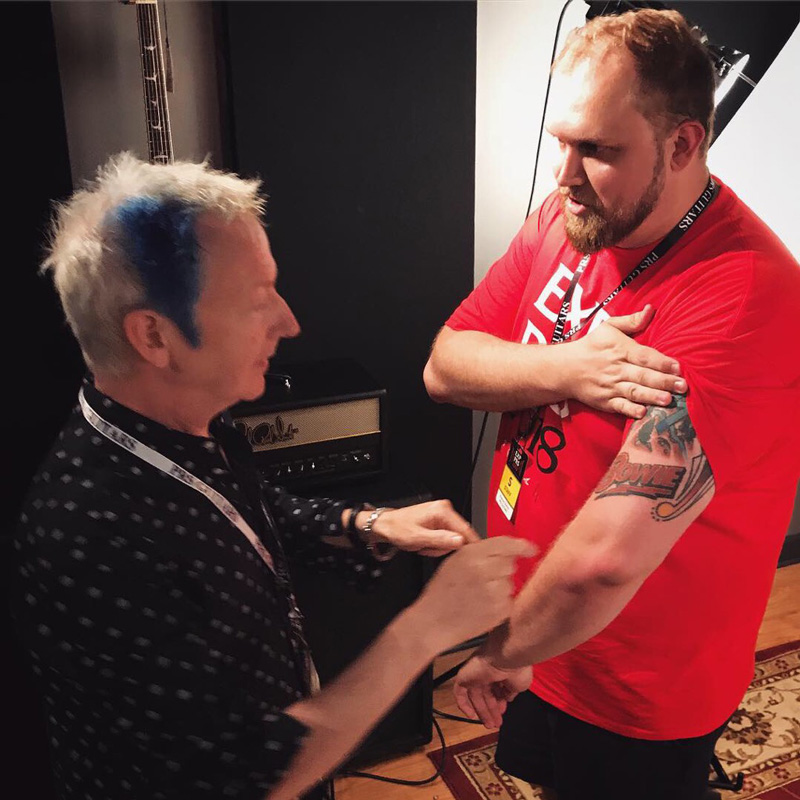 Reflecting back on those brief moments, I am in awe of the lasting impact that David’s “Fame” had on my life and the path I chose to walk. Moreover, I am eternally grateful to have a wonderful mother who sparked my interest in music altogether.”

Whenever Paul Reed Smith is at a clinic or event, he loves meeting PRS fans who have PRS tattoos! Below are photos Paul has taken of PRS tattoos this past year! 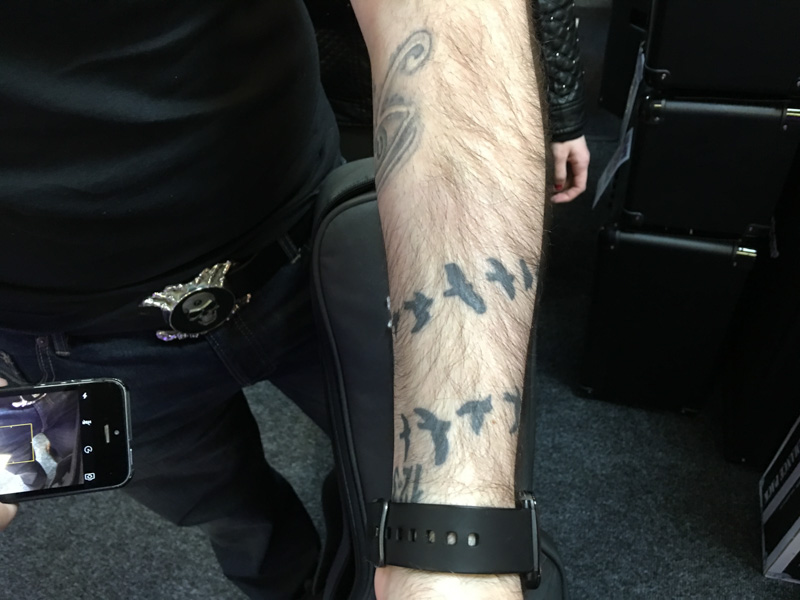 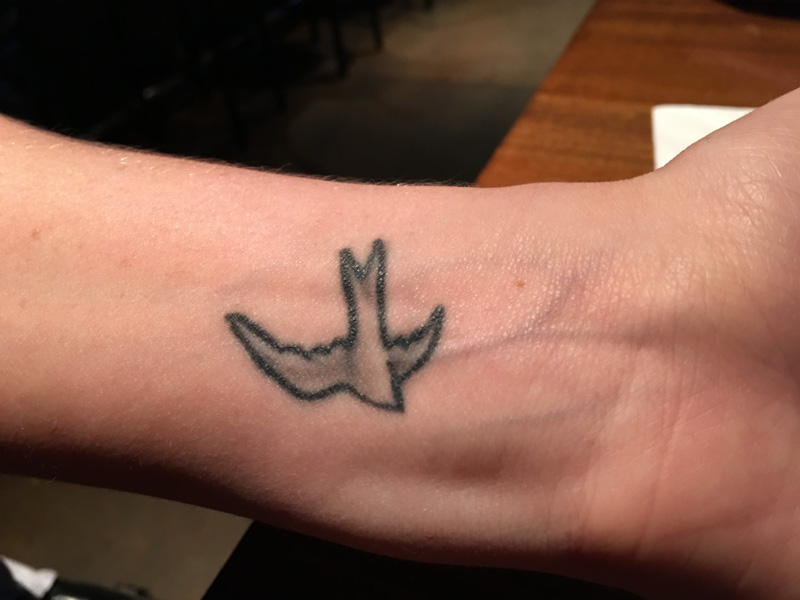 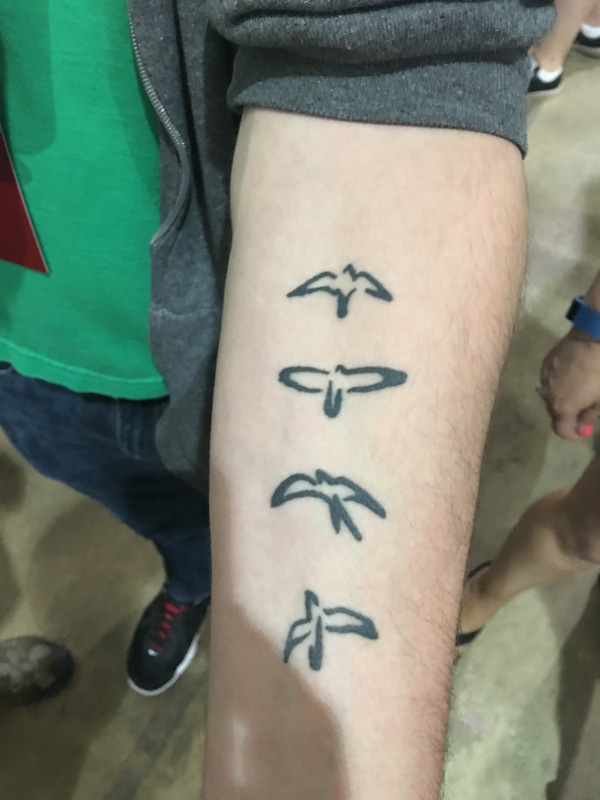 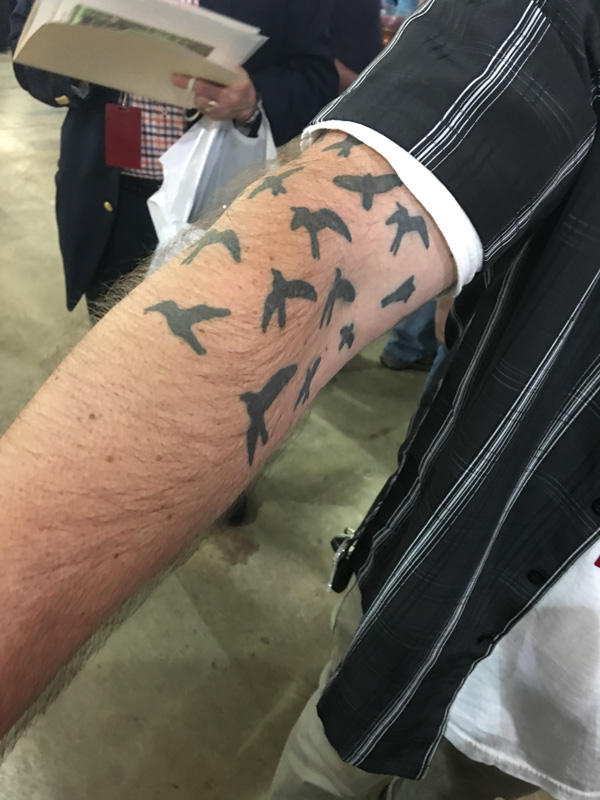 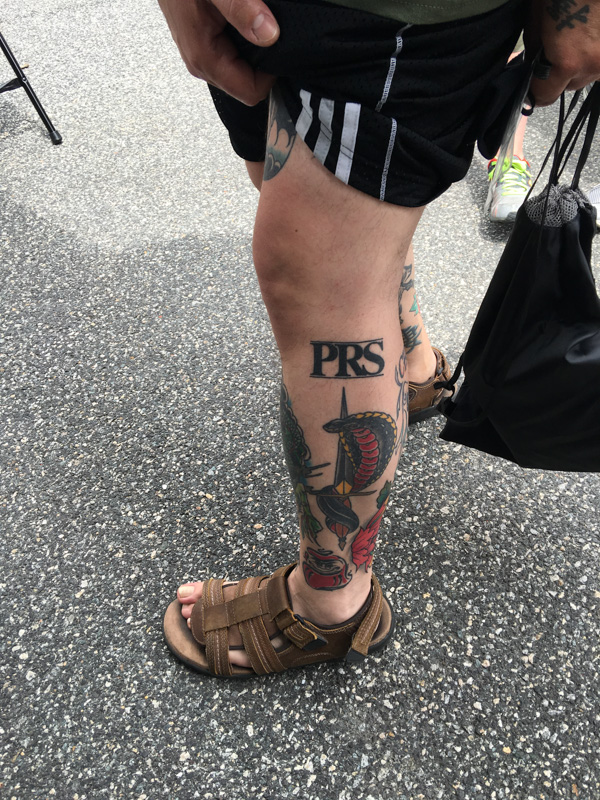 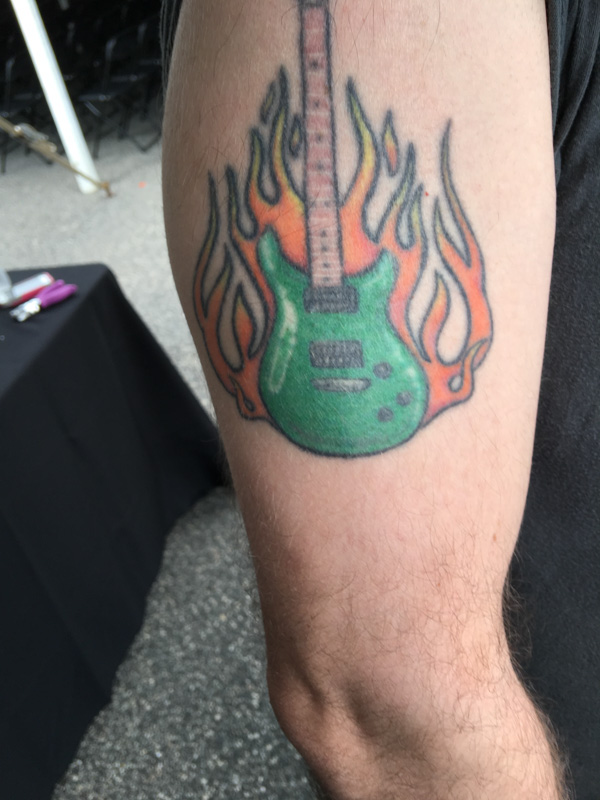 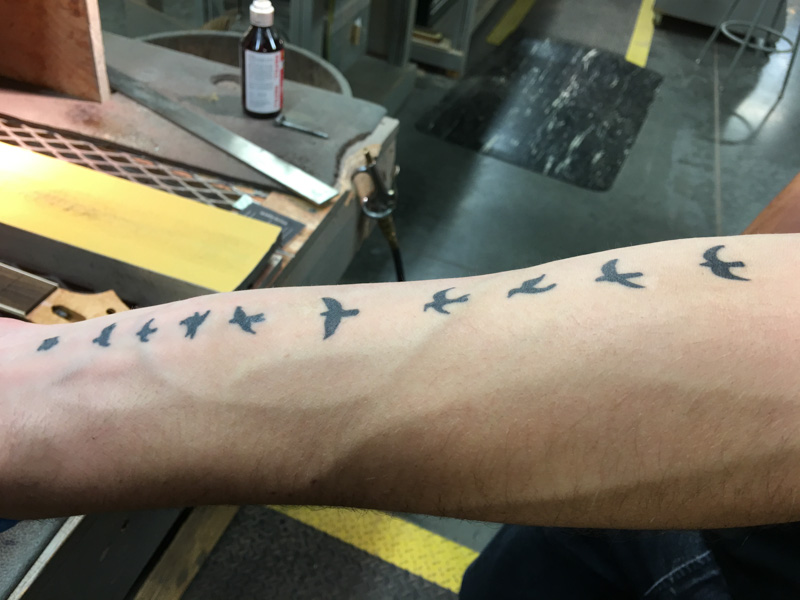 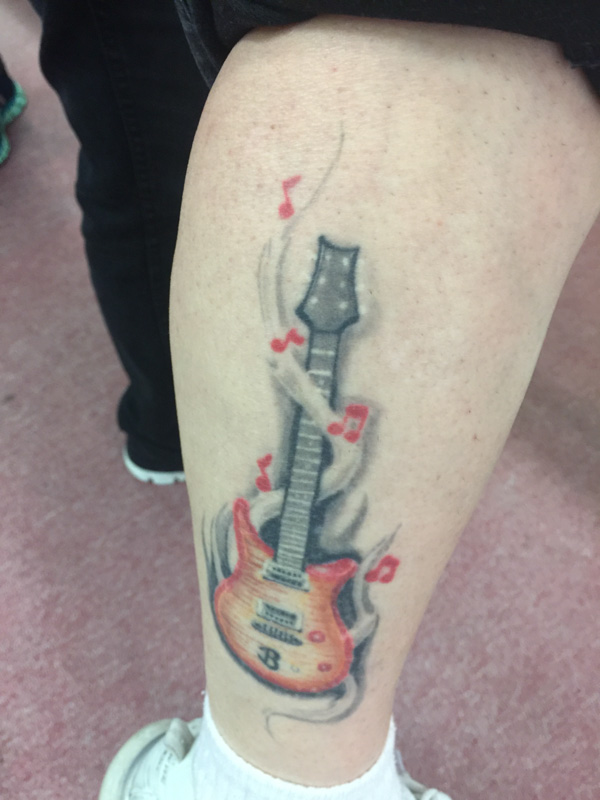 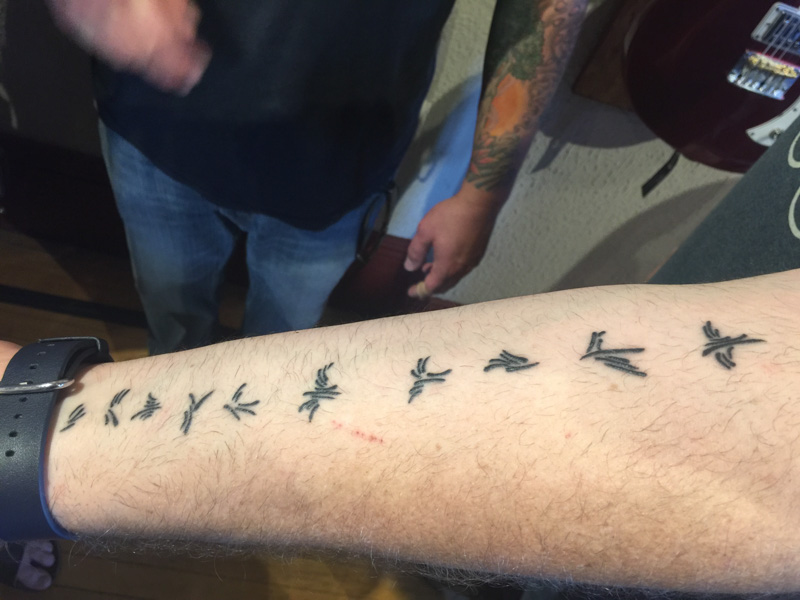 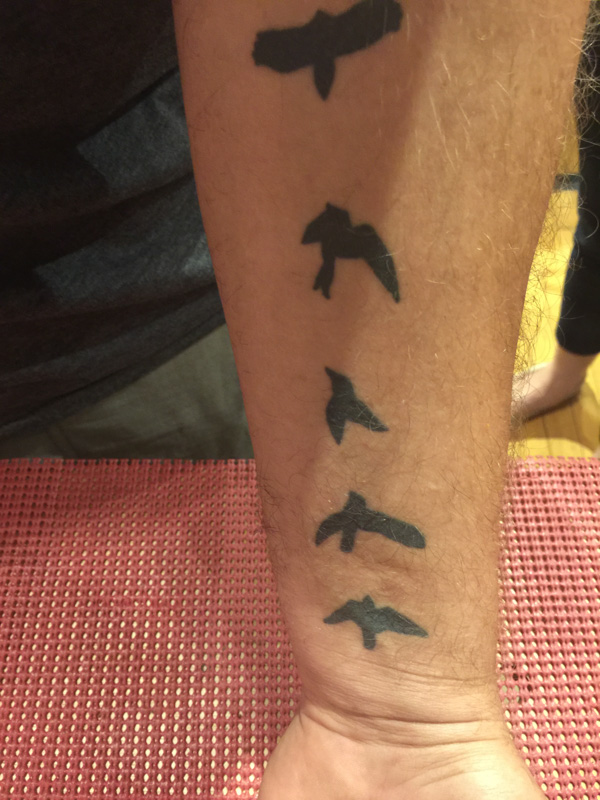 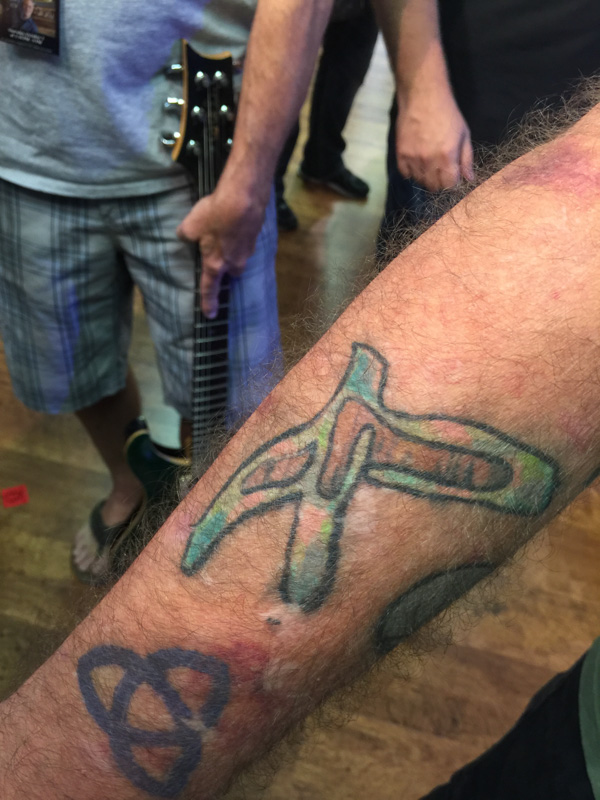 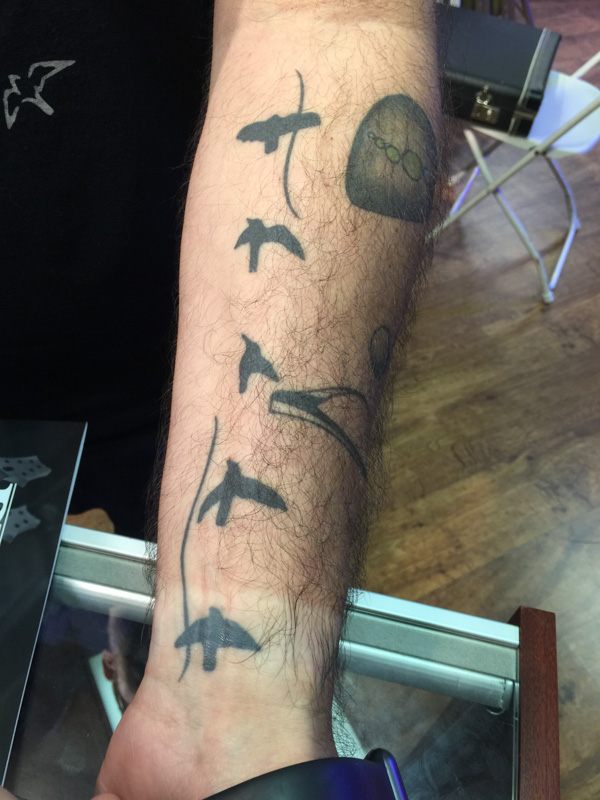 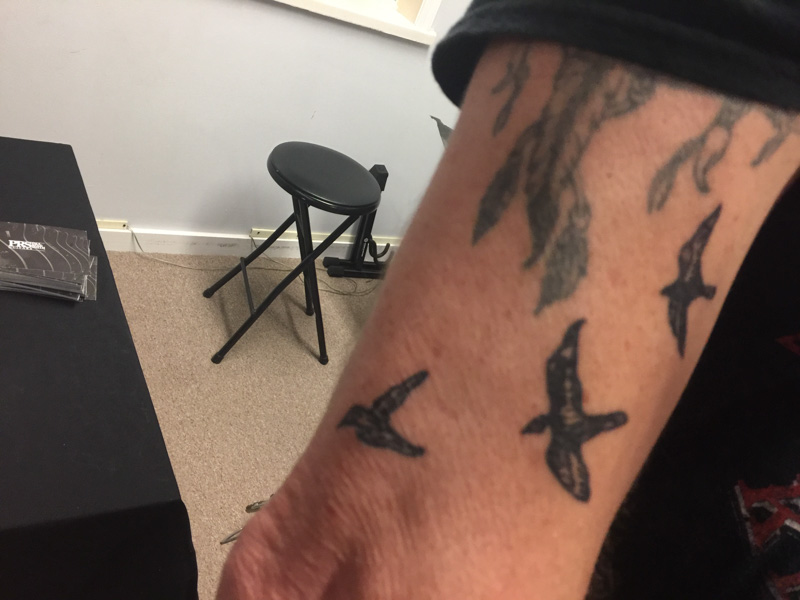 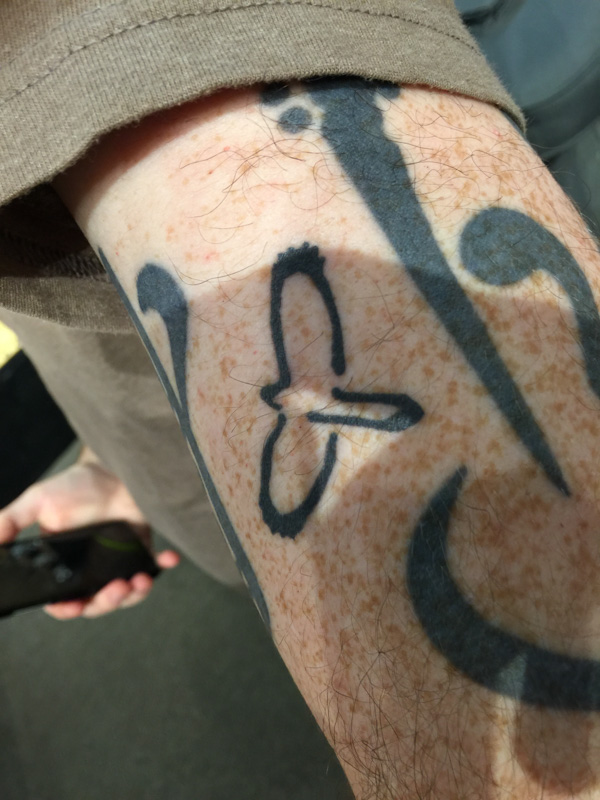 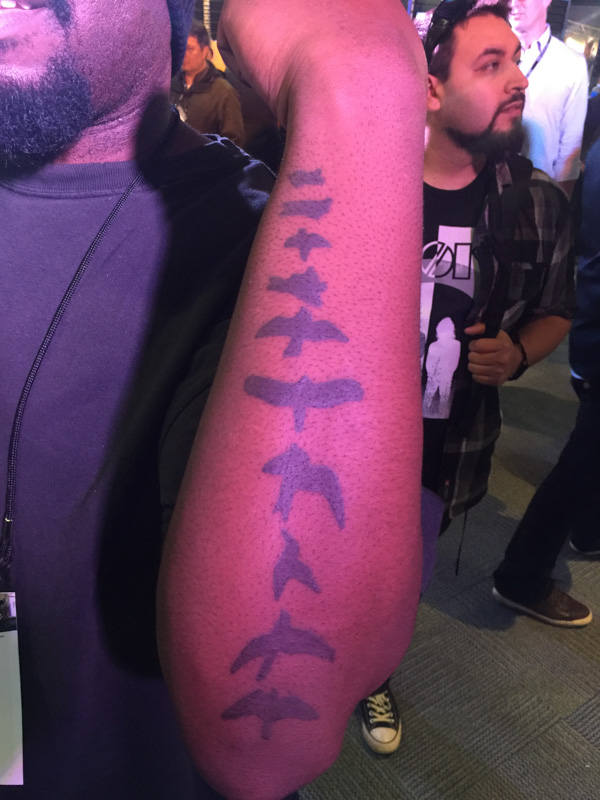 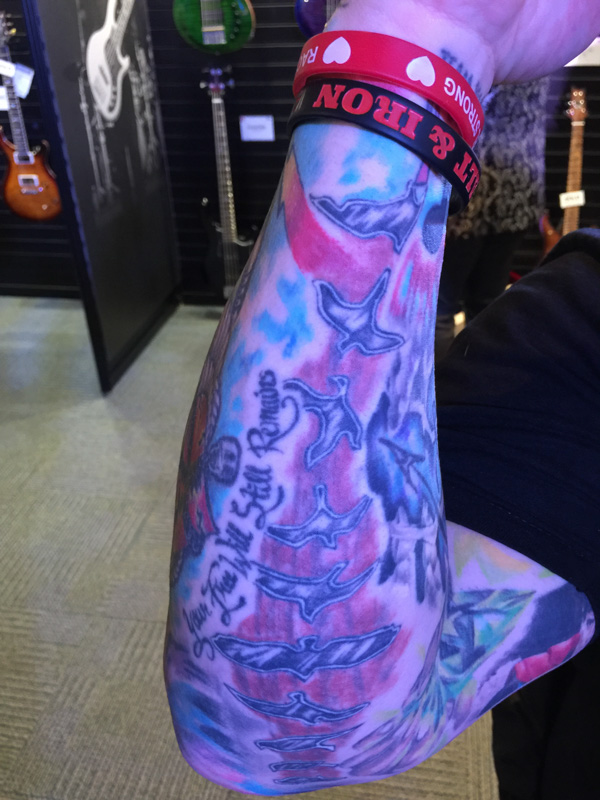 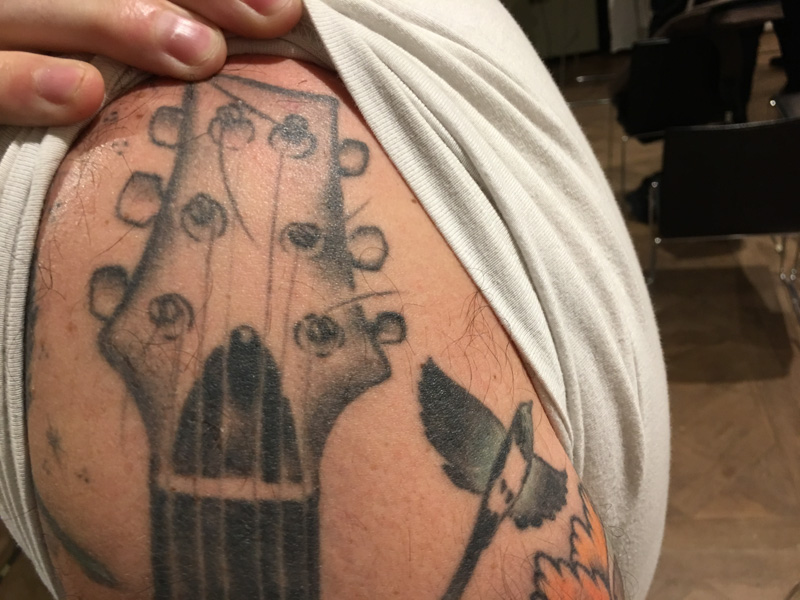 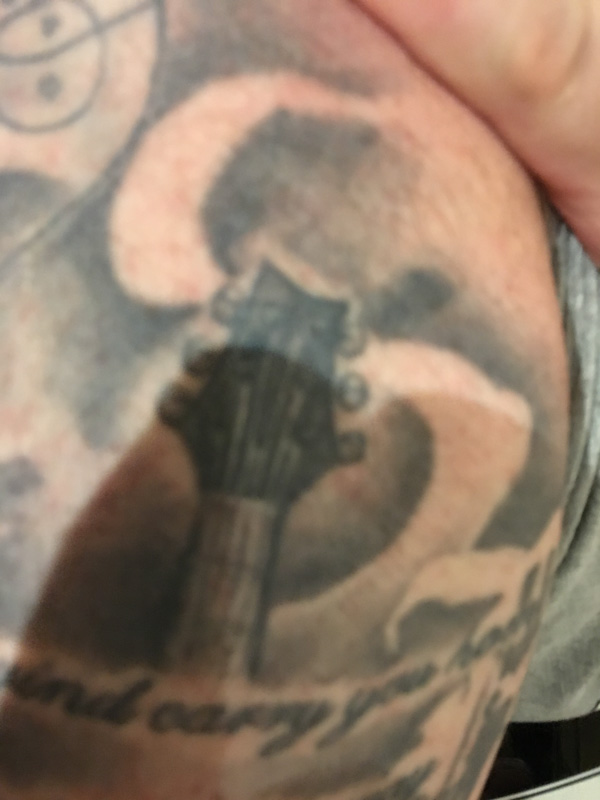 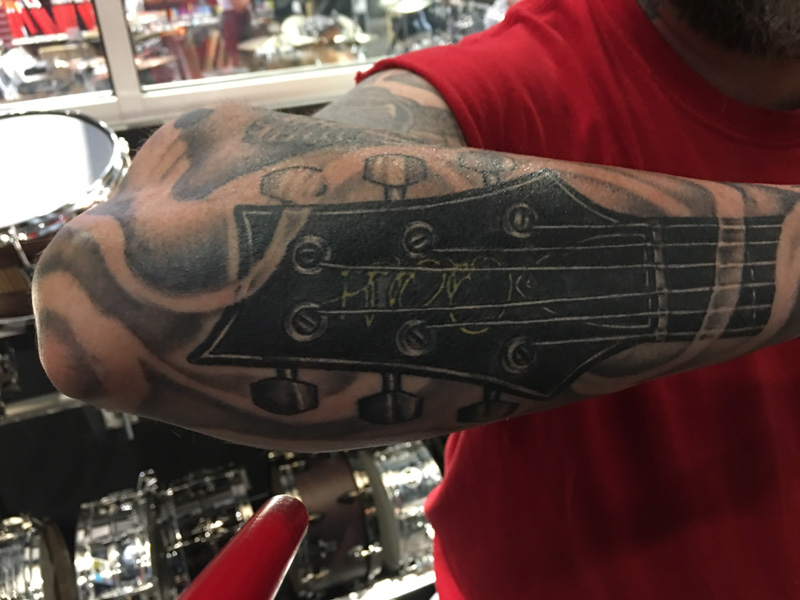 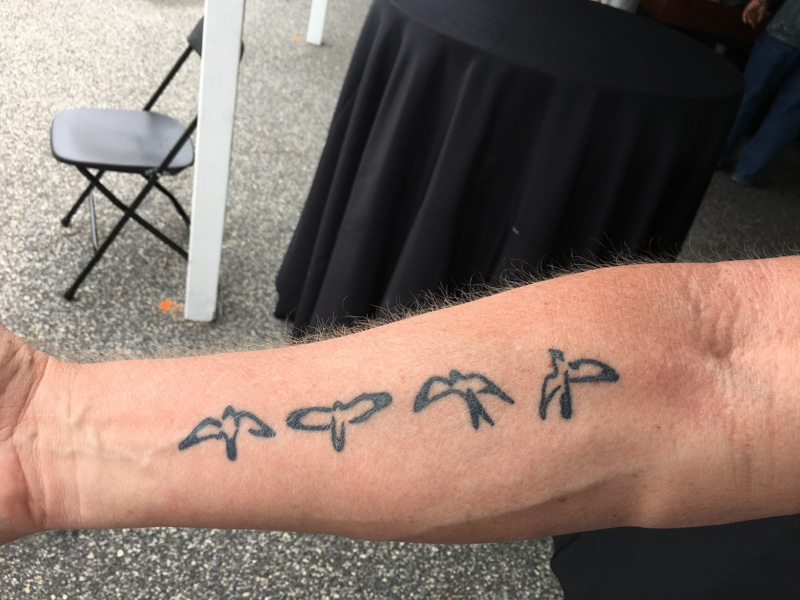 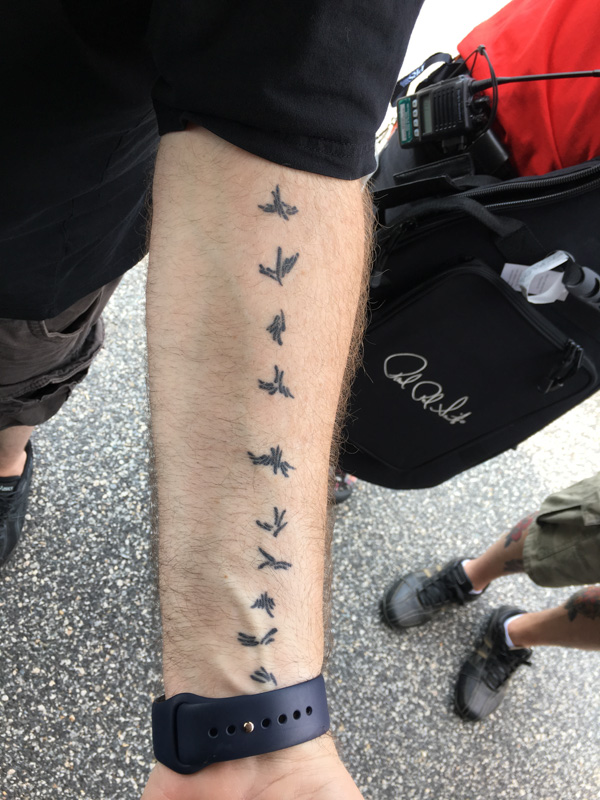 Happy Tat Tuesday! If you want to learn more about the birds people are tattooing on themselves, read the Story of the Bird Inlays here!