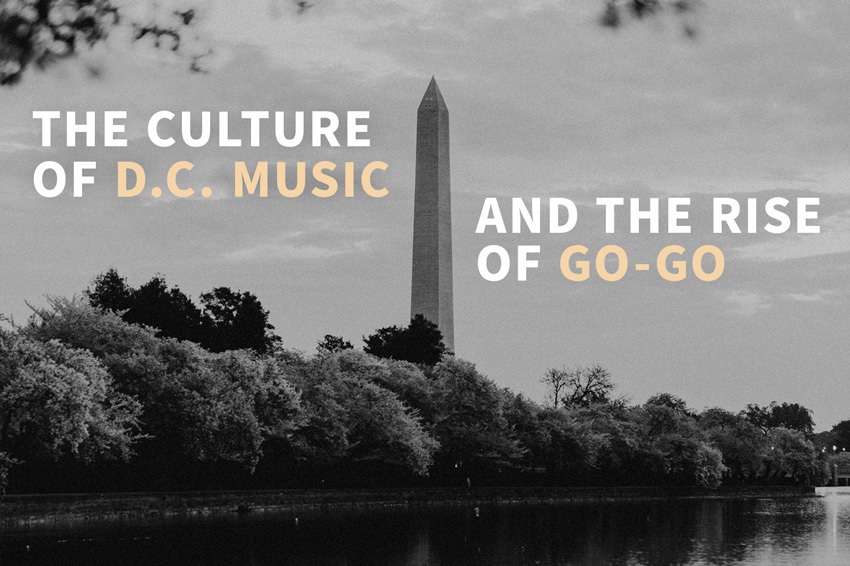 It’s unlikely for musicians to be credited for pioneering an entirely new subgenre of music, but for guitarist Chuck Brown and D.C. bands like Trouble Funk and Experience Unlimited (E.U.), that is exactly what happened.

Musicians and music fans growing up in Washington D.C. during the 1970’s were fortunate to bear witness to the exploding popularity of what was referred to as ‘Go-Go music.’ A funky, swinging, syncopated fusion of sound that put listeners into an almost hypnotic state - one where they couldn’t help but smile and move to the beat. Paul Reed Smith was one of many fortunate teenagers growing up in Washington D.C. during this time.

“During the dawn of Go-Go, I was the guitar repairman fixing guitars at Washington Music Center. In my world, people like Chuck Brown, Parliament-Funkadelic, all of these wonderful musicians that were in D.C., they were like gods to us. They played music in a beautiful way that we didn’t truly understand.” - Paul Reed Smith

To 1970’s D.C., surrounding Maryland cities, and especially the black community, Go-Go music was the sound of late-night music clubs and community block parties. Decades later, Go-Go was here to stay, being named the official music of Washington D.C. in early 2020. Even today, the sound of Go-Go, specifically Chuck Brown’s “Bustin’ Loose,” is played after Nationals home runs and on the ice after every Capitals win.

JuJu: The main ingredient in Go-Go is definitely the Congo and drums. It’s that clock pocket, which younger people today call ‘Gospel’ pocket. If you go into the history of Go-Go, Chuck Brown laid the foundation for that pocket. Grover Washington also had a large influence in the beat of Go-Go, he was like our ‘National Anthem.’

Paul Reed Smith: I had an experience about why people dance to Go-Go. I was on stage once at the 9:30 Club playing with Chuck and JuJu and I noticed at 90 bpm - nobody dances, but with the Go-Go rhythm, it’s the swing that makes people dance.

About Chuck Brown’s “Bustin’ Loose,” one of the first charting Go-Go singles.

Paul Reed Smith: When I was in New Orleans, the theme song the whole time I was there was “Bustin’ Loose” - I heard it in the cab, I heard it at the famous club Tipatina’s, I heard it at restaurants. They played that tune constantly.

Tom Goldfogle: That song changed a lot of people’s worlds, I remember people telling me that song changed the way they thought about music. It really had a renaissance in music and has been used in so many recordings.

The Spread of Go-Go Music

On the topic of charting Go-Go singles and the spread of this unique genre of music, Paul Reed Smith noted the rise of D.C.-based band Experience Unlimited (E.U.) and their 1988 hit single “Da Butt,” which was featured in Spike Lee’s movie School Daze.

Paul mentioned, “Along with ‘Bustin’ Loose,’ ‘Da Butt’ got worldwide acknowledgement of Go-Go and then Go-Go started to become huge in Europe and Japan.”

Tom Goldfogle echoed Paul, “As the excitement around Go-Go circulated in the US it also flowed overseas. In Japan especially, they follow black music in the US and Europe. I remember traveling over to Japan with JuJu and he was so revered over there; they rank him in their lists of top drummers. They know every word of every song - it’s just incredible.”

An interesting factor that led to the spread and popularization of Go-Go music was the portable boombox recorder - a staple of the 80’s. Music fans would bring their boombox to musician’s performances and record, later making copies and sharing the tapes with their friends and playing the recordings for the neighborhood to hear.

Tom Goldfogle commented on this, “The use of Boomboxes was really the way the music spread, it was a brilliant promotional tool. Chuck Brown used to tell people, ‘follow my orders and bring your recorders.’ He wanted people to come to the show, bring their boombox, tape the show and get those tapes out in the street. It would amp up the popularity of the band.”

The Scene Inside Music Clubs

JuJu: Moonlight In, Benedict Pier, Club LeBaron in Palmer Park, there were a ton of clubs, I can’t even think of all of the places we played. Go-Go was our way of survival, and it ran a close race with hip-hop. Go-Go had its following and hip-hop had their following. Go-Go was family oriented and neighborhood based. You would look out into crowd and it would be lined up with boomboxes, people would come to the Go-Go to make their tape, they would dub the tapes, pass them out, and they would become the album of the neighborhood.

Paul Reed Smith: The music scene in D.C. was magic. It was flat out magic, the music that was going on was food you could not get anywhere else. The Bayou, The Keg, The Cellar Door, Apple Pie, I can name so many of them - I lived in many of them. To be able to rub shoulders with this music scene was such an honor.

Music Clubs were the meeting place.

Paul Reed Smith: D.C. is a cauldron of good musicians, always has been. New York has a scene, Atlanta has a scene, Boston has a scene. D.C. has as big a scene as all of them - huge, gifted, and powerful. If I went to a teen club when I was 12 or 13 years old, it started with (singing: ‘I know you want to leave me’) - it started with black music. It was everywhere, and it wasn’t going to go away, it was just so cool.

A distinct aspect of Go-Go music is the interaction between the musicians on stage and the audience. Chuck Brown would shout out to the crowd and listen as hundreds of people would holler back, all perfectly timed with the music.

We asked Tom, Paul, and Juju about this important piece of Go-Go music, here’s their conversation:

Tom Goldfogle: Even though call and response may have existed before the rise of Go-Go, it became one of the pillars of Go-Go. Also, with live bands, when the music stopped, people stopped dancing and left the floor. Chuck kept the beat going in between the songs and used that beat to talk to the audience, rap on top of the beat, or get a call and response going. That really transcends all live Go-Go music today. It’s an integral part of every show, and with the audience becoming part of the band, it becomes more of a community.

JuJu: Today with Go-Go you can get a good hour in, back then you would do 3 hours, 4 hours nonstop. Your break was a ballad, if someone sang a ballad you would thank God. Another thing about the call and response…people would come up to the stage, write their name on a piece of paper, and I would see hundreds of pieces of paper in a pile on stage. Chuck would pick up a piece of paper and work it into the call and response: ‘We’ve got Sweet Boo, Tom, and Rick in the house.’ People would bring that piece of paper to the stage to let you know that they were there. By bringing that piece of paper to the stage, you know you were going to get your name called and make it onto the CD or cassette. Your neighborhood would be proud if your name made it onto the tape.

Paul Reed Smith: It’s actually brilliant, JuJu. When I was playing in Chuck’s band with you, there were pieces of paper coming up to the stage constantly. It’s like getting your photograph taken with the band, it’s your version of that. Look, what we’re reflecting on here is this huge black music scene and the music scene in general in D.C. over the past decades. You know, I remember something about the 68’ riots that happened in D.C. The person that came on TV to calm everybody down and get the riots to end was the Godfather of Soul, James Brown. Musicians have always been revered and danced to their own drum in the D.C. corridor.

Paul Reed Smith: I met Chuck at the Bowie Performing Arts Center, and he loved the tone of my guitar, and he said to me, “I’ve gotta have that sound.” When I met him, he had one of the most beautiful, monstrous, non-mean egos - not in terms of ‘I’m better than you,’ but that he was just larger than life. Over the term we became friends, and he looked after my band. To have the Godfather of Go-Go, ‘let me in’ is such an honor.

We asked JuJu for his thoughts about Go-Go being named the Official Music of Washington D.C. in 2020.

JuJu: I’m proud of it, but I’m a little pissed because I wish that it had happened sooner and some of the people like Chuck who had invented this music were still alive to experience the honor.

Thank you to our friends Tom Goldfogle and JuJu House for sharing stories and memories about this notable time in Washington D.C.’s music history.

This piece was put together to celebrate Black History Month and the profound impact of black music on our local music scene and the world at large.