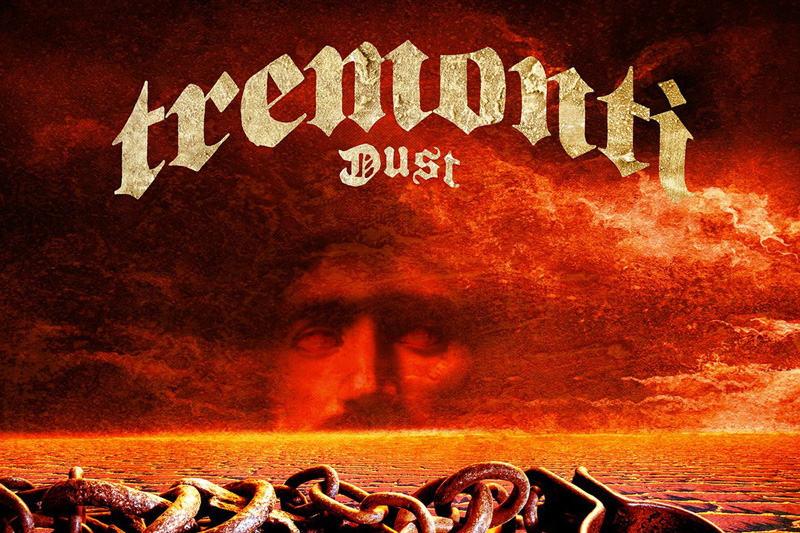 After the recent announcement of Tremonti’s third album Dust, scheduled for release on April 29th via Fret 12 Records, the band has released a lyric video for the title track and debut single. -- Dust premiered yesterday on Sirius/XM’s Octane channel. The lyric video contains imagery from both Cauterize and Dust albums as the backdrop behind the moving lyrics. Check out the video below!

“Dust is about how it feels to watch a close friend lose confidence in you,” describes Mark Tremonti. Dust was recorded during the same sessions as the band’s last release, Cauterize and features Mark Tremonti on vocals/guitars, Eric Friedman on guitars, Wolfgang Van Halen on bass and Garrett Whitlock on drums. The album is now available for pre-order on iTunes. Fans who pre-order the album via iTunes will receive an instant download of the single “Dust.” On March 25th, April 8th and April 22nd, another song will become available for fans that have pre-ordered the album. Several exclusive fan bundle pre-orders are also available here. These bundles include autographed CD’s, t-shirts, hoodies, and other exciting experiences for the Tremonti fan. Long-time friend and collaborator, Michael “Elvis” Baskette, produced Dust. From the first riffs of album opener “My Last Mistake” to the final notes of the closer “Unable To See,” it is apparent that Dust is not a collection of B-sides or leftover material. These ten new tracks continue to showcase Mark’s hard rock/heavy metal influences alongside the material from Cauterize. Songs like “Once Dead,” “Betray Me” and “Rising Storm” hold their own place as weapons in Tremonti’s musical arsenal. The track listing for Dust is: My Last Mistake The Cage Once Dead Dust Betray Me Tore My Heart Out Catching Fire Never Wrong Rising Storm Unable To See Tremonti will be heading to Europe later this Spring in support of Dust. The band will be making stops at some of the largest festivals in the world including Hellfest, Graspop Metal Meeting, and Download Festival. Aside from the festivals, the band has several headline dates confirmed as well as a few shows opening for metal legends, Iron Maiden. Mark Tremonti is the Grammy Award-winning guitarist and songwriter known for his work in the critically acclaimed Alter Bridge and in the multi-platinum rock juggernaut Creed. Having sold over 40 million records worldwide, this is the man behind massive hits like "My Own Prison", “Higher", "Isolation" and “Addicted To Pain.” His sound is recognizable and has garnered him a loyal fan base worldwide. Guitar World dubbed him "Guitarist of the Year" three consecutive years in a row, and he ranked as the "fourth greatest heavy metal guitarist ever" in Total Guitar.