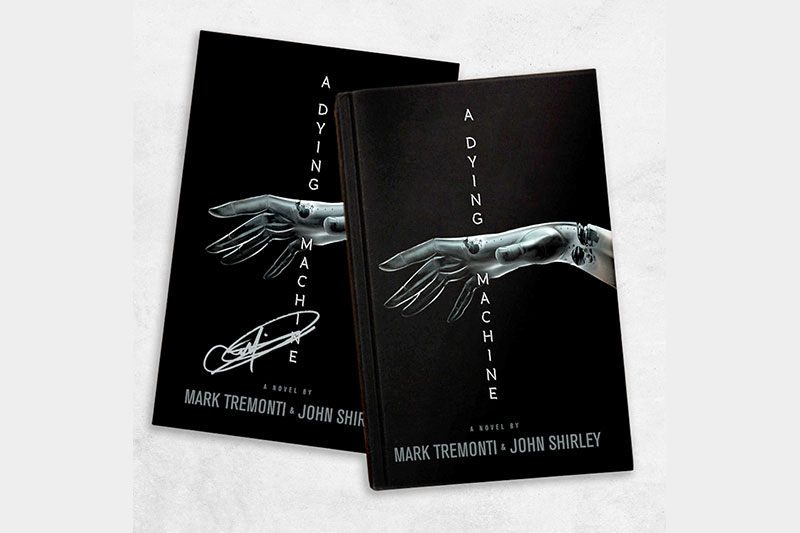 PRS artist Mark Tremonti recently released a sci-fi book to accompany his latest album, A Dying Machine. Tremonti paired up with John Shirley, a Texas-based musician and author who specializes in the world of fantasy and science fiction. Tremonti's album, A Dying Machine, was released in June 2018 and was the first concept album of his career. Check out the title track below:

The novel is available for order now, read the synopsis below: When Brennan Gibbons' beloved wife Eleanor dies, so does the renowned architect’s career. On a fluke, Brennan enters and wins the 22nd Century Lottery to be one of the few people able to buy a first generation Vessel – an artificial human, part flesh, part machine, created to be the perfect partner. Though slightly dubious, Brennan brings Stella home, with the hopes that she can help him re-engage with life, without replacing his dead wife. At first, Stella is everything Brennan could desire in a partner, but Stella is not entirely human. Her robotic parts make her better, stronger, and faster. Yet as time passes, Stella begins to develop her own personality and free will--along with a dark obsession. 'At the same time, the Vessels created to be the bodyguards for the rich and powerful board members of Fusion Flesh are realizing that they too have free will. Bred to be killers and forced to serve as confidants and lovers, these Vessels realize that they have the tools necessary to fight for the rights of their kind. Led by Ares, the bodyguard of Fusion Flesh CEO Maggie Coogan; the Vessels band together to form a ruthless guerilla unit to overthrow those who control them. 'A Dying Machine weaves a tale of two stories: that of Ares and Stella - highlighting human folly through the creation of seemingly perfect beings... Beings who ultimately want what all people want: the freedom to love and live.' -- Learn more about Tremonti's signature PRS guitar & amplifier.